I was in the grocery store today, fixing to buy a jar of jam. The last kind I bought was a no-sugar variety, and quite tasty, but this time I wanted something that would have actual chunks of fruit in it. As I looked at the options on the shelf, I realized I didn't know the difference between jam and preserves. I ended up going with the low-sugar jam because when I picked up the jar and squinted at the contents, I thought I saw some fruit pieces in it. Turns out, I should have chosen differently.

The thing that makes all of these spreads hang together is pectin. Pectin is an undigestible carbohydrate (fiber, actually), contained in the cells of fruit. When you heat this with sugar and water, it makes a gel. This gel is essentially the base in which the jammy fruity goodness is suspended.

Posted by the apple lady at 11:22 PM No comments: Links to this post

I'm having some black cherry ice cream. Right now, as I'm typing this. Very tasty. The best part, of course, is the huge hunks of black cherries. 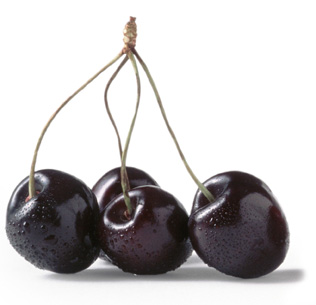 Posted by the apple lady at 11:33 PM No comments: Links to this post

I've been reading John Cheever's Journals (I might do an Apple on him, but not today). In 1976, he was at the worst of his drunkenness, to the point of not remembering how he wound up in a hospital in Boston and got transferred to a dry-out facility. That same year, he published one of his many novels, Falconer.

At the time, I thought 1976 was somehow an unusually important year. Ever since, I've noticed when 1976 comes up. And here is a list of some of the things that happened that year. Some were good, some were bad, but all in all, I think I was right to call it important.

POTPOURRI (In the Jeopardy! sense of the word)

Rather than doing one entry on one subject, I thought today I would note a few little factoids I have uncovered recently, on miscellaneous subjects:

Posted by the apple lady at 11:43 PM No comments: Links to this post

I have a sore spot on my tongue, where my teeth have been rubbing against it. This made me think, I know the tongue is a muscle, but is it more complicated than that? And of course, the answer is yes.

Sources
My copy of Gray's Anatomy, dated 1977. There's also a Gray's Anatomy online, but I didn't get very good results searching that.
By the way, the TV show is spelled GrEy's Anatomy.

Posted by the apple lady at 10:03 PM No comments: Links to this post

It's been raining quite a bit lately. Every time I carry an umbrella, I think, "What a great invention." It's simple, and it's genius.

A couple under an umbrella in Laos
(Photo from Cringel's blog)

Sources
"Who Invented the Umbrella?" Mary Bellis, on the Inventors pages at About.com
"Umbrella" entry in the Columbia Electronic Encyclopedia, accessed through InfoPlease
"Jonas Hanway" entry in the 1911 Encyclopedia Britannica
Posted by the apple lady at 12:44 AM 2 comments: Links to this post

Every once in a while, my brother likes to pose the question, "What do you think David Lee Roth is doing right now?" Of course, one can only speculate. Our typical answers have included such things as eating pizza and watching basketball, scratching his chest, flossing, etc. While I can't find information that will answer my brother's question definitively, I can provide some more background about Mr. Roth that may help us in our speculations.

For those who may not know, David Lee Roth was the dynamic front man for the 1980's smash hit band, Van Halen. He all but trademarked wearing spandex pants, doing the leaping splits, and shouting "Whooo!" into the microphone.

Here are some quotes from Mr. Roth, as recorded at the fansite, the Diamond David Lee Roth Army: 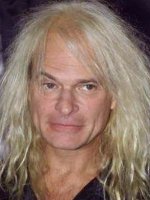 Posted by the apple lady at 11:10 PM 2 comments: Links to this post

The last entry was pretty long. Here's a short one. About shrimp, ha-ha.

This is what shrimp look like after you take them out of the water, before they hit the market or your plate:

Shrimp live all over the place, in salt or fresh water, in wetlands and in the open sea. They eat algae, microscopic organisms, and other little plants or animals.

They swim by paddling their "abdominal swimmerets."

I've been getting that I'd-like-to-visit-a-tropical-island-feeling lately. Since that's not going to happen, I thought I could at least write a blog entry about some islands. So I looked at a map and decided on the Bahamas.

Each of the islands are quite different from each other in landscape, history, and flora & fauna. Some of the islands that you may or may not have heard of include:

I think, of all these, I would pick Andros. I'm curious about those coral reefs and deep blue holes. And you? 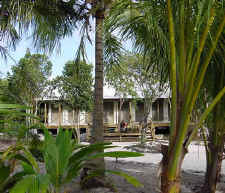 This place, called Tiamo Resorts, has 11 beachfront bungalows, each with one king bed in a 600 square foot room. Snorkeling at the blue holes is only one mile away, and the beach is right outside. (If you want to kill the fantasy and find out how much it costs, click here)

Sources
Geographia.com's site on The Islands of the Bahamas
First photo from the Out Islands of Bahamas Hotel Finder
Second photo from Bahamas Travel Info, Tiamo Resort

Posted by the apple lady at 5:27 PM No comments: Links to this post

So I was eating some Swiss cheese yesterday, and I wondered, what makes the holes in this cheese? The answer, it turns out, is "gassy bacteria."

About cheese in general:

Sources
Why Does Swiss Cheese Have Holes in It? Ask Yahoo, June 10, 2002
Swiss Cheese Recipes and Cooking Tips, by Peggy Trowbridge
The Basics of Making Cheese, Early Cheesemaking in Scotland, part of a course taught through the Edinburgh Business School
Rennet for Making Cheese, David B. Fankhauser PhD, Professor of Biology and Chemistry, University of Cincinnati Clermont
Photos from a cheese website in German and The Cook's Thesaurus

Posted by the apple lady at 5:58 PM No comments: Links to this post

A friend of mine recently told me he's getting married this summer. He's a little overwhelmed by all the details and the planning. Maybe some of these statistics will help him feel better.

So I had to find out, why Gatlinburg. The Gatlinburg website says it's the "wedding capital of the south." They give lots of reasons: it's pretty because it's near the Smoky Mountains, it's centrally located for half the population of the US, there are all kinds of romantic hideaways, etc. But the real reason may be this one:

"It's also easy to get a marriage license in Tennessee. There's no blood test and no waiting period. Plus, here in Sevier County, the wedding license is only $38.50 for out-of-state couples and $98.50 for Tennessee residents."

Oh, and one last thing. Did you know, the current, widespread conviction that the diamond ring is the only acceptable kind of engagement ring is because of an advertising campaign?

Sources
(Some of this data is kind of old, by the way. A few of the sources reference things going back to 2001 or 1998.)
"Statistics on Weddings in the United States," SoundVision.com
Statistics for the Wedding Industry, Association for Wedding Professionals International
Valentine's Day Facts for Features press release, US Census Bureau, December 16, 2004
Tips & Stats at SelltheBride.com
Bridal Industry Statistics at The Knot.com
Gatlinburg, Tennessee Chamber of Commerce website

Posted by the apple lady at 1:20 AM No comments: Links to this post