Recently, an intrepid reader asked for information about a woman named Barbara Lauterbach. I happen to have a cookbook that she wrote, which is all about potato salads.


So let's find out more about Barbara and perhaps her potatoes.

This is Barbara
(Photo from the King Arthur Flour Company)

This Barbara's Moulton Farm Potato Salad, with fingerling potatoes, zucchini, yellow squash, peas and peppers in a Dijon and tarragon sauce.
(Photo from her website)

Sources (many of which include some of Barbara's recipes)
Barbara Lauterbach
King Arthur Flour, Our instructors
Chef2Chef Recipe Club, Volume 3 Issue 041, August 26,2002
"Chicken Salad with an Attitude," Cincinnati Post, July 30, 2003
Posted by the apple lady at 4:03 PM No comments: Links to this post

Not much time, about to leave for out of town for a few days. Won't have access to the Apple, alas. In the meantime, I'd like to note that my site statistics tell me that someone from the USDA stopped by the other day. And not just to browse about something for fun, but to find an answer to an actual question. How do I know this? Again, my site stats told me that this person used a search engine and the words typed into that search engine were thus and so. And the thus and so words actually had to do with USDA-type work.

So, it's possible that the Daily Apple helped answer some agricultural question, helped advance the cause of feeding our nation, of caring for our plants or our animals or ourselves. Think of that.

What you are witnessing here is a little Apple Lady pride.
Posted by the apple lady at 8:09 PM No comments: Links to this post

The other day, an intrepid young Alice Fox asked the Apple Lady the following question:

I'm visiting relatives this summer, and I'm confused by the whole first, second, third cousin thing. Also what's with once, twice, thrice removed? Can you tell us what these distinctions mean? Thanks.

The Apple Lady has wondered about these relationships herself. She has heard definitions explained before, but she can never remember what they are. So here are the answers:

Already this isn't helping, so I've made a family tree. 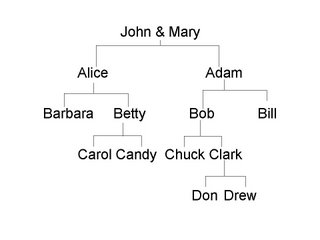 In reference to the family tree above, we'll talk about Betty, and how various people are related to her.

Does that help? I feel like I've got it, finally. If you want to see another depiction of the same thing, check out Eastman's Online Genealogy Newsletter.

Also, the above definitions have evolved over time. If you're digging back into your family history and you come across someone described as a "cousin," that might mean something different than it does to us today.

Everyone has approximately 4 trillion 20th cousins. Which means essentially that everyone is somehow related to nearly everyone else.

We've had a request. Actually, several requests from one reader:

Hows ‘bout one on Nintendo, or bottled water, or Emma Goldman, or computer fonts, or bed bugs, or watermelons.

These ideas all have the potential to generate interesting entries, but depending on the number of requests I get (and the response has been overwhelming -- that's sarcasm), I might not get to all of them. For some brief information about bed bugs, please see an early entry of mine on mattresses.

Since I just bought a watermelon at the store yesterday and ate some of it with dinner (it was delicious), I thought that watermelons might be an appropriate entry for today.

This is Professor Maynard, of the Gulf Coast Research and Education Center at the University of Florida, sitting atop a pile of watermelons. Notice the different varieties of melons in the pile.
(Photo from the GCREC, U FL)

Watermelons for sale in Cairo, Egypt
(Photo from a blog about Cairo)

My calendar says that today is Lag B'Omer. But I have no idea what that is. I've never even heard anyone talk about it before. For some reason, I think it's Irish?


P.S. Don't forget to post any requests for the Apple Lady to the entry below.

Sources
Judaism 101, The Counting of the Omer
OU.org, Lag BaOmer, The Mystery of Lag BaOmer, Celebration of Lag BaOmer, and Bows and Arrows
Chabad.org, Holidays, Lag BaOmer
Posted by the apple lady at 12:38 PM No comments: Links to this post


SORRY, I'VE STOPPED TAKING REQUESTS FOR NOW. I'LL PROBABLY DO THIS AGAIN IN THE FUTURE, THOUGH, SO DESPAIR NOT.

Yes, I've decided, once again, to ask you, my reader, for suggestions. What daily mystery intrigues you? Is there a word or phrase that, when you think about it, strikes you as particulary odd and you'd like to know where the heck it came from? Did you come across some reference to some historical event that you know you're supposed to know all about, but truthfully, you couldn't say for sure what happened, and you'd like to know more? Have you always wanted to know who invented your favorite food, game, or tool? Curious about the meaning of some pop song?

In short, if you've got a question, ask me. I'll look it up for you. I'll post the answers here.

Just one thing: I know for a fact that kids from elementary schools read postings on this blog now and then, and so do people from countries all around the world. So please keep your requests suitable for all readers.

Before I get into allergies, I have a small Betta fish update.

I was feeding my Betta the pellets that came with the bowl kit that I bought. But he was spitting out the pellet once or twice before he'd swallow it. I looked this up online and though many sites say different things, the upshot I think is that he was spitting out his food because he didn't really like it. Lots of websites say that pellets may be the cheapest and easiest thing to feed your Betta, but it's probably one of the foods they like the least.

Lots of Betta sites recommend feeding your fish live bloodworms or freeze-dried bloodworms. Despite the name, they are not actually worms, but the larvae of midge flies. I read that feeding live bloodworms can make it more likely that your fish gets parasites and diseases and crap like that, so I decided to give the freeze-dried variety a try. 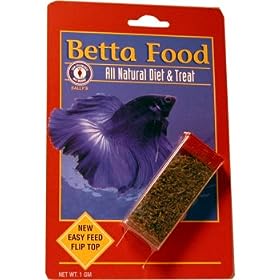 
The kind I got come in a little plastic box with a flip top, sort of like a Tic Tac box. I opened the box, gave it a little tap and about five or six of the dead, winged bugs dropped out into the water. And lo and behold, FishFish snuck up underneath one of them, then snapped it up like it was prey! He did this with each of the bugs and found them all in no time.

So I've kept feeding him the bloodworms, and it's pretty obvious he likes them better. He gets much more excited when they're in the water, and the rest of the day, he is way more active. When I was feeding him just pellets, he'd spend a lot of time at the bottom of his bowl, hanging out in his favorite hiding place. Now, every time I walk past his bowl, he's swimming around with his little fins going, and though he's always made bubbles every day, he makes even more bubbles each day. I plan to give him a few pellets now and then, just to keep some variety, but I'm sold on the bloodworms.

Now, on to the real posting. The reason I started out with the Betta fish thing is that lately, my skin has been itching like crazy. I read that some people are allergic to bloodworms, so I thought maybe that's what's been going on with me. But most people say their allergic reaction is respiratory in nature, rather than itchiness. Plus, I make sure to wash my hands right after handling the food, and I just don't think that's the cause.

So I was looking up allergy information in general and here are some of the things I learned:

My Girl still from HBO Sinapore

For some people, this sight instills great fear and the desire to flee
(Photo from Virginia Market News Service)

You'll be happy to hear that the advice that doctors give most often about allergies is that the best thing to do is avoid the thing that triggers the reaction. Well, duh.

A radio station I've been listening to lately plays commercials from the Shriners. You know, the guys who show up at parades wearing fezes and zipping around in little cars. I realized, I don't really know what they do. Something to do with raising money for children. It's kind of creepy that a bunch of old guys in funny hats drive little cars and ask for money for kids. But I'm sure, once I know more about their organization, I won't think they're as creepy.

Shriners in their mini-cars
(Photo from the Frymaster)

The Shriner crescent symbol
(Posted by JadenKale at shirt.woot!)

Here are some facts about Shriners:

Mel Blanc in his Shriners fez
(Photo from Kosair Shriners)


Sources
Shrine of North America, A Short History of the Shrine and Index
Gizeh Shriners of British Columbia, Famous Shriners
Ben Ali Shriners 2006, Want to be a Shriner?
Wikipedia, Shriners
Posted by the apple lady at 8:46 PM No comments: Links to this post