I have a certain song in my head right now. It arrives often. It's an old, old friend.

This one is a medley of several of the skits put together.


And this version highlights Number 7.


One of the things I remember for sure is how the blimp at the very end never makes it to the right edge of the frame. Every time I'd watch and hope, but of course, every time it would stop just short of the frame. Maybe in heaven, that will be one of the things that gets completed and I will sigh and say, "Ah, thank you."

Family Guy parodied the Pinball Number Count, briefly. I'm surprised to see that they seem to have used the original Pointer Sisters soundtrack.

If you want to own the Pinball Number Count to watch over and over, you can buy it on this collection of gems from the first five seasons of Sesame Street, which is from 1969-1974.


You can also learn how to make a clock that looks like the one at the beginning of the video, from Instructables.com.

What your own Pinball Number Count clock could look like
(Photo from Instructables.com)

Let me just get this out of the way: I watch the Game Show Network. Before I had cable, I hooted with disbelief that there was such a channel and that anyone would watch it. Now that I have cable, I watch. That's TV, I guess.

But there's a new game show on that channel, called Lingo. I like word games, and this is a pretty good one. And I have to admit, one of the reasons I like it is that it's hosted by Chuck Woolery. He does look like he's done a bit of hard living. But he still seems to be pretty relaxed up there and when he laughs, it doesn't seem fake. Or at least, most of the time it doesn't. Which is more than I can say for most game show hosts. And I liked that other word game show he did for a while, Scrabble. I liked the sound effects.

His thing is to say, before a commercial, "We'll be back in two and two," and he holds up two fingers, palm facing the camera, then flips his hand around and back again. It refers to the amount of time of one commercial break: two minutes for the commercials plus one second before and one second after.


So let's find out a little more about Chuck Woolery. But first, just to get us oriented a bit, I'll list the TV shows he's hosted.

Chuck, then, in his Wheel of Fortune days
(Photo from Gameshow Galaxy)

He's also appeared on a few episodes of Hollywood Squares.

If you've never seen it, this picture gives you an idea of the format of The Love Connection. It was like letting you be the fly on the wall in a video dating service. You got to watch people's video ads, then hear the couple talk about what their date was like. Sometimes it didn't go well at all, and sometimes, as in this episode, the couple hit it off.
(Photo sourced from Neil Kramer's blog, Citizen of the Month)


Other TV shows where he has appeared include:


Here's a sample of the show Scrabble. I picked this one because you get to hear a lot of the sound effects, and also the guy Rick is a bit of a nut. With his tarantula.

Now here are some facts about Chuck's life outside of TV:

BEFORE THE SHOWS YOU KNOW

Making use of his long-time love of fishing, Chuck has a DVD on bass fishing techniques.


I tried to find out what made him look so haggard, like maybe was he a big drinker or something once upon a time. I couldn't find anything that said either way. So maybe the four wives and eight kids and the quadruple bypass is what accounts for it.

Jo Ann is on the far right
(Photo from TV Magazine.com) 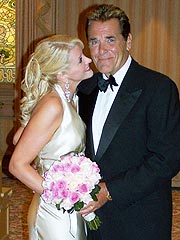 
I also found Chuck's MySpace page. On this page, he says he's only been married three times. Since his fourth marriage took place in 2006, he either hasn't updated his profile recently, or . . . something. He also talks a lot about how much he likes his Lingo co-host, Shandi.

Chuck and Shandi in a Lingo promo shot
(Photo from TV.com)


Here are some, er, highlights from his profile:

Combining strong looks with casual wit and unbounded charm, I have since become one of the most respected and liked game show hosts in the business.

[I'd like to meet] more future Lingo contestants so I can secretly ridicule their stupidity on the show.

In the shows I've seen, he's usually pretty complimentary of the players who whip through the puzzles in no time flat. But apparently when the camera isn't rolling, it's another story.

Supposedly, the Guinness Book of World Records says that the biggest Bobble-head doll is of Chuck Woolery. I leave you to draw your own conclusions.

See this You Tube clip.

Posted by the apple lady at 9:48 PM 5 comments: Links to this post

The other night, I was out with a few friends, and someone mentioned the city of Wilkes-Barre, Pennsylvania. I don't remember why it came up, I just know that it did. And then -- well, I'll give you the details in dialogue form because the pronunciation is important.

BRIGID: It's Wilkes-BARRIE, you dolt.

ALBERTINA: ha-ha, (dripping with sarcasm) Wilkes-Barrie. I don't think so. It's Wilkes-BAR.

BRIGID: No, it's not. It's Wilkes-BARRIE. I've known two people from there, one my cousin's friend who was born there and moved away, and another was a friend of my brother's who was also born and lived there until he was five, and they both pronounce it Wilkes-BARRIE.

BRIGID: Yes. Really. It's the same way people from Lancaster pronounce it LANG-kustir.

Wilkes-Barre is in the northeast corner of Pennsylvania, almost directly west from the pointy part on the NE edge of the state.
(Map from the Weekend Guide)


So I had to find out. Is it true what Brigid says? Because I have always thought of it as Wilkes-BAR. And why is the name hyphenated, anyway? Did it get married and choose hyphenation?

Other "mispronunciations" by residentsSome pronunciations people might think are incorrect, but they are said this way because that's how the British said them to begin with:However, the folks in Reading, Pennsylvania, pronounce their town REED-ing.

Here are some other towns with the same name that are pronounced differently depending on what state you're in:But, I should say in response to all of this, that in the case of proper nouns, the correct pronunciation is that which the owner of the name wants you to use. So if the town wants to be called Wilkes-Barrie, then so be it. And if Brett Favre wants to be called Brett Farv, that's correct too.


Oh, and I found out the origin of the name Wilkes-Barre (pronounced Wilkes-BARRIE). It's actually kind of interesting: a thumb to the nose of the British king.

Who knew that Wilkes-Barre, Pennsylvania was the site of such controversy? Yeah, I know. Wilkes-Barrians.

I was on the phone with a friend of mine the other day, and he mentioned yo-yos. I hadn't thought about yo-yos in years.

Pedro Flores, with one of his yo-yos that he manufactured in the United States
(Photo from Yo-Yos.Net) 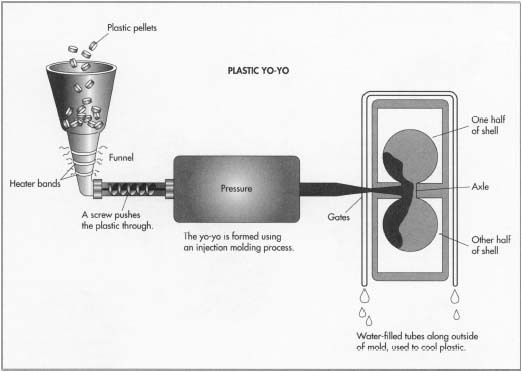 This is John, and he did some of his own experiments about how to increase a yo-yo's sleeping time.
(Photo from PBSKids)

Here is a video of one of Steve Brown's performances. It's pretty entertaining. And, when you realize that with the exception of when he clutches the yo-yo in his fist, the yo-yo is spinning the entire time, it's quite impressive.

[edit: I'm not sure what video I had originally posted here, but it went away. This may not be the same video, but it is Hiroyuki Suzuki, showing off his unreal yo-yo skills.]

I know, this one sounds gory and maybe fantastic. And for some readers, it might be too gory. But it comes from a genuine concern and a medical question.

About a month ago I think it is now, a friend of a friend suffered a fairly severe stroke. She was taken to the hospital and despite their efforts to stop or slow the stroke, the pressure in her brain continued to build. To keep anything else from rupturing and causing irreparable damage, the surgeons operated and removed a portion of her skull to relieve the swelling.

She survived the stroke, has regained consciousness, and is able to talk. She still has problems with motor coordination in her right arm, sometimes she can't identify what day it is, and once she was convinced she was in Panama. She will have to go through a pretty long and probably arduous course of physical therapy before she will be able to return home. But the removal of part of her skull seems to have prevented even worse damage and, perhaps, her death.

In asking people about how she is doing, I also burn with curiosity to know about this opening in her skull, and the bit that was removed. These are not the sort of questions you can ask people who are wound tight with worry over her survival and her basic abilities to function. But still, I want to know, does she still have a hole in her skull? Some equally concerned and curious friends have suggested that maybe her skull will mend itself, the way a broken leg can knit itself. I'm skeptical about this, but I really don't know the answer. Other friends said the doctors kept the piece of skull they removed and at some point will put it back in, and that piece will knit to the rest of her skull. But where do you keep a piece of skull? And how long do they wait before putting it back in?

Diagram of an ischemic stroke, showing the site of blockage up close and the damage to surrounding cells.
(Diagram from University of California, San Francisco Neurovascular Medical Group)

Diagram of a hemorrhagic stroke, showing the site of rupture up close and bleeding at the surrounding tissue.
(Diagram from University of California, San Francisco Neurovascular Medical Group)

Diagram of a surgical clip being placed at the neck of a ruptured blood vessel in the brain to stop the bleeding. (From the San Diego Neurosurgical Medical Clinic)
I knew it had to be more sophisticated than one of these:

Roy, of Siegfried & Roy, underwent this very surgery, following his near-fatal mauling by a white tiger. Surgeons removed about 1/4 of the right side of his skull to reduce pressure on his brain following lots of internal bleeding. They put the removed part of his skull into a pouch and inserted it into his abdomen. Nearly a year later, and after they had re-inserted the piece of bone into his skull, he had recovered enough to return home. He can now speak and write and walk with a cane.

Roy Horn in February 2005, a year and a half after the tiger attack and decompressive craniectomy.
(Photo from the Las Vegas Review-Journal)


By the way, this friend of mine is a long-time and deeply committed smoker. It is also a fact that smoking seriously increases your risk of getting strokes. Which means that quitting smoking will do a lot to help you avoid going through something like this yourself. The same could be said for not provoking any white tigers.