I have to be honest. It isn't just the insanity that has accompanied the new president that has thrown me off my Appling horse, it is also my job.  I have a (relatively) new boss, and he has changed a ton of things about our department, and my workload has tripled.  Where I used to be able to finish all my work ahead of schedule and under budget with great attention to detail, now I am scrambling just to complete all the tasks I'm responsible for.  Most days I leave work late, exhausted, and dissatisfied because I have to leave things incomplete.  I haven't had much time or energy left over for much else.

This past week was an especially grueling one.  I was working on one project that I knew would be complicated.  Most projects of this kind typically take me about 5 hours.  I expected this one to take me a day, maybe day & a half.  It took a week and a half total, the final 3 days of which I spent solely and completely on it with my entire attention for a solid 8 hours, or 9 hours, or 10 hours.

At the end of one of these days, I was staggering out of my building and the sun was going down, but I was pleased because most of the time when I leave work it is dark.  I had that weird floating feeling you get when you've had insufficient sleep for a long time, and as I walked to my car, I was staring at the clouds edged with the peach of sunset and the vivid green of the grass and the potholes in the asphalt as if I had never seen any of them before.

The clouds on that evening looked something like this, though they were smaller than this. As we learned in my Sunsets entry, no two sunsets are alike, from one location to the next, from one day to the next.
(Photo of sunset over Sydney, Australia, from Wikimedia Commons)


When I got to my parking lot, I heard a bird singing.  There is a strip of grass in between two great expanses of asphalt and along this strip of grass is a row of pine trees trying valiantly to keep growing in spite of being surrounded by almost nothing.  I don't know what kind of trees these are, actually.  They look a lot like conifers, but they lose their needles in the fall and the whole concept of deciduous conifers just confuses me.  Because their needles turn brown and fall off, they look sickly most of the time.  Maybe they really are.

But it seems as though they are trying to make some sort of comeback with the spring. They are sprouting some new needles that are that very bright yellow-green of new leaves and they look soft and not stiff & pointy yet.  They are still sparse, though, so you can see the entire shape of the tree like a skeleton. 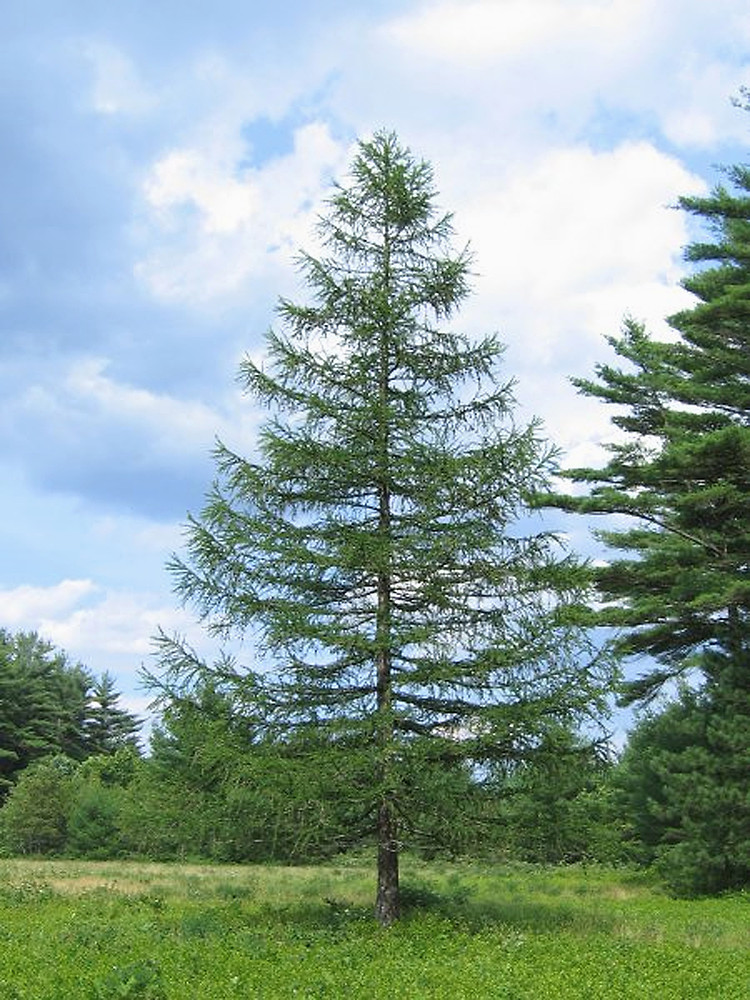 Maybe the trees in question are European larches -- one of a very few deciduous conifers.
(Photo from Go Botany)


At the very top of one of these trees sat a bird and it was singing and singing and singing.  I couldn't tell what sort of bird it was because the light was behind it so it looked like a dark shape up there.  But its song was complex, liquid, carrying, and beautiful.  It sang a series of songs, like maybe 4 patterns, then paused.  Then it sang another series of 4, but slightly different than the first 4, variations almost, then paused again.  It did this over and over, but each series I heard was different.  No pattern was exactly the same , though some of the sounds were repeated, like the way the letter "y" sounds one way when attached at the end of a word but another way when you put it at the front of a word.

To my exhausted, drained ear, it sounded beautiful and delicious.  It felt physically good to listen to it.  I wondered if I could make it my job to listen to birds' songs all day, recording their patterns.  Probably this is someone's job already, to listen to birdsongs.

I also wondered, how do birds do that?  They are such little things, how do they make a song so complex, that sounds like water bending around a curve?  Tell me more about how birds sing. 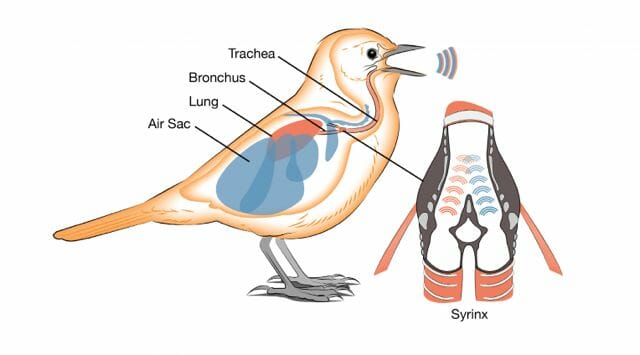 A more zoomed-in view of the syrinx, showing the trachial and bronchial rings which line the trachea and bronchial tubes respectively, and which help create various sounds. The two red blobs on either side of the two tubes, labeled the lateral labia, are bumps of muscle, I think, which constrict the tubes or open them, and that also creates variation in sound. They can regulate volume as well as pitch.
(Diagram from Biology 342 course materials at Reed College, adapted from another source whose page is now defunct)

The Cornell Lab of Ornithology has this wonderful interactive page showing how the syrinx works and what it is doing during the songs of particular birds.  You must investigate this. Watching the interactive pages will give you a much better idea of how the whole mechanism works than any description of mine could.

But let me quote from this rather poetic passage from the British Library which explains how birds sing, and also, well, see for yourself:

As air passes, so an acoustic disturbance is set up, the tympanum vibrates and sound is created. The pitch (frequency) of that sound and the loudness (amplitude) of it can be modulated. So far as the tympanum is concerned, these two effects are usually coupled. The function of the extendable little "bump" is believed to be to change the loudness without having to change the pitch. Bear in mind that the bird may be playing at the same time a second tune on his other half; also that this description is considerably simplified. It will be clear, however that such complexity is necessary to explain the amazing vocal gymnastics certain "higher" songbirds display. "Lower" birds have a syrinx that is of a rather simpler design. In either case the physiology and acoustics of bird vocalisation are unique in the animal kingdom; further, birds produce more complex sounds than any other animal, certainly including man.

One last point: birds do not sing only when inhaling. A grasshopper warbler Locustella naevia may "reel" for over two minutes, a nightjar may chur continuously for eight minutes, and a skylark may "pour forth its full heart" in completely unbroken song for 18 minutes. To replenish their oxygen these birds must breathe in; and must do so while singing. In the case of the night jar, the bird discernibly alternates soft short trills with loud long ones and these short trills are believed to be when the bird inhales. Less continuous singers may also use air travelling in either direction. The white-rumped shama, for example, is believed so to do. (British Library)

A remark in that British Library passage reminds me that I'm also curious about owls.  On other occasions, in a forest where I like to hike, I have heard barred owls hooting.  But that word "hooting" sounds really tame compared to the sounds I've heard.  The barred owl's call is typically rendered as Who cooks for you? But what I have heard was really frickin' carrying and echoing and loud.  Like you could hear this call from two miles away.  And usually it's more like Who cooks for yooooooooooou?

I have tried to duplicate this call, and every now and then other people walking in the woods have tried to call back to an actual owl. But it doesn't even come close to how full-throated the owl's call is.  Ours sounds like a weak imitation while theirs sounds like it comes from inside a barrel and gets broadcast through a megaphone.

In that British Library passage, I wonder if owls are one of the "lower" birds whose syrinx is less complex than the songbirds'.  Because for all the volume and timbre of the owl's call it is not as complex as a songbird's song.  The barn owl cannot even hoot or call as other owls do; it makes more of a rasping noise.

I couldn't find much information about owl syringes (plural of syrinx; gotta love Latin). Apparently they are not as interesting as the voice boxes of other birds.  But I did find some videos of owl calls.

Here's a video with recordings of barred owl calls.  I don't think you get the sense of volume, but imagine that this recording was made about a mile or two away from where the owl is roosting.

Just as no two sunsets are alike, possibly no two birds' songs are alike.  Though birds can sing way better than people can, they are like people in that each bird's voice is unique.

So I may never again hear a bird's song like what I heard the other day.  But I may hear another song some other day that is even more wonderful.


Maybe what I heard was actually a robin. Everybody thinks they're so common, and they are, but I do love them. They remind me of long, good summer days when I was young and spent most of the day playing outside and the sun has gone down and I'm lying in bed, tired in a good way, being lulled to sleep by the soft breeze from the fan, while outside, the robins are singing their good-night songs. No better lullaby.


Sources
Cornell Lab of Ornithology, Indigo Bunting
Audubon, Indigo Bunting
The Guardian, Mystery bird: Indigo bunting, Passerina cyanea
British Library, The language of birds 6. How does a bird sing?
Wingmasters, Who Gives a Hoot -- and Who Doesn't
Frank B. Gill, Ornithology p 223
Posted by the apple lady at 11:08 PM 9 comments: