I've been reading a hefty amount of Victorian era novels lately: A Tale of Two Cities -- which is unbelievably violent, and I say unbelievably because I don't remember such bloody horrors from when I read it in high school -- Vanity Fair, and a somewhat obscure novel by Anthony Trollope.

In reading these novels, I encountered people drinking bumpers of punch, or pouring out another bumper of some kind of alcoholic drink. This was made to sound like a lot of hooch, and that word "bumper" made me think of the felt-covered bumpers that are on billiard tables. I wondered, are people drinking that much liquor, and out of things that look like pool table bumpers?

Surface tension makes the water bulge above the rim of the glass, and is also strong enough to support this paper clip without making the water spill over
(Photo from the DHD Multimedia Gallery)


A NOTE TO REGULAR READERS

Apple #200 is approaching...
Do you know what your favorites are?
More coming soon.

A friend of mine recently went to Canada and during this trip, he bought some whiskey in a duty-free store. It was very cheap, compared to what it usually costs. In discussing this little venture, my friend and I realized we didn't really understand how duty-free stores work.

We knew it had something to do with not having to pay taxes on the goods in the store, but beyond that, we had many questions. For example, could you go to your nearest local international airport, find the duty-free store, buy a bunch of stuff, and go back home?

Clearly, this was a question for the Apple Lady.

Now that you're a savvy duty-free shopper, you should also know that it matters in which country's duty-free store you're going to exercise your savvy purchasing power.

Australia's rules about how much they can bring home are a little different.
(from the Melbourne Airport)

Sources
Howstuffworks.com, "How Customs Works," and "How the U.S. Customs Service Works"
For more specifics on personal exemptions and restricted items, see Howstuffworks, "What Does Duty-Free Mean?"
Jack Adler, "Duty Free Shopping," TravelASSIST Magazine
Betsy Wade, "What's So Free About Duty-Free?" The New York Times, August 16, 1998
Ask Yahoo, "What's the deal with duty-free shopping?"
Posted by the apple lady at 1:40 AM No comments: Links to this post

When I was in Florida, my friends and I found ourselves discussing a burning question: can salamanders really survive amid fire? We had heard people describe salamanders as walking around in fire. I once upon a time got hooked on a computer game called Dungeon Keeper, and some of the creatures in it included salamanders, and they were the only creatures who could walk through fiery lava. So do actual salamanders live on the sides of volcanoes or something? Where does this salamanders-enjoy-fire idea come from, and is it accurate? This is a Tiger Salamander from Illinois
(Photo from MichaelCravens.com)

They don't live in especially hot climates. They need to stay moist and be near water to survive. So where does this salamanders-live-in-fire business come from? 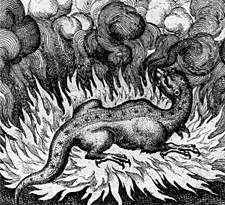 This picture of a salamander in fire was drawn in 1617.
(Image from Strange Science)

This salamander from a game of the same name looks more like a snake or a dragon, but it's a salamander and apparently there was lots of fire involved.
(Image from Insomnia)


Other notable appearances of salamanders:

Guy Montag at work on the salamander, in the movie version of Fahrenheit 451.
(Photo from Squidoo)

Another thing I did on my vacation (I know, it's been a while, but things have been crazy around here) was tool around in a kayak. It wasn't one of those white-water things, just some placid paddling action. I had been in a kayak once before, also on vacation, when I went to Vieques once. That was a great experience -- both the trip to Vieques as a whole, and also the part where I was in a kayak. So I was looking forward to the chance to get in a kayak again, and I was not disappointed. Even though it started raining halfway out. Even though my watch fell in the drink. I saw lots of shore birds, may or may not have seen an alligator, and just generally enjoyed zipping around in the kayak.

This photo of an Inuit kayaker with his harpoon was taken around 1913 or 1914.
(Photo by Robert Flaherty, from the Royal Museum of Ontario)

This current Alaskan kayak doesn't look all that much different from the 1913 model.
(Photo from Homer Ocean Charters)

(From the Four Elements of the Eskimo Roll)

Here's something else I saw while I was in Florida. I was by myself in the house for a while, lunchtime I think it was, and I was flipping through the channels on TV and I came across an old Rockford Files episode. I hadn't seen one of those in a while, so I thought I'd watch that.

From the intro sequence
(Photo from SuperSonic Soul)


It was still very early in the episode, and they were showing the credits. I saw "Written by David Chase." I thought, could that be the same David Chase who is the head writer and brains behind The Sopranos?

Tony, telling them how it is
(Photo from Australia's The Age)


Before I answer, a little background.

In case you're not familiar, The Rockford Files was a detective show that first aired in 1974, starring Jim Garner as Jim Rockford, a no-fuss private detective who wasn't afraid to pretend he was somebody smarmy to get an address, and who would do his best in a fistfight if he couldn't avoid one. He lived in a trailer next to the ocean and drove a gold-toned Firebird. I used to watch this show a lot with my dad.

The Sopranos, on the other hand, is a super-intense mafia drama on HBO. The lead character is Tony Soprano, de facto head of a New Jersey mob family. You see Tony exacting his mafia brand of violence on all sorts of people, and members of his mob family doing the same. The impetus for the show is that Tony is having panic attacks and goes to see a therapist. So you also see him in therapy sessions, trying to figure out his life. In addition, you also see a group of federal agents working to collect enough information to arrest Tony.

Now, here's what happened in The Rockford Files episode I saw:

Do you see the connections? Therapy sessions, federal agents trailing people, the mob.

So it should come as no surprise that, yes, David Chase of the now-Sopranos fame did write that episode. It's called "The Dog and Pony Show," in case you're interested.

And in fact, David Chase wrote several episodes of The Rockford Files. He even won an Edgar Allen Poe award for one of them, called "The Oracle Wore a Cashmere Suit." That one doesn't have a whole lot to do with mobsters, but another episode of Chase's does -- "Just a Coupla Guys" is about New Jersey mobsters -- as does "Punishment and Crime," which includes Russian mobsters and a torture scene.

The point of all this is that maybe one of the reasons that The Sopranos is so good is that Chase had the chance to work on his plot a few times before he turned it into a full-blown, multi-season TV show.