On Saturday, former CIA operative Robert Baer told CNN that the information he's seen so far about Russian hacking suggests they did interfere in the US Presidential election with the express goal of helping one candidate (Trump) and hindering another (Clinton). He said, "When a foreign country interferes in your election and the outcome is in doubt, . . . I'm not a constitutional lawyer, but . . . I would like to see the evidence, because if the evidence is there, I don't see any other way than to vote again."


So, is this possible?  Could the election not really be over?  Could we be going through the whole thing all over again?

General Pinochet and Henry Kissinger shaking hands after the coup & killing of Chile's president. Pinochet's bloodthirsty head of secret intelligence, Manuel Contreras, was a former member of the CIA.
(Image sourced from Steemit) Screenshot of Fancy Bear website, boasting about having hacked the Olympics' anti-doping agency. No, the Russian government would have no interest whatsoever in the anti-doping agency being undermined.
(Image sourced from VOA) It took Haiti more than a year to re-do the election that was declared to be fraudulent.
(AP Photo by Ricardo Arduengo, from Indian Express)

With all the news about Trump's picks for this or that cabinet position, and particularly about the response to his choice of white supremacist Steve Bannon as his official strategist, I realized I had no idea how this cabinet appointment process works. Lots of people are sending their opinions about Bannon to members of Congress and to Trump himself, but I've been thinking, if these are appointments, what's Congress got to do with it?  Can't Trump just do whatever the heck he wants?  Another politician might listen to people sending reams of letters and postcards to his mailbox, but I doubt Trump would.

So, first, how does the Cabinet appointment process work, and second, if you seriously object to a particular appointee, what can you realistically and effectively do about it?

The Few Basic Rules of Appointments 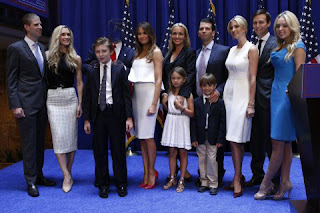 Slightly edited photo of the Trump children & their spouses, and Melania.
I think Barron would probably not be confirmed as a Cabinet appointee.
(original at Business Insider)

Most Executive Branch Appointments Are President-Appointed Only

Many Cabinet Positions are President-Appointed, Senate-Approved

This is what Federal Reserve Chair Janet Yellen's confirmation hearing looked like.
(Photo by Pete Marovich at Bloomberg)

It All Takes a Long Time

For example, nearly every office shown here in the Dept of Justice is a Presidential-Appoint, Senate-Approve position. But there are boatloads more that aren't shown here that also require Presidential appointment/Senate approval, including but not limited to the US Attorneys for each state, and many states have more than one. The US Atty for Northern Illinois, Obama's home region, is vacant as of 2012.
(Diagram from Wikipedia)


So, even knowing more about how this whole process work, I don't have many specific recommendations for actions to take that can have real effects. I guess my general suggestion is, be vocal but also be local. Here are some resources:


Sources
Georgetown Law Library, Executive Nomination Process Guide
[The Plum Book, or] United States Government Policy and Supporting Positions, 12-1-2012
The Washington Post, There are three [unwritten] rules of Cabinet appointments. Will Donald Trump break them? 11-25-2016
The Washington Post, President Trump’s Cabinet picks are likely to be easily confirmed. That’s because of Senate Democrats. 11-18-2016
A Survivor's Guide to Presidential Nominees, 2013 edition
The Political Appointee Project
The Aspen Institute, The Federal Appointments Process: The Problem and Our Proposed Solutions
Quora, Which laws been enacted to prevent family members of a president from serving in his cabinet?
Huffington Report, No, Donald Trump Can’t Appoint His Kids To His Cabinet [actually, he can], 11-10-2016
Business Insider, Report: Trump was unfamiliar with the scope of the president's job when meeting Obama, 11-13-2016
The New York Times, Firings and Discord Put Trump Transition Team in a State of Disarray, 11-15-2016
Posted by the apple lady at 6:13 PM 2 comments: Links to this post