Well, this one is the granddaddy, isn't it?  In case you haven't noticed, I've been avoiding this one.  It's hard to talk about, and even harder to find something positive to say about what happened without sounding like some brainless twit of a Pollyanna.

It's also taking me a long time.  Whenever I've sat down to try to put this together, told myself, Finish this post and then you can move on, I found I couldn't do very much for very long.  It's one thing to read a whole lot of stuff about what happened in NY on 9/11, but it's another thing entirely to think about it in some coherent way, form meaningful words, and write them down.  What you'll read here in this one post has taken me weeks to get down. 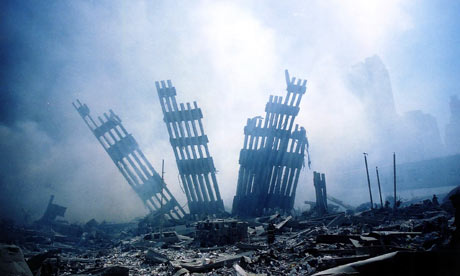 Ground Zero, after the attacks.
(Photo by Alex Fuchs/AFP, from The Guardian)


My goal is to tell you some of the facts I learned.  Because they were news to me -- though maybe they won't be to you.  Some of the facts are pretty gruesome, and up until now, I've shied away from talking about such things.  But that was one of the questions I had, when I was re-visiting the events of that day.  Thousands of people were killed.  We saw all kinds of evidence all over the place of the buildings that were completely destroyed, but we didn't see very much evidence of the people who must have been injured, their bodies wrecked.

I am not a gore-seeker.  There are people out there who are.  I really do not want to cater to those interests if I can help it.  My reason for wanting to know some of the gory physical facts is because, after all the time that has passed, I wanted some irrefutable thing that would tell me, this happened to people.  Not just the horrible, choking, toxic dust (I will give you a few facts about that), not just the surreal and incredible sight of those planes crashing straight into the towers, but what happened to people.  I want survivors and family members to know that the few facts I have to share about that, I say with the utmost respect.  I want to talk about this because I think it is important that we who weren't as directly touched by the events can face the consequences of these acts.  The terrorists hurt people.  A lot of them.  This wasn't just one ideology clashing with another.  This was people doing violence to other people.  I think it is important to talk about that.

I learned some other facts that are a little less upsetting, or maybe I should say a little less bloody.  I want to share those with you too.  I make no promises that the sequence with which I present the odd bits that I learned will make any sort of sense.  I mean, the whole thing doesn't really make any sense, so why should my presentation of a few of the facts within it have any kind of cohesiveness?

Effects of the Initial Fireball Explosions The fireball that erupted from the South Tower upon impact.  But the scale of it gives you an idea of the size of the similar fireball that blew exploded down the elevator shaft in the North Tower.
(Photo from the Daily Mail)

"A man, already dead, was pushed against a wall, his clothes gone, his eyeglasses blackened, his tongue lying on the floor next to him. The other was a woman, with no clothes, her hair burned off, her eyes sealed.

“'The woman, she sat up. I’m yelling to her, ‘Don’t worry, we’re going to help you,’” John M said. “She sat up and was trying to talk, but her throat had closed up. She died right there.'” (From the Appleton Post Crescent, via the FDNY Ten House)

"The Falling Man," photo taken by Richard Drew of a man whose identity is still uncertain, falling from the North Tower before it collapsed.
(Photo from Wikipedia)

"Jumping indicates a choice, and these people did not have that choice. That is why the deaths were ruled homicide, because the actions of other people caused them to die. The force of the explosion and the fire behind them forced them out of the windows."
(spokesperson for NY medical examiner, quoted in the Daily Mail)

"'It made me feel she didn’t suffer and that she chose death on her terms rather than letting them burn her up.'

"He has no time for suggestions that she took the easy way out. 'The people who died that day weren’t soldiers. They were everyday people — parents and housewives and brothers and sisters and children.'"
(Husband of a woman who died in the attacks, quoted in the Daily Mail) 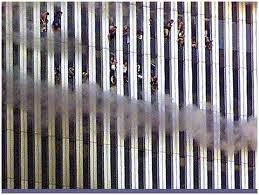 People clinging to the outer edges of the World Trade Center as it burned. This is a choice no one would ever want to have to make.
(Photo from Moon & Neptune in Twelfth House)

"As the towers collapsed, tons of building debris fell onto the firehouse and forced its way into it, blowing out windows and doors and causing extensive damage to the facade, interior structures, utilities, lighting and the roof. Inside the firehouse, the apparatus floor was flooded with over three feet of debris and in some areas in and around the firehouse the debris from the collapse was nearly six feet deep. The building’s ventilation system, air conditioning units and Nederman exhaust system were completely destroyed."  (NY Mayor Bloomberg Press Release, from FDNY 10 House) 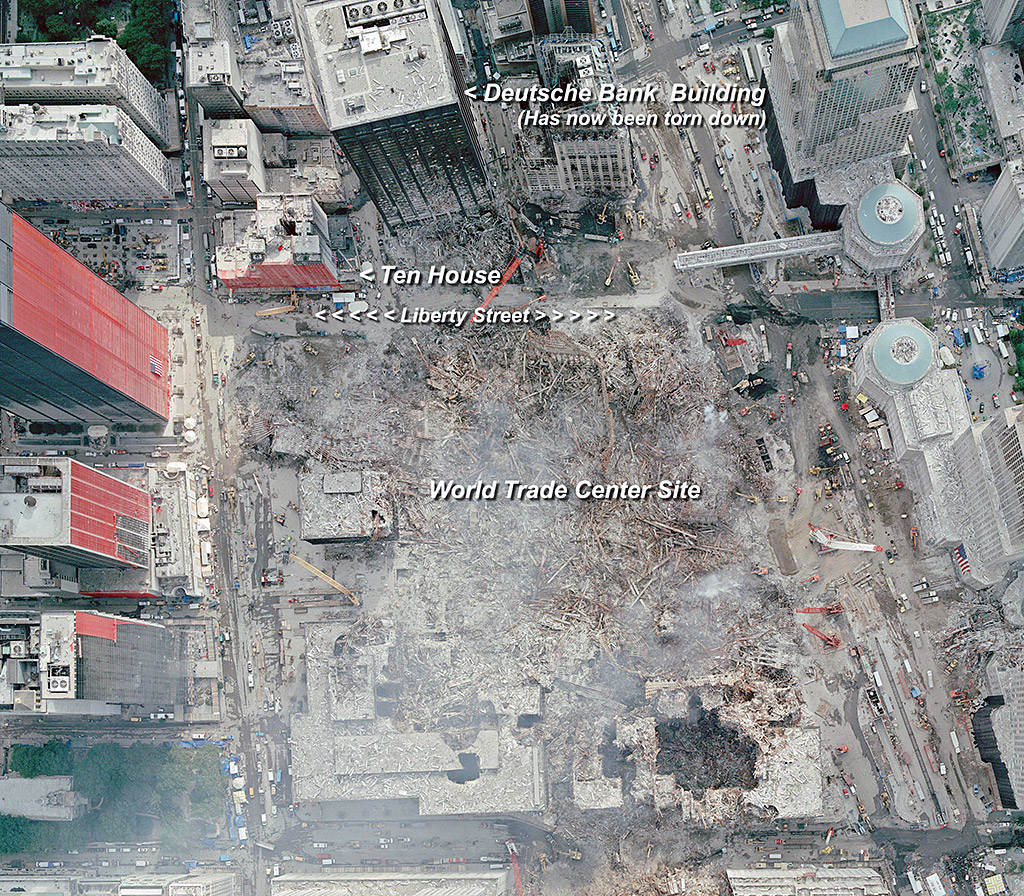 Ten House's location across the street from the WTC site.
(Photo by NOAA, from FDNY 10 House) 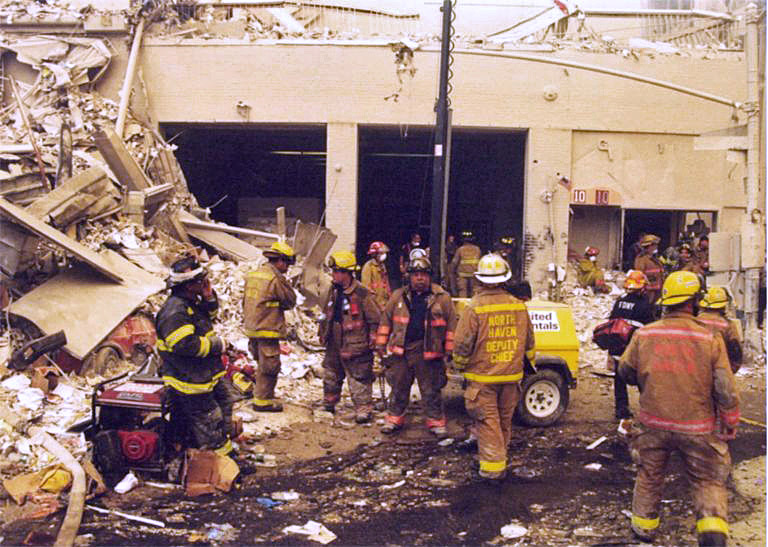 Outside the front door of 10 House after the buildings collapsed. Firefighters who had been rescuing people from the burning buildings and getting themselves and others out after the collapse came back to their engine house -- their home base -- and found this.
(Photo from FDNY 10 House) 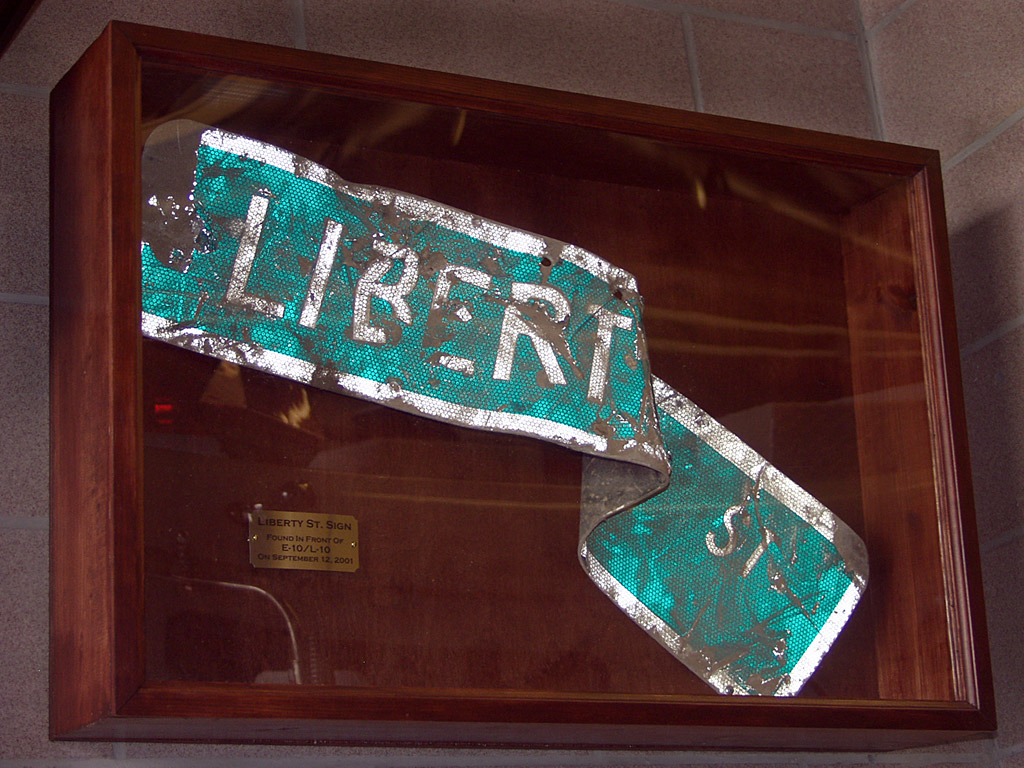 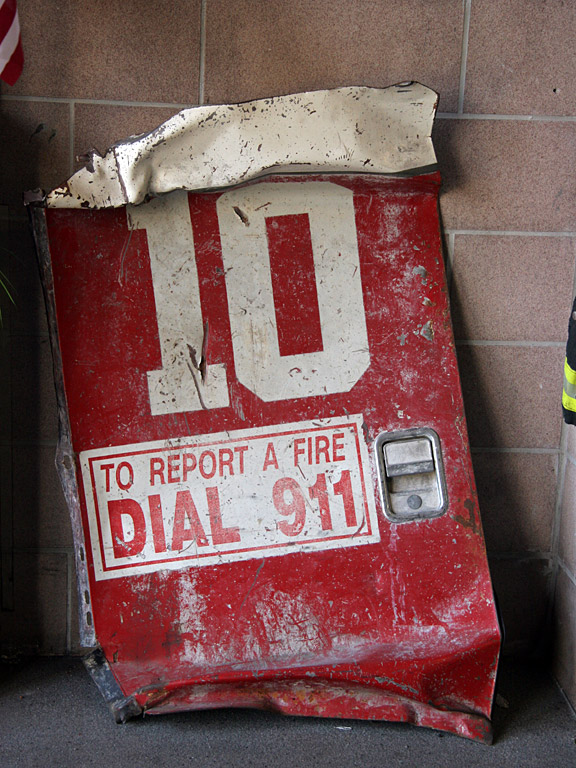 The door from their fire engine, damaged due to the force of the buildings' collapse.
(Photo from FDNY 10 House)

"The second collapse was much worse because the dust that was on the ground already started up a cloud that was much bigger than the first one. That's a detail most of the people who weren't there don't realize: the collapse of the second building started much more dust and debris than the first collapse."  (Firefighter Larry Monachelli, from a different engine house)

“This stuff came through and it was hot. It had a hissing noise to it, with a big gust of wind. It was like wiping crushed glass on your skin. It was like an avalanche coming at me through a valley." (Firefighter Pete D'Ancona, 10 House)

[After the collapses] “Everybody was gray, covered in soot. You couldn’t tell what color or nationality anyone was. They were all gray.” (Firefighter Pete D'Ancona, 10 House)

The dust cloud billowing out after the collapse of the North Tower, from several blocks away.
(Photo by NY photographer Tobias Everke)

Survivors covered in the toxic dust created by the collapse of the two towers. They sure look like they want to be "entitled," don't they?
(Photo by Gulnara Samoilova from the AP, at Pop Photo)

One World Trade Center
(Photo from the NY Observer) Bretagne, one of the dogs who searched Ground Zero for survivors, returned to the Memorial in September 2014.
(Photo via the Huffington Post) Genelle Guzman-McMillan (in the blue dress) was one of the people the search & rescue dogs found in the rubble -- in fact, the last person to be pulled alive from the wreckage.  Here she is with her husband and her three daughters outside their home in 2011.
(Photo by Dan Callister, from Today)

Sources
If you want to read more extensively about what that day was like, these are some especially good sources:
Ed Culhane, Appleton Post Crescent, Amazing Grace: Fire Truck from Clintonville embraced by FDNY Ladder 10, 2002
Undicisettembre, World Trade Center: an interview with firefighter Larry Monachelli
Pop Photo.com, 9/11: The Photographers' Stories, Part 1 (there are 4 parts)
The History Channel's documentary 102 Minutes  That Changed America, showing footage taken by various videographers at various locations around the Towers, is a powerful thing to watch.  They don't have the entire video online, but their website gives you a good introductory feel for the documentary.