Continuing the discussion of my many travels this spring, at one point in my travels, I rode in a gondola.  No, I was not in Venice.  This was one of those gondolas that is an enclosed little box that hangs suspended from a cable and carries you up the side of a mountain.  No, I was not skiing, I was riding up over a hillside covered with redwood trees.  Pretty spectacular stuff. 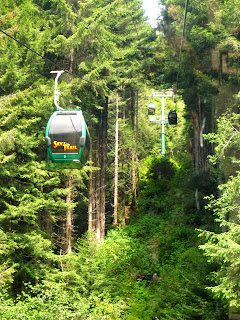 The gondolas of the SkyTrail. As you ride in your gondola, you're suspended hundreds of feet above the ground as you're being carried up the hillside through the trees until you're at the top of the hill and the top of most of the redwoods.
(Photo by the Apple Lady, a.k.a me)


But the fact that I have to explain what kind of gondola it was leads me to think about gondolas.  How many kinds are there?  Why are so many different things called a gondola?

Maybe a better shot of the SkyTrail gondola and its high altitude situation.
(Photo from the Trees of Mystery)

The Venetian gondola -- the first kind of gondola.
(Photo from Local Venice Tours)

Gondola on the Charles River in Boston. Note the Venice-wannabe-suit the guy is wearing, but with Boston in the background.
(Photo from Gondola di Venezia a.k.a. bostongondolas.com) 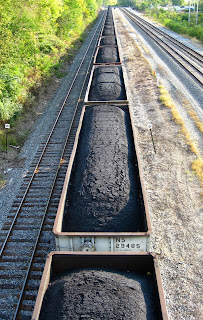 This train is nothing but gondolas full of coal.
(Photo by the Apple Lady. That's me.)

In this photo of the Goodyear blimp over Miami Beach, the gondola on its underside is clearly visible.
(Photo by Chris Hansen, sourced from the State Archives of Florida)

Whooee, that gondola is way up high in the air.  This is at Crystal Mountain in Washington.
This photo is copyrighted by Jeff Caven, and normally I would not post a copyrighted photo. But this is just too good not to show it to you, and I hope he will be kind and realize that this blog's purpose is educational only, and allow you to see it so you can admire his work.
(Photo by Jeff Caven at VisitRainier)

Led Zeppelin. Oh, the word play and the actual rock & roll. My Apple Lady heart is about to burst.
(Photo from Glow Magazine)


P.S. This is the message that the SkyTrail in all seriousness gives you at the end of the ride: 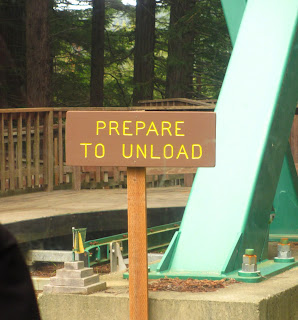 (Photo by the Apple Lady. That's me.)

Posted by the apple lady at 1:45 AM No comments: Links to this post

I'm still getting caught up from all my travels last month.  When I was visiting out Northern California way, I drove through the famed Avenue of the Giants. You'll be hearing more about this in the future, I promise.  But for now, briefly, this is a two-lane scenic highway that winds between enormously tall and very old redwood trees.  Jaw-droppers these things are.


The road has all kinds of shoulder spots and turn-off areas where you can park and get out and let your jaw hang open while you stare around.  There are also little trails that you can walk in among the trees.  At the first place I stopped, I happened to see this: 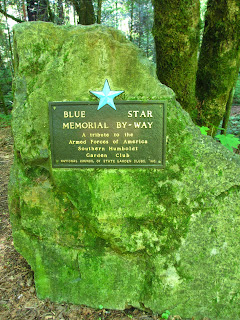 
This is in California, right?  Well, there's a place I've been going to in Michigan for years, ever since I was a little applet, where there is a Blue Star Highway.  Any time we would give people directions, we would say, "Get off the expressway and take a right on Blue Star."  Which is to say, this was the only Blue Star Highway I'd ever known, and I thought it was the only one.  But lo and behold, there's another Blue Star highway (OK, this is a by-way) in California.

What gives?  Are there lots of Blue Star highways?

This is "Sergeant Adam" taking down the Blue Star service banner that was hanging in the window at home while he was serving in Iraq.  Now that he's home, he gets to take it down.  (This flag indicates that the people who live here have a family member in military service.)
(Photo from Chief Bob Lusk)

A Blue Star Memorial Highway sign from Illinois.  This one is in need of attention, as the star has faded and the sign's color has changed over time. But you can see that it states its purpose, that it was dedicated by the Garden Club of Illinois, and it's located in Jacksonville, Illinois.
(Photo from the National Remember Our Troops Campaign)

The By-Way sign (left) is a plaque that goes on a thing, like a big boulder.  The Highway sign (right) goes on a 7'-tall post next to a highway.
(Photo from the National Garden Clubs)

This Blue Star Memorial Highway marker is blue.  It is located on US 77 in Oklahoma.
(Photo from the National Remember Our Troops Campaign)

Here's another example of a by-way marker.
(Photo from the National Remember Our Troops Campaign)

From a dedication ceremony in By City, Texas, 1985. Vandals broke the marker off its post in 2011. At last notice, local groups were working on repairing it.
(Photo from The Daily Tribune, sourced from TXGenWeb site for Matagorda County) 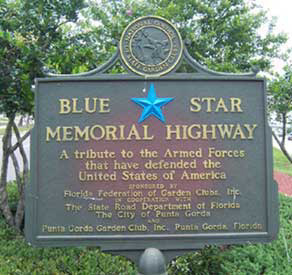 Here's a marker from Punta Gorda, Florida. (This one's for you, Jarred. Because it's in Florida.)
(Photo from RV-A-Gogo)


Well, I guess I should have done this entry around Memorial Day.  But I didn't know then all I know now. I'll just have to keep my eyes open in the future for other places where I might see the Blue Star signs. Because apparently they're all over the place.