So unless you've been keeping your TV and your internet turned off for a few weeks, you have by now heard that Bill Cosby got quaaludes in the 1970s for the purpose of giving them to women he wanted to have sex with.  He made this admission in a court case in 2005, but in the light of multiple accusations that have been made by multiple women that he drugged them to insensibility and raped them, this admission seems very damning.

Then last night I read a disturbing account in The Huffington Post of the rape and humiliation of Jackie Fuchs (a.k.a. Jackie Fox) by the band's creepazoid manager in front of a room full of people, when she was in the Runaways with Joan Jett in 1975.  She was given somewhere in the neighborhood of 7 quaaludes which made her immobile, but though she was drugged, she was aware of what was being done to her.  She was 16 years old at the time.

The Runaways, L to R: Lita Ford, Joan Jett, Jackie Fuchs, Sandy West, Cherie Currie.  They were all somewhere around 15 to 17 years old.
(Photo from Consequence of Sound)


So, what's the deal with quaaludes? Prescription bottle for Quaaludes, manufactured by Rorer in the 1970s. Quaaludes are now illegal in this country because they are extremely addictive and dangerous.
(Image from The Paris Review) Billboard in Venice, CA, 1976. I think maybe that was originally an ad for Bacardi and Coke, but somebody changed it.
(Photograph by Anthony Friedkin)

She fumbles and stumbles
And falls down the stairs,
Makes love to the leg of the dining room chair.
She's ready for animals, women, or men.

A band called Naked Grape also has a Quaalude song. Theirs is called Rorer, Or Rorer


Rorer, oh Rorer, where did you go?
You left without warning, how could I know
That many years later, I'd sit back and dream,
of doing the nasty, on seven fourteens

Rorer, oh Rorer, you were Rock 'n' Roll,
I woke up with strangers I did not know
Had you stayed longer, my death I would see,
but you went first Rorer, so for now, R.I.P.

Jackie tried to protest, but she was frozen. “You don’t know what terror is until you realize something bad is about to happen to you and you can’t move a muscle,” she says. “I can’t move. I can’t speak. All I can do is look him [the roadie] in the eye and do the best I can do to communicate: Please say no. ... I don’t know what it looked like from the outside. But I know what was going on inside and it was horror.” [Jason Cherkis, The Lost Girls, The Huffington Post] Jackie Fuchs (or Jackie Fox as she was called then), 1976
(Photo by Neal Preston, sourced from Rock n Roll Icons) 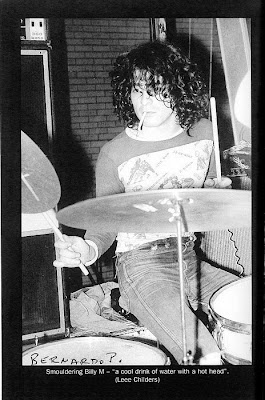 Billy Murcia, drummer for the glam band New York Dolls, died of an accidental Quaalude overdose in 1972, at age 21, after only a year of being in the band.
(Photo from The Shit)

One of the incarnations of Mandrax sold in South Africa today. It is usually crushed, mixed with dagga (marijuana) and then smoked in a broken neck of a bottle.  It's extremely addictive, and people who are hooked on it often steal to support the habit.
(Photo from Drug Aware South Africa)