Thinking some more about my upcoming trip home for Memorial Day weekend, I remembered that my parents recently got a bocce set. We played a lot the last time I was there, and I think maybe we'll probably play again. Although, it might be raining, so maybe not. In any case, I suspected there might be some interesting tidbits to know about bocce. 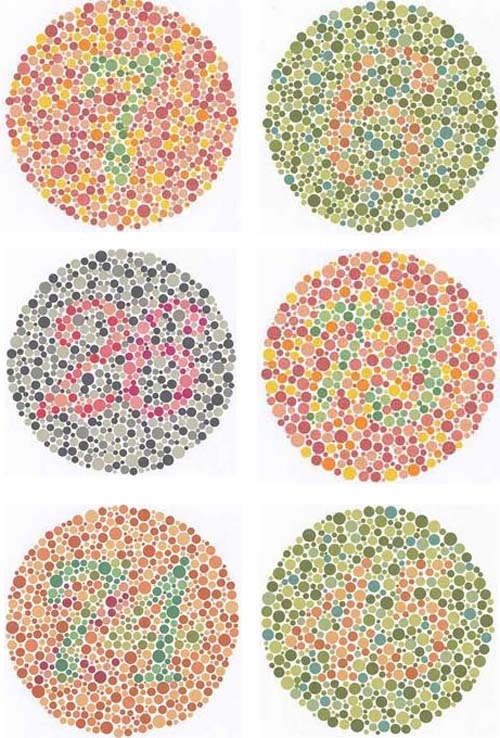 Some typical tests for color blindness. If you have trouble seeing the numbers in these circles, you may be color blind. I'm not color blind, but the ones at the bottom are a little trickier than others, I must admit.
(Images by Vurdlak from Mighty Optical Illusions)

This just in, as of September 2009: scientists have recently found a way to correct color blindness in monkeys. The researchers used a non-harmful virus to carry a gene that replaces the missing gene responsible for causing color blindness. The virus replicates and inserts the gene into the cells, and in about five months, the monkeys could see color. The researchers are hopeful that this treatment or one very like it could be used to correct color blindness or perhaps other visual defects in humans.

I'm going to see my parents for Memorial Day weekend, and it is very likely that we will play cards during my visit. Which got me thinking about cards, and wondering where they came from.
How the Jack of Diamonds has changed over time: 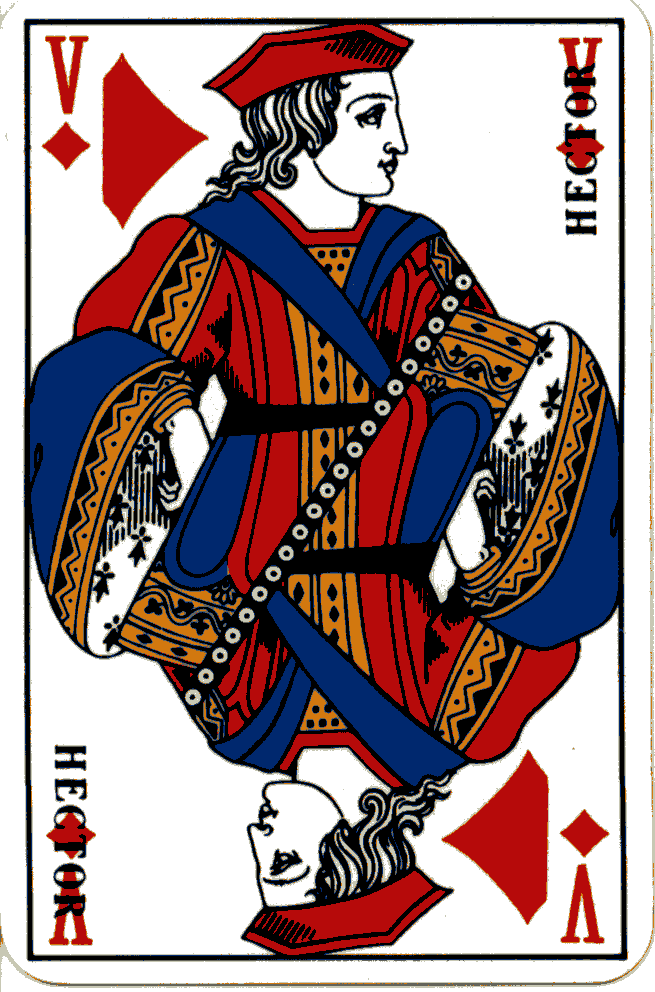 Images of cards from D.J. McAdam's and David Madore's sites

I got into a discussion the other day about how there are three different kinds of brownies. The person I was talking to had never heard of the third kind of brownie.

Photo from My Home Cooking


Ingredients are simple: cocoa, butter, sugar, vanilla, salt, flour, and eggs. Melt the butter, mix it all up, put it in a greased dish and bake it at 325F for 35-40 minutes.

Brownie #2:
Before they become Girl Scouts, girls 6-8 can be Brownies. They're part of the Girl Scouts enterprise, though they're not officially Girl Scouts yet. Activities that Brownies might do together include going to a zoo and learning about caring for animals, planning an overnight birthday celebration, camping and making s'mores, learning to swim, and deciding how many cookies to sell to earn money for trips.

They get to wear the Brownie Girl Scout Pin and the World Trefoil Pin, to show they're "part of a worldwide movement."

These girls are modeling the official Brownie gear. In real life, most brownies wear the vest and the rest of their outfit is regular clothes.
Photo from Girl Scout Council of Greater Minneapolis

Some people say they're invisible, and some say they're little men with brown skin and brown clothes. They come inside your house or barn and do things that are helpful. While you sleep, they'll do household chores, sweep the floors, secretly fix something that's broken, or other little do-gooding deeds like that. People say to be sure to treat a brownie well; reportedly, they like a little dish of cream left out for them, and maybe some cake. Or perhaps a brownie!

At long last, here is the entry on Gumby. 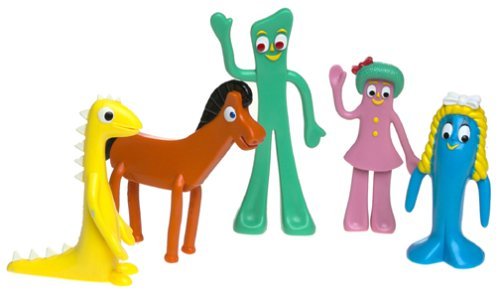 Here are all the figures, from L to R, Prickle, Pokey, Gumby, Goo, and Minga the mermaid.
(Photo sourced from Action Figures on Sale, but it's really from Amazon, where you can buy the whole set of these guys for $22.95)

For more pictures of Gumby and his friends, go to the Image Archive at gumbyworld. For some short Quicktime video clips, try this page.

Hey, Art, wherever you are, I hope you're having as much fun there as you are here.
(Photo from somewhere on the page of That One | EBD)


Sources
Gumbyworld
Absolute Gumby
Posted by the apple lady at 4:47 PM No comments:

I've been doing some more reading because I really want to know if microwave ovens are screwing up my food or even my health in some way. My biggest question is about whether the action of heating food in a microwave damages the food to such a degree that your body can get no nutritional value from it, or if it even somehow renders the food hazardous to you.

The websites that say microwaves are dangerous all say that the resulting structural isomerism is always bad, and that the food is therefore impaired in quality, sometimes drastically so. The scientific websites I've found don't really address this question directly.

The afraid-of-microwaves websites also keep telling the same anecdotes as evidence, over and over. I keep seeing the story about how one paper published in the 1980s said that microwaving breast milk changes the milk slightly. Exactly how the milk gets changed is where people get fuzzy on the details. There's also the story that gets told and retold of how in 1991 a nurse microwaved blood for a transfusion to warm it before injecting it into her patient, and the patient died. The actual cause of death was not linked directly to this microwaved transfusion; nonetheless, people paint this story in all kinds of dire language.

There's also the story of the Swiss scientist who published a paper warning of all kinds of potential, but mostly not yet measurable, dangers associated with microwaved foods. A Swiss trade association effectively barred him from publishing any more papers because he "interfered with commerce." This decision was later reversed and the doctor was given compensation. This story is told largely as a sign that the little guy, fighting against the big industry machine, was oppressed and that therefore his assertions must be correct. But nowhere does anyone citing the Swiss doctor's paper say that anyone else found data that corroborated what he said initially.

People keep telling these same stories, over and over. They also say things like, "Your mother was right to be suspicious of microwaves." They say microwaves produce radiation -- using "radiation" as a scary word, when all things with energy produce radiation, including us people.

I am not a scientist, and I don't have the means to conduct the kinds of experiments I would want to conduct to answer this question for myself definitively. I also don't have access to costly chemistry research papers that might answer my question. What I do have access to -- the public Internet -- is giving me some indications that lead me to my conclusion.

I am not impressed by the doom-sayers' techniques of citing the same anecdotes, referring to individual events that took place over a decade ago. I've seen other people use this tactic, about other topics, and it usually turns out that they're either 1) spreading gossip, 2) grossly underinformed about the facts or the science or the details behind the event, or 3) fear-mongering. I'm not accusing any of the sources I've cited of taking part in this kind of activity; I'm only saying their evidence looks a whole lot like the partial and uninformed evidence I've seen elsewhere in other circumstances.

So my take is this: I'm not going to fear my microwave, or throw it out, or try to convince others to do likewise. I'm probably not going to cook too many vegetables in it, however, but I don't really do that anyway. I mainly use it to heat up soup or some frozen doo-dad, which is not exactly high on the nutrition pyramid anyway. I already don't use it to cook all-out meals, and I don't plan to start doing so.

The upshot: I'm not going to change much about the way I use my microwave. But I sure did learn a heck of a lot about how it works.

Not long ago, a friend of mine said she hardly ever uses her microwave anymore because "microwaves destroy all the nutrients" in food. She said when she's tempted to use her microwave, she asks herself, "Do I want to get any nutritional value out of this?" and then uses her oven or stove instead.

This sounded to me like some kind of overly suspicious urban legend, but I couldn't get it out of my head, especially when I was about to microwave something. So I decided to check it out. What I found is that there are a lot of people who say that microwaves cause big problems in food. There are also a lot of other people -- scientists and people who love their microwave ovens -- who say, "Pah!"
I still have some questions, and the information I've found so far is contradictory enough, I want to keep looking into this further. More soon when I get something more definitive.

In the meantime, here's a really great site about all kinds of crazy things you can make happen in a microwave, like making ordinary tap water explode, or making a lit candle spew lightning, or even blowing up marshmallow Peeps.

Posted by the apple lady at 1:04 PM No comments:

I shot pool tonight, for the first time in maybe two years. I did all right, especially for not having played in so long. The tables in the place where we were playing had red felt on them. The chalk for the cues was also red. It got me wondering, what difference does it make if the felt is red or green? Because I think I like green better.
Sources
Frequently Asked Questions about Pool Tables, from The Factory Outlet
Frequently Asked Questions, from Best Billiard Supply
Egyptian Area Agency on Aging, Famous People, Local Stories pages on Minnesota Fats and The Hustler
Posted by the apple lady at 2:59 AM No comments:

I saw a book today about reefs. I opened the book and there were spectacular photos of super-bright fish, crazy-shaped coral, and all kinds of spiny things. I've gone snorkeling a couple of times at some reefs in the Caribbean, and I think the whole thing is fascinating. You stick your head an inch underwater, and it's like you're suddenly Jacques Cousteau, in the middle of fantasyland. 
If you want to learn more about a specific type of coral, take a look at my entry on Sea Fans.

Yesterday, I told someone that I thought I might have spring fever. Do people still talk about spring fever? Is it even a real thing?
Based on all these different descriptions of what spring fever is, and all the various explanations for it, I'm going to conclude that 1) nobody really knows what it is; and 2) everybody feels funky in the springtime. This is what fresh garbanzo beans look like, still in the pods.
(photo from Erin's Kitchen, a blog about eating in NY City)

This is what the beans look like dried.
(photo from Grains Canada)


Eating them
Falafel Recipe
Sources
Growing chickpea in the northern Great Plains, Montana State University Extension Service, 2002
How to grow chickpeas, the Gardener's Cooksite
Walton Feed's page on The Legumes. Lots of really interesting information here about beans in general.
101Cookbooks, March 19, 2005 page. Apparently, this woman is trying out recipes from her 101 cookbooks and posting the recipes she likes best. Some tasty-looking vegetarian dishes on this page.
Nutrition data for chickpeas. This nutrition data site is pretty cool. It gives a ton of information about each food item, including charts that make it easy to see what elements the food gives you a lot of, and also what other foods might be better substitutes. You can also change the serving size and see how the data changes. Really, this site rocks.
Falafel recipe from the epicentre
Posted by the apple lady at 8:49 PM 1 comment: