I wanted to do an entry on pajamas because I really like them and a nice, fuzzy, flannel topic like that might be just the thing right now, but I already did an entry on those, too.  So what's an Apple Lady to investigate?

Abraham Lincoln, wondering what the next Daily Apple topic will be
(Image from ancestry.com's rootsweb)

Since we Americans start learning about Lincoln in grade school, I'm going to try to find some little-known facts--or at least things I never knew before.

Abraham Lincoln didn't have a beard until after he became president.  Here he is in 1858.
(Photo from The American Civil War at 150) The Lincoln Bedroom, where Lincoln never slept, in 2007.
(Photo from the White House Museum)

He distributed $2,000,000 from the Treasury for war materiel without an appropriation from Congress; he called for 75,000 volunteers into military service without a declaration of war; and he suspended the writ of habeas corpus, arresting and imprisoning suspected Confederate sympathizers without a warrant. . . . From all directions, Lincoln faced disparagement and defiance. He was often at odds with his generals, his Cabinet, his party, and a majority of the American people. 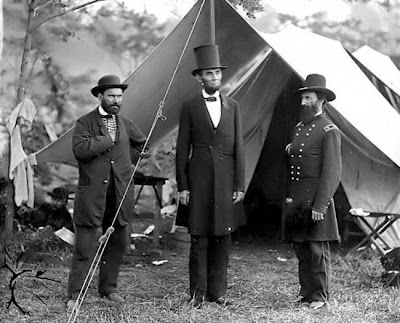 Lincoln and General McClellan at Antietam. His coat is looking a bit snug. Looks like he's got a bunch of official documents in his inside pocket.
(Photo from Kiko's House) He's aged a ton here, hasn't he?
(Photo from Entrepreneur)

The 13th Amendment states simply: "Section 1. Neither slavery nor involuntary servitude, except as a punishment for crime whereof the party shall have been duly convicted, shall exist within the United States, or any place subject to their jurisdiction. Section 2. Congress shall have power to enforce this article by appropriate legislation."
(Image from the Library of Congress; see a larger version here)

An artist's rendition of the shooting. After he was shot, he was taken to a house nearby.  The bed was too short for his tall frame, so he was laid on it diagonally and the footboard was removed.
(Photo from Abraham Lincoln Classroom. Details of his treatment post-shooting from Gizmodo)

The chair he sat in at the theatre, his shawl, and his hat are pictured here.
(That photo is (c) Abraham Lincoln Online) I've read that the movie deals almost entirely with efforts to pass and ratify the 13th Amendment.  So here's one last little fact for you about good old #13:

For some factual deviations in the movie, see The Daily Beast,

For the second time in the life of the Daily Apple, a new Pope of the Catholic church must be chosen.


I didn't do an entry on the topic the first time this came up because a lot of people have really strong, often negative, emotions about the Catholic hierarchy, and the Daily Apple is supposed to be a place to go to get away from stressful topics.  But since the subject has come up twice, and since information is one of the best tools against pretty much all bad things, I've decided to delve into this after all.

Pope Benedict XVI announced his retirement and opened a whole new can of fish.
(Photo from Pacific Standard)

Some of the College of Cardinals: the guys who decide who will be the next Pope.
(Photo from CathNewsUSA)

Sixty-seven of the current cardinal-electors were appointed by Benedict XVI, and 50 by his predecessor John Paul II. About half (61) are European, and 21 are Italian. There will also be 19 Latin Americans, 14 North Americans, 11 Africans, 11 Asians and one cardinal from Oceania among the voters. 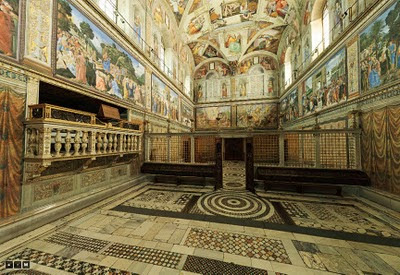 The voting cardinals used to sleep here, too, on folding cots. Now they are allowed to sleep in hotel rooms in the Vatican City. Click here for a 360-degree view of the Sistine Chapel. You'll see it's not very big.
(Photo from Our Parish Too)

About what the Sistine Chapel with the cardinals in conclave would look like.  All sorts of ceremony surrounds the casting of each of those hundreds of votes at the altar (left).
(Photo from Listverse) 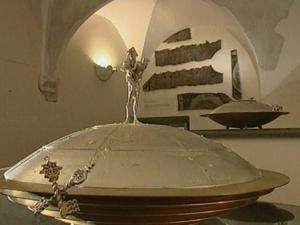 Most sources say the receptacle where the cardinals put their votes is a chalice covered by a paten, but I don't see how 120 votes would fit into a cup. Vatican TV calls the receptacle pictured here an urn and says this is what will be used to hold the votes this time.
(Photo from Vatican TV, sourced from iol news)


Ah, I see.  The LA Times has a really detailed and helpful graphic depicting this entire process, including how the folded votes would fit into a chalice.

When a Pope is to be elected, an extra oven is built and attached to the regular furnace. In this oven (right), the ballots are burned.
(Photo from Smoke Machines)

Temporary scaffolding holds up the special temporary flue that will carry the black or white smoke up and out of the Sistine Chapel. Until the name of the new Pope is announced, this is the only communication allowed with the outside world.
(Photo from Smoke Machines) 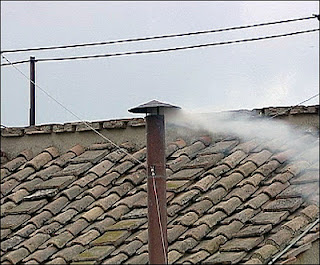 White smoke issuing from the chimney on top of the Sistine Chapel, announcing the election of a new Pope--in this case, it was Benedict XVI in 2005.
(Photo from The Voice of One Crying Out in Suburbia)

How the Winner is Determined

In the past, it has often been the case that a particular candidate has had solid majority support but cannot garner the required two-thirds majority, e.g., because he is too conservative to satisfy the more moderate Cardinals. Therefore a compromise candidate is chosen, either an old Pope who will die soon and not do much until the next conclave (which is what was intended with John XXIII!), or someone not so hard-line wins support. The difference now will be that if, in the early ballots, one candidate has strong majority support, there is less incentive for that majority to compromise with the cardinals who are against their candidate and they simply need to sit out 30 ballots to elect their man. This may well see much more "hard-line" Popes being elected.

Who May Become Pope 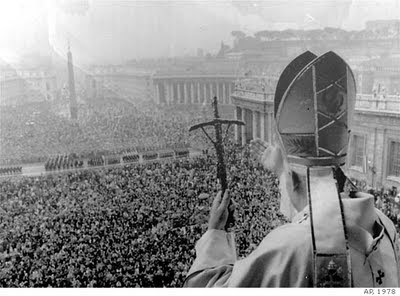 Well, it was bound to happen sooner or later.  An entry about Valentine's Day. 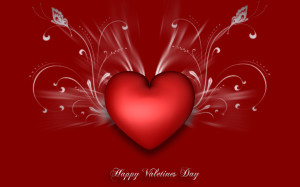 
The day is not all saccharine sappiness.  At least, its history encompasses a far greater range of emotion than how we currently think of it.

Juno, Roman goddess of marriage, women, and childbirth. That thing on her head means she's queen.
(Photo from Goddess a Day)

A rather tame depiction of Lupercalia
(Image from The Ancient Standard)

St. Valentine is the patron saint of couples either engaged or married, bees and beekeepers, and travelers.

Another depiction of St. Valentine
(Image from WhollyRoaminCatholic)


The History -- the Middle Ages to the present

Medieval depiction of marriage.  If you wanted to imagine this is St. Valentine conducting a secret marriage, I suppose you could.
(Image from Nights of Passion) 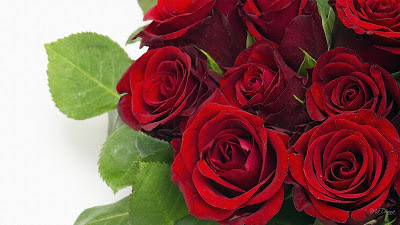 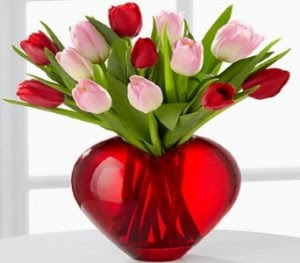 You could always be unconventional and go with tulips.
(Photo from South Bay Buys)

As kick-off time for the Superbowl approaches, I know you're all burning with the same question I have: do football players shave their armpits?

I'm not sure when I first realized that I hadn't seen any armpit hair on a professional football field in a long time, but once the thought occurred to me, I started, well, looking for armpit hair, just to see if I could be proven wrong.  When I wasn't focused on the play and when the underside of some football player's armpit was visible, I didn't notice any.

Which led me to wonder: is this a secret, widespread trend in the sport of football?  Do football players shave their armpits without saying a word about it to anyone?

Another shot of Chris Hovan
(Photo from BearMythology)

It's hard to be sure, but it looks like Chris Culliver, 49ers, shaves (or waxes)
(from somewhere on ESPN's Uni-Watch page)

Warren Sapp, Tampa Bay Buccaneers (retired), apparently does not, but he appears to be naturally light under there.
(Photo from BearMythology)

You might not believe me, but this is Tom Brady, Patriots, with his wife Gisele.  No armpit hair there.
(Photo from Barstool Sports)

Clay Matthews, Packers, totally bare under there
(Photo from Bodybuilding.com)

Drill to teach linemen how to drive-block linebackers: On Cadence lineman will attack the playside armpit of the linebacker with his helmet and hands and keeping shoulders parallel to line of scrimmage drive the linebacker backwards. (Eric Freund, Run Blocking Drills)

On how to deliver a reach-rip block: Contact will occur on the second step. On the second step, we allow our covered lineman to use a crossover step to the call side. With the crossover step we have the lineman rip his inside arm through the call side armpit of the defender. We want our covered lineman to lean on the defender after he rips through the armpit and force his stomach up field. We do this to help the uncovered lineman. He will now try to escape for the linebacker. (Doug Schleeman, Zone Blocking)

On delivering rather than taking hits: Drive up through the tackle, putting your chest on the opponent's chest. Your hips should explode forward as you arch your back and lift the opponent off his feet. Shoot your hands through the armpits of your target, squeezing your elbows and pinkie fingers together behind the ball carrier and grabbing the back of his jersey. This arm action prevents the runner from spinning out of your tackle. (How to Take a Hit as a Linebacker in Football) 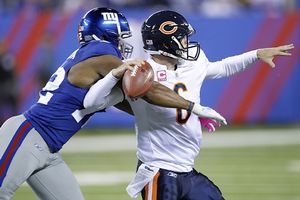 Osi Umeniyiora, NY Giants, wearing one of the cut-away jerseys as he's about to sack Jay Cutler, Bears. Can't tell, but I bet Osi shaves, too.
(AP Photo from ESPN)

Tim Tebow (gag, cough, hack, gag) clearly does not shave.  I rest my case.
(GQ photo from The Berry)