Posted by the apple lady at 9:17 PM No comments:

Woolly Bear caterpillars, that is.


A couple weeks ago, I saw one scurrying on its multiple, stubby little legs across the sidewalk. I haven't seen a woolly bear in years. I got a stick and put it in the caterpillar's path. After some hesitation, the caterpillar climbed on, and I walked for a while carrying the woolly bear on the stick.

The woolly bear in its defensive posture. This is serious business as far as the woolly bear is concerned, never mind how cute and round and fluffy and funny-looking it is to us.
(Photo from WiseAcre Gardens) Woolly bear in a finished cocoon, which is lying inside a milkweed pod.
(Photo by Ann on flickr) 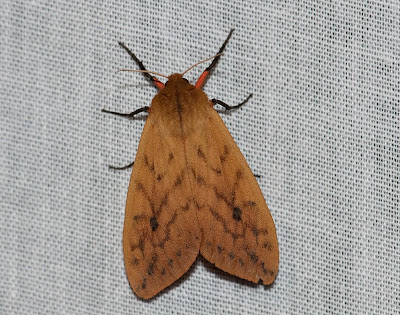 What the woolly bear caterpillar turns into: the Isabella Tiger Moth.
(Photo from EastTennesseeWildflowers)

The same moth with its wings spread a bit.
(Photo from Wing Watchers) 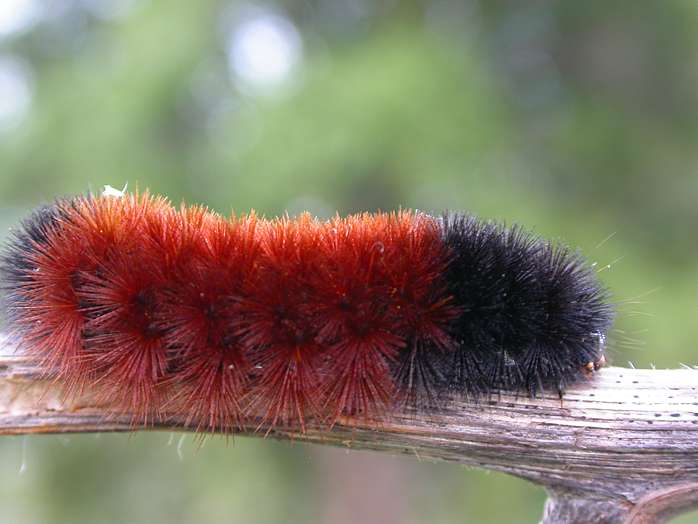 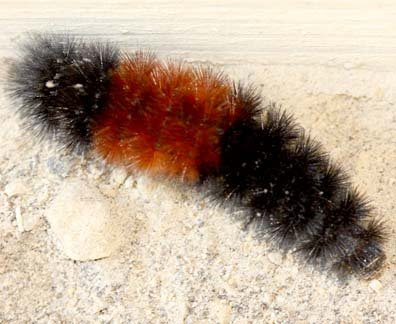 Fewer bands of brown. This one has had more to eat than the one above.
(Photo from Ecobirder)

This is 2011's winner, YoYoMa, on the nose of owner Matt Buckland. YoYoMa's winter forecast is very detailed, week by week. In general, he says it will be cold and snowy.
(Photo from the official Woolly Worm Festival in Banner Elk)

(Photo from Cooking from the Market, which has a recipe for pumpkin soup)

There is actually a club for people who have grown pumpkins that weigh over 1,100 pounds. It's called the called the 1100 Club. This guy, Larry Checkon from North Cambria, PA, is a member and also a former world record-holder, with his pumpkin which weighed 1,469 pounds.
(Photo from the Pumpkin Nook)

The University of Illinois is in Champaign. All the pumpkins are in nearby Peoria. Barack Obama's house is in Chicago.
(Map from Joel Ward's real estate seminars)

This drawing called "The Pumpkin Effigy" appeared in The Ladies Floral Cabinet in September 1875.
(Photo from Inspiration Line) Since the idea of the Jack O'Lantern is to scare off Stingy Jack who was kind of a rotten guy, I wonder which would work better, a happy face or a scary face.
(Photo from Wikimedia Commons)

It's a pumpkin extravaganza at The Pumpkin Show in Circleville, Ohio. The 2008 Pumpkin Show was this past weekend, but you can go again in 2009, on October 21-24. They have a largest pumpkin contest, a Miss Pumpkin pageant, a carnival at night, and not just one parade, but several.
(Photo from the Circleville Pumpkin Show)

Silly Putty. Just because.
(Photo from Games & Jigsaws, where you can buy an egg of Silly Putty for $1.79.)

Lifting images using Silly Putty is one of its most common uses. An entirely practical application.
(Photo from HowStuffWorks)

Frank Borman on board the Apollo 8, where somewhere there are also some eggs of Silly Putty.
(Photo from Wikipedia)

This is only one case of Silly Putty, which holds 100 eggs, or 1/120 of the number of Silly Putty eggs made in a day. If you really wanted this much Silly Putty, it would set you back $120.
(Photo from the Crayola Store)

Form Silly Putty into a ball, throw it at the stock market listings and invest in the stock it lifts off the page. (Peter H. from Collinsville, CT)

End an unbearable date by making a swollen gland with Silly Putty and excusing yourself because you're not feeling well.

Make a boat for your pet hamster.

Here are some unusual things that people have actually done with their Silly Putty: After twelve people spent two hours stabbing, twisting, and wrestling with the stuff, everyone in the group had gotten some.
(Photo from the Official Google Blog)

Here's the tank with the areas he doesn't want to turn tan covered with the Silly Putty. After he sprayed on the tan color, after a few minutes it looked like the Silly Putty was melting. So he put the whole thing in the freezer. "Worked like a charm." After the paint had dried, he peeled off the Silly Putty and everything was the color he wanted it to be, and he was able to use the Silly Putty again.
(Photo from ModelGeek)

This stuff will stain clothes and surfaces, so don't get that bloody putty on anything important.
(Photo from Nerd Approved. Bloody Putty is available for $4.99 from Club Earth)

These kids made their own Silly Putty and are justifiably proud of it.
(Photo by Tie, on PicasaWeb)

This recipe uses glue, water, and starch, plus food coloring.


Here's another recipe -- with a soundtrack, even -- that uses glue, water, and borax. The results with this one are a little more runny.

By the way, if you get Silly Putty stuck in your hair, several mothers say they had success in using Pam cooking spray and a fine tooth comb. Another mother said that hand sanitizer worked even better to get it out.

The past couple of days, I've caught myself using the word "stuff" way too often. In one e-mail that was about two sentences long, I used it twice. Then I heard myself say it in a conversation two times in about five minutes.

I don't mean "stuff" as a verb, but as a noun. For example, "I've got stuff I have to get done," and "Where am I going to put all that stuff?" and also as a sort of throwaway add-on at the end of a sentence: ". . . so she was being all mean, saying all kinds of insults, and stuff."

I heard myself use this word enough times, I thought, but what the heck is stuff?

The quilted material (stuff) used under chain mail was made into a padded shirt like this one, called a gambeson. Crusaders realized these shirts provided extra protection after they saw the Arab soldiers they fought wearing them.
(You can buy a gambeson like this one from Medieval Fantasies Co. for only $95! That stuff's not cheap!) 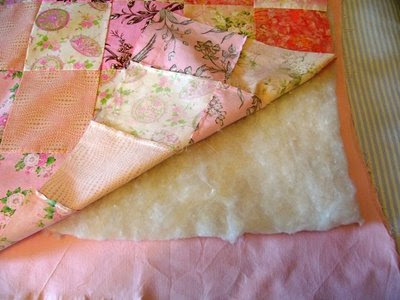 An overstuffed chair and ottoman (footstool). See, it doesn't look like it's stuffed too full so that the stuffing is coming out of it or anything, right? It just looks stuffed. Still, it's called overstuffed.
(Available from All Barstools for $529.) 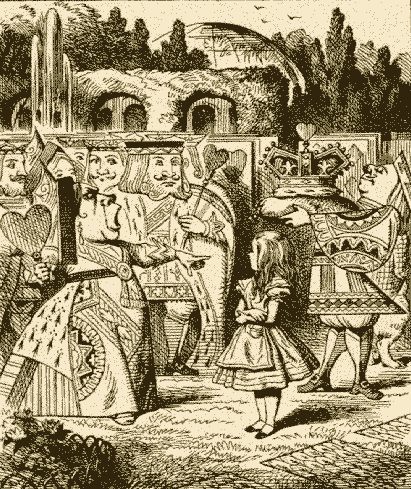 “No, no!” said the Queen. “Sentence first—verdict afterwards.”
“Stuff and nonsense!” said Alice loudly. “The idea of having the sentence first!”
(Illustration by Sir John Tenniel, sourced from ibiblio) Turkey, stuffed with stuffing
(Photo from Dressing Recipes, which has lots of tips & recipes about turkey stuffing)

So, a lot of stuff can be stuff. Now I don't feel so bad for using that word as much as I have. Because it's really useful for a lot of stuff.

Here's an audio file containing this exclamation (it's toward the end).

This phrase, for those who don't know or remember, is from a scene in Animal House when several members of the disreputable fraternity Delta Tau Chi go to the grocery store, called Food King, and blatantly steal all kinds of food.

If you've been in a college dorm, you've probably seen this poster. It's #1 on College Happenings' top 28 dorm room posters. 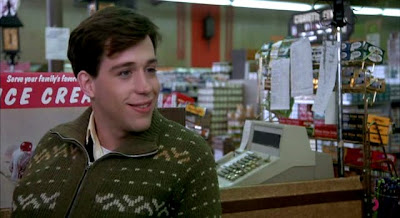 Larry (Tom Hulce), his sweater stuffed full of meat, chatting with the cashier at the Food King.
(Photo from Video Adrenalin)

You may be glad to know that there are several grocery stores on the East coast that are still in operation called Food King. This store, I think, is in Washington.
(Photo from the MySpace page of someone named Valis)

Those lovable ruffians from Delta turned 30 this year.
(Photo from Nice Picture.info)


The movie recently turned 30 years old (shocking!). For you kids out there who think that means it's obsolete, here is proof that this movie remains an important cultural reference point:

By the way, you can download the entire movie for only $3 from Amazon.

Remember, Bluto went on to become a US Senator.
(Photo from Young Manhattanite)


Sources
Audio file from tfmuch.com, which has lots of audio files from Animal House
IMDB, Animal House
Posted by the apple lady at 12:39 AM 2 comments: