You may have seen the news articles that the 13 year-old boy, Arvind Mahankali, who won the Scripps National Spelling Bee secured his win by spelling "knaidel."  Like me, you may have wondered, what the heck does that mean? This knaidel is made from potatoes, for a gluten-free variety, and is served here in chicken soup.
(Photo and recipe from The Shiksa in the Kitchen)

Matzoh balls, sans broth.  Matzo balls are made from matzo meal, which is unleavened wheat flour, chicken fat, and eggs.
(Photo from The Cook's Thesaurus)

This mix says you can make your own knaidlach, and gluten-free too.
(Photo and mix from Always Kosher)

The woman who made these spells them matzah balls. I wonder how Scripps handles variant spellings.
(Photo from Kveller. She's also got about 5 different recipes, from spicy, to potato, to fluffy, to not cholesterol) 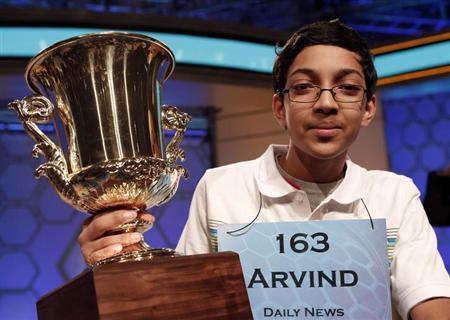 This is Arvind with his trophy. I wonder if he'll celebrate with a bowl of knaidel, or matzo ball soup.
(Photo from Reuters)

I'm going to be away from the internet on Sunday, so I thought I'd give you a little Daily Apple for your Memorial Day weekend.  Let me tell you about a plant I noticed for the first time recently.


It's called the Sessile Trillium. 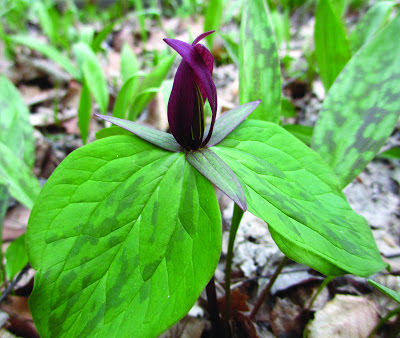 Sessile Trillium. You can just make out, inside the arching petals, the stamen standing straight up.
(Photo by the Apple Lady. For some reason, when I uploaded my photos, the colors got over-bright. Not sure why that happened.) 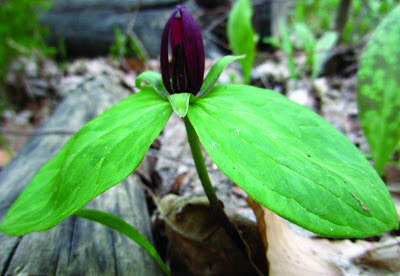 Here you can see how the petals are arched over the reproductive parts, and there is open space between the petals.  You can also get a better idea of how the leaves and the petals are all attached at the same place.
(Photo by the Apple Lady)


P.S. I can't recommend this book highly enough. The pages on the left hand side are full-color photos and the facing pages describe the plant.  Everything is organized by flower color, so it's really easy to use.

The other day, as I was driving away from a friend's house out in the country, I saw two gigantic black shapes up in a tree.  They were so big, I thought they couldn't be birds, they must be black trash bags caught in the tree or maybe someone had put statues of owls up in the tree to scare away the woodpeckers.  But when I looked again, I realized they were actually birds.  They were so enormous, I knew they had to be turkey vultures.

I stopped, turned around, pulled over to the side of the road, and took pictures using my handy built-in zoom lens. They didn't move, and they looked so bizarre that, even though I was looking at them through my camera, I doubted for a moment that they were real.  They looked like statues, or somebody's bizarre idea of what clown-birds from outer space might look like. Then they moved.  It kind of spooked me. 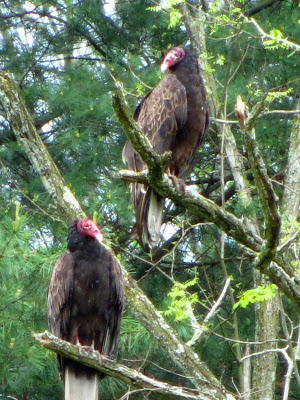 A pair of turkey vultures (a.k.a. clown-birds from outer space)
(Photo by the Apple Lady) The light vs. dark coloring on the underside of the turkey vulture might be the most obvious identifier.
(Photo from the Cornell Lab of Ornithology)

Don't They Eat Dead Things? And Isn't that Gross? 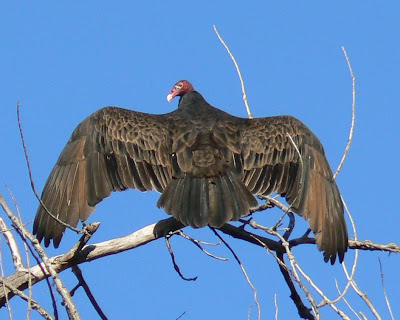 Sometimes you see turkey vultures hanging around with their wings open a little, like this.  They're probably letting their feathers dry after a heavy dewfall, or else regulating their body heat.
(Photo from Ask the Birds and They Will Tell You)

These turkey vultures may look like they're circling over some carrion, but actually, they're just migrating.
(Photo from Cornell Lab of Ornithology's Birdscope) 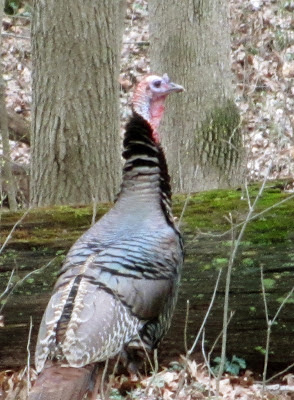 The wild turkey has a bald head like a turkey vulture does, but it also has the wattle under its chin and that knob over the beak which is called a snood.
(Photo by the Apple Lady) Wood stork, more closely related to the turkey vulture than the turkey or the hawk.
(Photo from Birds and Gators)

Daily Apple reader Laxmi asked me a pretty difficult question, which actually turns out to be quite timely and intriguing:

Apple Lady, what happened to all the European currency from different countries after the Euro was adopted? Did the banks just start hoarding the Francs and Drachmas and burn them all up or something? Thought of this over the weekend when I found some coins in a box...

French franc from 1974
(Image from UCoin)


The reason this gets interesting is because a lot of people are talking about the possibility of one or two countries leaving the Euro, or going back to a national currency, or the whole EU dissolving altogether.  So could those old coins possibly become the currency of choice again?  And, I'm assuming the reason Laxmi is asking, could they maybe be worth a little more?

As is inherent in Laxmi's question, the answer to what might happen in the future lies in what happened in the past.

Member states of the EU.
(Map from Wikimedia Commons)

In addition to the above 17 member states, 10 other countries are members of the EU, but they do not participate in using the Euro currency.  These 10 countries are Bulgaria, Czech Republic, Denmark, Latvia, Lithuania, Hungary, Poland, Romania, Sweden and the United Kingdom. Iceland, Macedonia, Montenegro, Serbia, and Turkey are all acknowledged candidates. This package of $150 worth of shredded bills can be yours for only $20.
(By the way, it is illegal to intentionally deface or destroy US currency. So don't try this at home.)
(Photo from DC Gift Shop) An Irish pound coin, or punt.  I won 20 Irish punt on my 20th birthday.  That was a good day.
(Photo from Wikipedia)

In case you're wondering, Montenegro is pretty much between Bosnia & Serbia.
(Map from Eurail)

The 20 Deutsche mark, no longer in circulation--but still out there, apparently.
(Image from Leftover Currency) 
Related topics: Dollar signs (includes a section on the Euro symbol)
Sources
European Commission, Scenarios for adopting the euro
Joe Weisenthal, If the Euro Breaks Up, This Is What Will Happen to Each National Currency, Business Insider, Apr 3, 2012
Jens Nordvig and Nick Firoozye, Planning for an orderly break-up of the European Monetary Union, Submission to the Wolfson Economics Prize, Jan 2012 (p 45)
David Enrich et al., Banks Prep for Life After Euro, The Wall Street Journal, Dec 8, 2011
European Central Bank, Use of the Euro
Tony Patterson, Mystery of Germany's 13bn Missing Deutsche Marks, The Independent, Jan 2, 2012
Daniel Indiviglio, The Destruction of Money: Who Does It, Why, When, and How? The Atlantic, Apr 8, 2011
Jill Insley, A fistful of francs: Forgotten foreign currencies still have value, The Guardian, Sept 9, 2010
ABCNews, What to Do With Old European Money? Jan 4, 2002
Posted by the apple lady at 11:33 PM 2 comments: Links to this post