A jaguar wearing jodhpurs in the jungle may attack the jugular.

(Yet another entry brought to you by the letter J.) 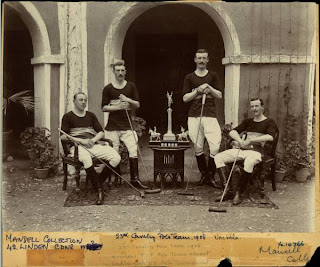 Jodhpurs worn by the British 23rd Calvary Polo Team in 1908.  No reinforced sections by the knees are visible, but the flared thighs and tapered knees definitely are.
(Photo from Wallflower Dispatches) 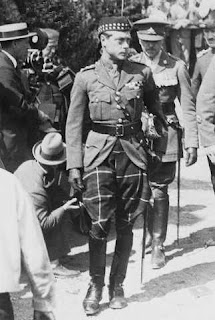 Edward VIII, who would become Duke of Windsor, wearing a Scotch Highlander uniform, which included jodhpurs, during a visit to Canada in 1936. He doesn't look very happy about it.
(Photo from Wallflower Dispatches)

By the 1920s a lot of women wore jodhpurs, too. This woman is wearing them at Tattersall's horse auction rooms in London.  Though judging by the hats, this might be more like the 1930s.
(Photo from Wallflower Dispatches) 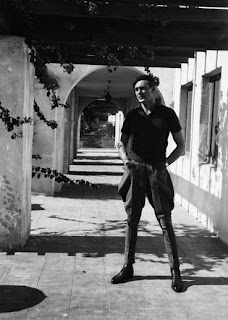 Jodhpurs were also a hit among the fashionable and the movie stars.  Here, Gary Cooper is sporting a pair.
(Photo from Wallflower Dispatches) 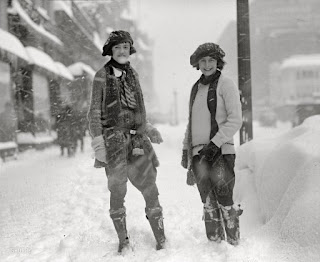 Though jodhpurs were a hit with British aristocracy -- who could afford horses --and movie stars, regular people liked wearing them too.  These women in Washington, D.C. seem to be enjoying their jodhpurs, and there's nary a horse in sight.  This is from 1922.
(Photo from Wallflower Dispatches)

Current women's  jodhpurs with that extra reinforcement across the seat. On the sites I saw, jodhpurs that included this extra material were usually referred to as "breeches."
(These breeches are available from Derby House for £50.)

On these jodhpurs, you can see the extra reinforcement at the knees.
(Available from Clarke McKenzie in New Zealand for NZD$115)

As you can see in this remarkably clear photo of Calvin Borel riding 2009 Derby race-winner Mine That Bird, professional jockeys' pants are not skin-tight but are loose enough at the thighs, like traditional jodhpurs, to allow freedom of movement.
(AP Photo from Sulekha.com)

Not only do professional racing jockeys' jodhpurs still have the extra material at the thighs, they also have the reinforcement in the seat -- and their names embroidered on the waistband.
(Photo from Flickr, linked to without attribution by ESPN.com) 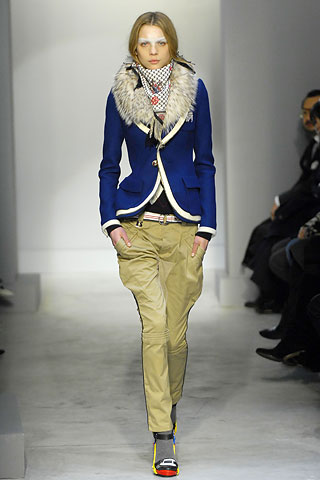 One of the pairs of jodhpurs featured in Balenciaga's Fall 2007 collection.
(Photo from Fabsugar)

These are called tuxedo jodhpurs and they're made by fashion designer Robert Rodriguez.
(Photo from Blogue US)

Nearly every show included a note in the credits that the angels' clothes were provided by Givenchy Sport.  So I'm guessing that's who made Kate Jackson's jodhpurs.
(Photo from Pretty Boring)


What's your vote?  Jodhpurs, thumbs up or down?

Sources
Wise Geek, What are Jodhpurs?
Online Etymology Dictionary, jodhpurs
Fabsugar, Definition: jodhpurs
Posted by the apple lady at 12:59 AM 5 comments: Links to this post

A jaguar in the jungle may attack the jugular. 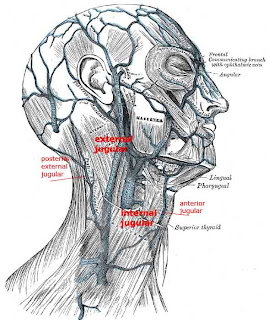 This diagram shows all the veins in the head and neck.  I've labeled four -- the jugular veins.
(Diagram from Gray's Anatomy with my labels added)

This man's jugular is visible, as indicated by the arrow.  This is usually an indicator of hypertension and some level of heart failure on the right side of the heart.  You do not want to be able to see this.
(Photo from Wikimedia Commons)


The moral of the story: don't mess around with the jugular.  The end.

This is the second in a series of entries about words that start with the letter J.

One of the places jaguars live is in the jungle. Guys hanging out in a hobo jungle, around 1895.
(Photo from Sarah White's site In Search of the American Hobo)


There's more to come on this topic, I promise.  I've been playing with the template of this blog -- no luck yet, but that soaked up a huge chunk of time.  I have to stop for now so I can get some sleep!

Sources
OneLook, jungle
Sarah White, University of Virginia, In Search of the American Hobo
Posted by the apple lady at 1:13 AM 2 comments: Links to this post

Don't forget to set your clocks ahead one hour tonight.

Daylight Saving Time
Posted by the apple lady at 10:58 PM No comments: Links to this post

This is the first entry in a series on words that begin with the letter J.

Places where jaguars live are shown in yellow.
(Distribution map from National Geographic) Here you can clearly see the rosette shape -- almost circles with a dot in the middle.  Not every jaguar's spots form such an obvious pattern as this, but they do all generally make that circular shape, especially on the cat's flank.
(Photo from Big Cat Rescue) This jaguar's fur is nearly black, though you can still make out a few spots.
(Photo from Big Cat Rescue)

I happen to have an interest in the letter J.  Plus, the other day, I got to thinking about it.  It's pretty unusual, how in some languages it's pronounced like a Y, or how it sometimes acts like an I.  That seems unusual for a consonant to act like a vowel sometimes. Well, the letter Y does that, but then, Y and J seem to be distant cousins or something.

Good old J.
(Image from Like a Warm Cup of Coffee)


Anyway, I've been ruminating on the letter, so I'll tell you some of the things I found out about it.  Then I think I might do a series of entries about things that begin with the letter J.

In American Sign Language, the j is one of the few letters you draw in the air.
(Photo from How You Build It)

The letter J:  fleeting and changeable as letters written in sand? (Your Apple Lady can get melodramatic about the alphabet)
(Photo from Cook-n-Knit)


All right, all right, Jason [see comments].  I'll try to answer how all this differentiation came about.

The short answer is that the change is the same as any change that happen in a language or alphabet, which is that people started doing it another way and it stuck.  You may remember this from the entry about dollar signs, for example.  Exactly why these changes happen is very difficult, if not impossible, to answer. So really the best answer I can give you is a description of the process where we can see that change occurring.

There are very few sources -- reputable or otherwise -- online that discuss this process.  So I'm going to rely, once again, on my ever-trusty copy of the OED to address this thorny progression.  (I can't recommend this text enough, by the way.  It is an endless source of edification and enjoyment to me.)

The micrographically-reproduced two-volume set of the Oxford English Dictionary: this girl's best friend. I got it for $30 from the Book of the Month club many years ago.  You can also subscribe to the more updated online version at oed.com.


The OED's discussion of the letter J at the beginning of its J entries runs almost 3 columns in very very tiny print.  I will do my best to summarize while maintaining clarity and accuracy.


this y-sound had, by compression in articulation and consequent development of an initial 'stop', become a consonantal diphthong, passing through a sound (dy), akin to that of our di, de, in odious, hideous, to that represented in our phonetic symbolization by (dʒ). 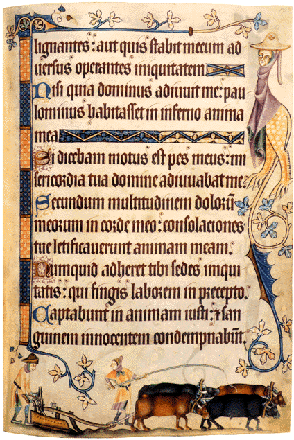 This didn't turn out quite like I planned, but I hope it's at least clear enough that you can see my point.  The words on the left, which are Latin or Old French words, use the i, while the words on the right use the j.  Even though the words on the left are fairly legible, the j in the words on the right has the effect of separating the syllables and making the parts of the word distinct.
(By the way, these are all modern script fonts. From top to bottom, I used Bickham Script Pro, Snell Roundhand, Shelley Allegro, Vladimir Script, and Amazone BT.)

On this page, which is taken from a Psalter from Flanders that was made around 1260, you can see on the right side about midway down the page, instead of a dot over the i, they made a kind of tilde.  This, too, was another way to make the i distinct. This sort of alteration may have influenced the shape the capital J would later take.
(Photo from Gallery in the Vault, which collects and sells illuminated manuscript pages.)

As the OED points out, the close relationship between the I and the J is still apparent in the fact that some people write their script J's in a way that looks a whole lot like a script I -- like this one does.
(Actually, this J is art, specifically, landscape architecture by Joanna Massey at North Carolina State.) 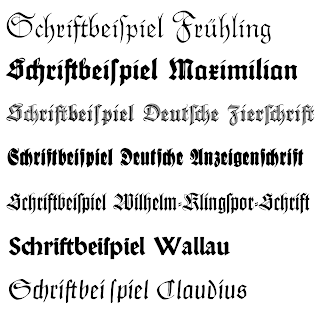 Some examples of Blackletter calligraphy
(Image from Typography 01) lower case j stamped into copper. the j is here to stay!
(Photo by Leo Reynolds on Flickr)

The next thing I want to do is look at a few words that I like, in English, that start with the letter j. I promise, those will be more light-hearted and less brain-heavy than this entry. The hour is way too late for me to start doing that today, so for the moment, I'll give you links to some j words that I've already done.

Yes, I'm reaching with a couple of those.  But I have surprisingly few entries that start with the letter j.  If there are any j topics you're interested in, post a comment to this entry and let me know.

Thought I'd do an entry about the flower for the month, which happens to be the daffodil.  So here you go.

(Photo of daffodils from Let Us Talk)

Narcissus, looking at himself, and Echo, the hapless nymph who fell in love with him.
(Painting of "Echo and Narcissus" by John William Waterhouse, is at the British National Museum in Liverpool)

Where daffodils originally come from.
(Map of the Iberian Peninsula from Worldatlas.com)

Paperwhites are one kind of daffodil.
(Photo from Sherwood's Forest Nursery) This daffodil's center, which is often referred to as the trumpet, happens to be orange center.
(Photo from the University of Nottingham)

Representation of a daffodil as it grows from bulb to flowering plant.
(Image from Doug Green's flower-garden-bulbs.com) 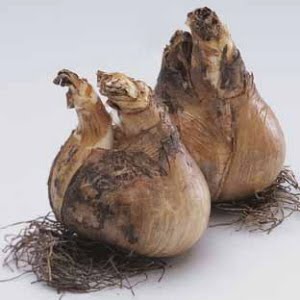 This is what daffodil bulbs look like.  Wonderful that they turn into those bright and nodding flowers, isn't it?
(Photo from Catholic by Grace)


Here's that famous poem that's got daffodils in it:

I wandered lonely as a cloud
That floats on high o'er vales and hills,
When all at once I saw a crowd,
A host, of golden daffodils;
Beside the lake, beneath the trees,
Fluttering and dancing in the breeze.

Continuous as the stars that shine
And twinkle on the milky way,
They stretched in never-ending line
Along the margin of a bay:
Ten thousand saw I at a glance,
Tossing their heads in sprightly dance.

The waves beside them danced; but they
Out-did the sparkling waves in glee:
A poet could not but be gay,
In such a jocund company:
I gazed---and gazed---but little thought
What wealth the show to me had brought:

For oft, when on my couch I lie
In vacant or in pensive mood,
They flash upon that inward eye
Which is the bliss of solitude;
And then my heart with pleasure fills,
And dances with the daffodils.

Wordsworth wrote this poem after his sister told him about coming across a field of daffodils. Perhaps what she saw looked like this:

This field of daffodils is on a hill in Volcano, CA.
(Photo by Kepola on Panoramio)