So my friend Margaretta bought a house. I wish I owned my own house. I think this means that I am jealous. Or am I envious? I know there's a difference between the two, but what is it? And which of the two am I?

I think maybe I'd like a bungalow like this one. Nothing too big or too fancy. But I would like a big tree out front, for some shade.
(Photo from StarCraft Custom Builders)


I'm looking at my Oxford English Dictionary, and there are scads of definitions for these terms. I'll summarize the best I can while still preserving some sense of organization. 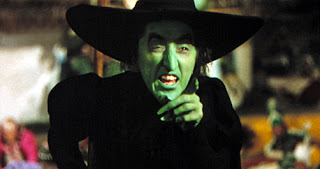 The Wicked Witch of the West might be the best personification of the malicious meanings of envy. She wants those ruby slippers so badly, she's filled with ill will, malice, and enmity toward Dorothy. By the way, to be "green with envy" means you're so filled with envy, you're sick to the point of turning green.
(Photo sourced from The Pop Culture Divas)


Leave it to the French to depict jealousy in all its fullness. In this 1994 remake of L'Enfer (Torment or Hell), Cluzet plays a hotel manager who is increasingly suspicious that his wife is cheating on him. As the movie progresses, his jealousy becomes more and more obsessive until, well, until things go very wrong.


The original L'Enfer, filmed in 1964, intended to go even further. The director, Clouzot, filmed a lot of sequences in which he played with lighting like mad. The effect is an evocative indication of the distortion of the jealous husband's mind, the way he sees her as constantly changeable, taunting, yet always out of reach. I think the green/blue/yellow portions are especially effective.

I say the film "intended" to go further because the director suffered a heart attack during filming and the movie was never finished. A documentary from 2009 (L'Enfer d'Henri-Georges Clouzot) showed some of the extant pieces of the film together including test shots like the ones in the above sequence, along with commentary and stills of what happened during filming.

By the way, don't confuse these with the 2005 L'Enfer. That one, like the 1994 film, also stars Emmanuelle Béart, but the storyline is completely different, about three sisters with a terrible event in their pasts.

And, as long as we're on the subject of the Fench and jealousy, there's also Alain Robbe-Grillet's Jealousy. But while it's quite gripping and travels much the same path that L'Enfer does, it's a novella and it doesn't have any pictures in it, which sadly makes it less exciting for most website audiences.

You may remember what Dr. Hannibal Lecter taught us about coveting. He asks Clarice, about the serial killer "Buffalo Bill," "What is his nature?" She guesses that he kills women, but Dr. Lecter says, "No. That is incidental. He covets." Buffalo Bill (Jamie Gum or Jame Gumb) is perhaps the best example of how coveting can go seriously wrong.
(Photo from starpulse.com)

None of these things is really a good emotion to have. I wouldn't recommend that anybody go around feeling envious all day, for example. And in exploring these words, we've encountered some pretty unsavory people. So in this sense, I've violated the spirit of the Daily Apple.

But I did want to know the distinctions between these words, and I do feel better for knowing them. And I would recommend going around consulting the dictionary all day, if you felt like it. So I think the appropriate thing to celebrate here is the Oxford English Dictionary.


Related entries: Eat Your Heart Out

The magnolia trees in my neighborhood are blooming. I know they're early bloomers each year, sometimes so early the snow is falling on the blossoms. But since we've been having summer-like weather in early March, I wondered if the magnolias are blooming any earlier than usual. 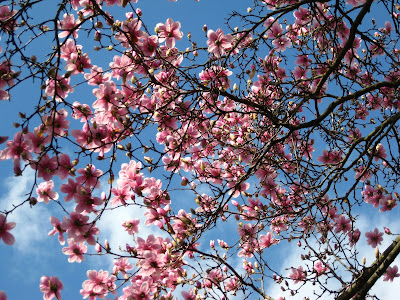 Magnolias in bloom
(Photo by the Apple Lady)

The Jane Magnolia is semi-evergreen, and it has tulip-shaped flowers which are pinkish-purple on the outside and bright white at the center.
(Photo from Fast-Growing-Trees.com. You can order a 3-4 ft. Jane magnolia from here for $69.)

The Southern Magnolia can grow to be 60 to 90 feet tall. Its flowers are entirely white.
(Photo from Missouri Botanical Garden)

Sweetbay Magnolia flowers are a creamy white and the petals tend to do this rounded, scoop-like thing. They also have a light, lemony fragrance.
(Photo by Rodger Hamner, from University of Florida IFAS Extension) 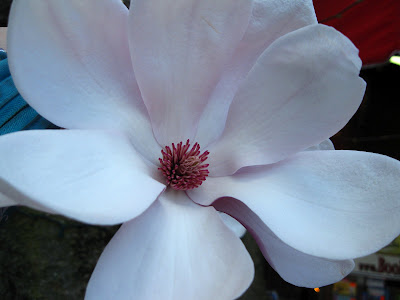 Close-up of what I think is a Saucer Magnolia. Looking down on the blossom from above, you can just barely make out a tinge of pink in the otherwise white petals. So you might be tempted to say these flowers are white.
(Photo by the Apple Lady) 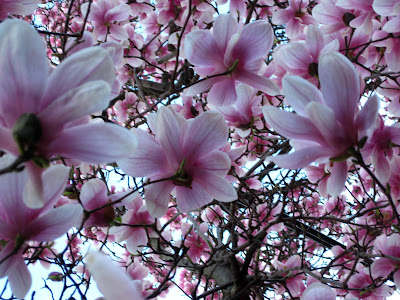 But what fascinates me is that from underneath, these very same flowers appear to be mostly pink. The pink color seems to be confined to the outside, undersides of the petals. It's funny that more of the pink doesn't appear in the flowers when looking down on them from above.
(Photo by the Apple Lady) 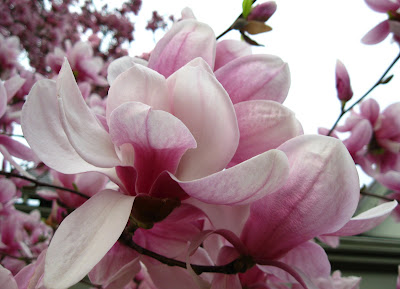 Whenever the Magnolias bloom, they sure are a welcome sight after winter.
(Photo by the Apple Lady) 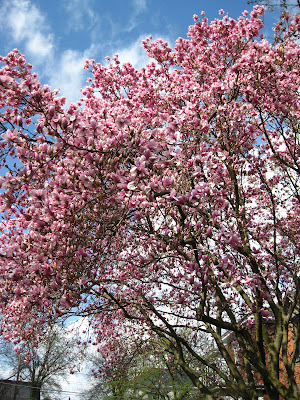 This magnolia plainly has lots of main stems, so even though it is fairly tall, it should probably be called a shrub.
(Photo by the Apple Lady) 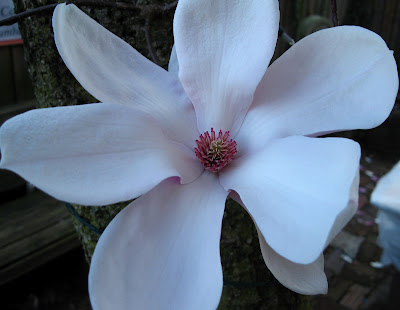 Did the earliest flowers look something like this?
(Photo by the Apple Lady)

When I went to the grocery store the other day, they had a lot of pears. Different kinds of them. I've eaten all three kinds before but I couldn't say which one I liked best. So I thought I'd try all three and compare. And I also decided to find out exactly what is the difference between the varieties. 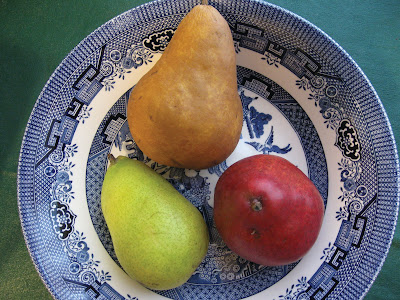 3 pears. The brown papery-looking one is a Bosc pear, the red one is a Red Anjou, and the green speckled one is a Bartlett.
(Photo by the Apple Lady)

They weren't quite ripe when I bought them, and I've had only one of them so far, the Bartlett. It's been a while since I've eaten a pear, and it was a very pleasant experience. The pear was really juicy, and the flesh's grainy texture makes the whole experience at once lush and delicate.
I haven't tried the other two yet, since I'm still waiting for them to ripen. But I thought, in the meantime, I'd learn about the different varieties and then I'd know what I'm eating.

There are all sorts of varieties of pears -- way more than what you usually see in the grocery store.
(Photo from A World Community Cookbook)

All pears taste like pears -- juicy and sweet and soft. So when I describe how they taste, I'll indicate in what way they are different than other varieties.

Bartletts are yellow-green when they're ripe. The skin has little brown speckles.
(Photo from Nature Hills Nursery)

Green Anjou (an-SZHU) pears are similar in color to Bartletts. But their shape is smaller and more squat.
(Photo from Cook's Thesaurus)

Red Anjou pears, like their green counterparts, have a similarly squat neck and compact shape. Their skin is a dark husky red.
(Photo from Cook's Thesaurus) 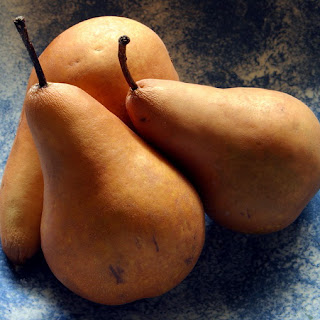 With their tall, skinny shape, you might think Concorde pears are green Boscs. But they're not, and they taste quite different.
(Photo from USA Pears)

The Starkrimson looks similar to a red Anjou, but its red is a brighter, shinier red and its shape is narrower.
(Photo from The Fruit Company) 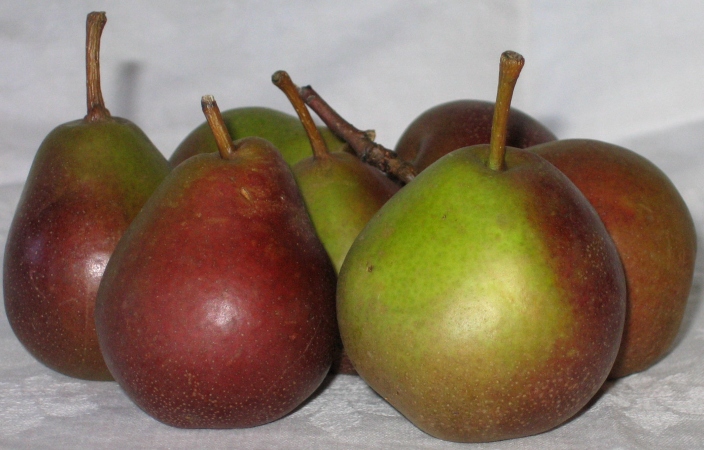 Seckel pears are very small. The green on their skin is almost olive-colored, and they have patches of red blush.
(Photo from the Seasonal Chef)

Comice pears are round and short with a very short neck. They're usually green with a large red blush, though some are almost entirely red. They're often a favorite in Christmas gift baskets.
(Photo from Twisting Vines)


If I ever see a Comice pear in a store, I'm eating it.

I just got back from a good but tiring vacation. I must get some sleep, but before I do, I want to find out about something I encountered on my vacation -- a Venus' Flower Basket. The bleached skeleton of a Venus' flower basket, or a glass sponge. The fibers are made of silica, a.k.a. glass.
(Photo from the Natural History Museum, London)

Three Euplectella living underwater. They don't live in colonies the way coral do; it's just that these three happened to set down roots near each other.
(Photo from telecomBlog) 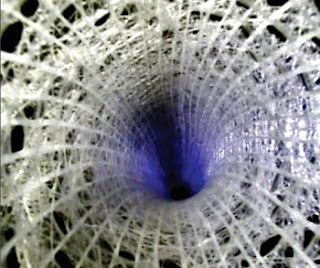 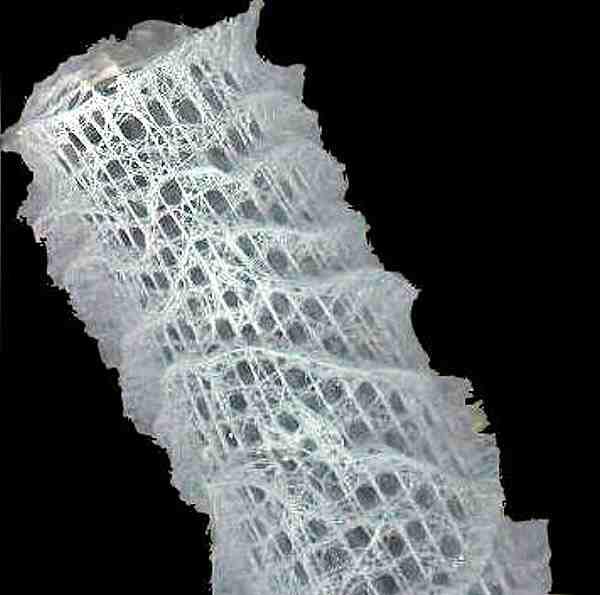 This image gives you a good sense of the underlying mesh and the syncytium that winds around the top of it.
(Photo from Richard L. Howey's page on the Euplectella aspergillum) Shrimp inside a Venus' love basket. Is it eternal love between shrimp, or is it really intraspecies cooperation -- which may itself be a form of love?
(Photo from Fresh Photons)

Most of the bleached skeletons have lost the little fibers at the end, but here they're intact and very visible. This sponge has tons of those little hairs. Which can act like a fiber optic cable.
(Photo by Ryan Somma, sourced from oneworldoneocean.org)


Like all sponges, these animals have no brain, no nervous system at all, no organs like a heart or stomach or kidney. They don't even have that many types of cells. Yet they build their own bodies in these complex, mathematical shapes, they make their own fiber optic cables, they glow in the dark, and they house a pair of shrimp for life to boot. Pretty incredible stuff.