Days later, I look back at the previous entry and think, "Oh, innocent fool." I was not, in fact, a day away from recovery. It turned out, my computer had so much spyware on it -- spyware that was not detected by any of the three programs I ran, including one I purchased -- that every time I got online, it continued to download more spyware and more adware like mad. It was as if my computer was shouting, "Hey you guys! Over here! This patsy's open!" One of the tech support guys at my internet service provider told me that every time I logged on for the past few days, enormous amounts data were being sent to my computer, more even than my computer knew how to handle.

I was told it would take at least $100 for professionals to "clean" away the spyware. My PC was old, fashioned for me by a friend back in 1999. I had already replaced the hard drive once, in 2001. Then the start button fell apart so that I was essentially hot-wiring it every time I started it. It had USB ports but no drivers. Etc. etc. So I purchased a new computer.

I come to you now from a brand, spanking new HP system. I am still paranoid about downloading bad stuff, so I have three anti-spyware programs running. I plan to "sweep" my system with all of them after I log off. Based on my experience with the nastiness, I highly suggest that you do the same. Spyware is pernicious. It's ineradicable. It's the kudzu of the Internet.

I like penguins. Here are a few facts about them. 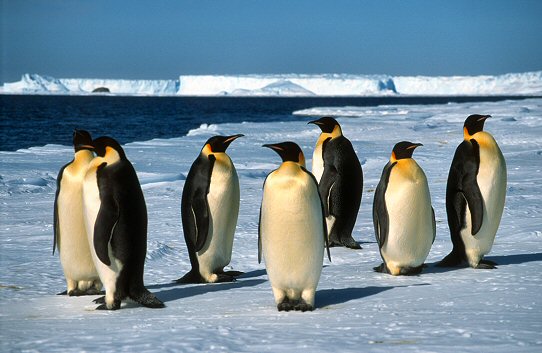 Posted by the apple lady at 6:44 PM No comments: Links to this post

For the past few days, I've been battling a nasty case of spyware. I downloaded something that I thought would allow me to look at a map, but lo and behold, it was spyware, complete with a few viruses as well. It started installing links on my desktop, making everything run like molasses, it corrupted my Internet Explorer as well as my Firefox, it screwed up my internet connection, and generally made a huge mess. I've been trying to get it off my computer for three days now, and though not everything has been eradicated yet, I expect to be in the clear by the end of the day tomorrow.

These are the tools I used to take care of these problems. If you don't have these or something like them on your system, I highly recommend that you install these on your hard drive as soon as possible:

Two ways to tell whether you've got spyware:

The best way to find out for sure is through your Task Manager:

Several states as well as the US Congress and also the UK have passed or are in the process of passing laws that fine companies severely for sending out spyware. The fines are enormous -- in some cases, in the millions. I now understand why these huge fines are called for. Because it took me three days to deal with this problem! And it's not advertising, it's a crime against sanity!

The Apple Lady will have regained her composure in a day or two.

Labels: around the house, computers

During the trip I mentioned in the previous entry, we passed signs for the Cumberland Gap. There was some debate among us in the car about where this is, exactly, and what mountain range it cuts through.

The Cumberland Gap indicated with the red star is actually a gap between mountains (a map showing the Gap's gap-itude is available here). As you can see, the Gap is in Tennessee, right near the northern border with Virginia and the northeast border with Kentucky.

At the border of Tennessee, the highway US25E becomes a tunnel that drives through the mountain pass.
Due to the enormity of technical difficulties I am currently experiencing, which has made composing this brief entry the work of about four hours, I'm going to stop here for now. More later when I get this crap fixed.

Sources
Virginia Places, Dr. Thomas Walker
Cumberland Gap National Park
Posted by the apple lady at 12:27 AM No comments: Links to this post

I just got back from a trip which involved driving through Kentucky. During this drive, I saw entire hillsides covered with a grayish mat of stuff. There was nothing living on these hills, just the gray, almost ashlike junk. Somebody else in the car said, "That's kudzu. It's killing everything in the South."

And then I saw that the gray stuff was vines, dead maybe from the winter, tangled and matted over everything, reaching up into trees until the trees had been choked to death, crawling along telephone wires until the wires were weighed down to the ground, just completely smothering everything. It looked similar to pictures I've seen of the devastation after a volcano: everything covered and destroyed by thick gray stuff.

The good news is, people have found some ways to control kudzu:

I just learned today that Barry Manilow was behind a ton of songs for commercials back in the day. As the composer or the voice of so many songs that filled my childhood years, he is therefore the one forming many of my impressions about the way the world works. Asking yourself why the world is the way it is today? Maybe the answer is Barry Manilow.

Oh, by the way, his real name is Barry Allen Pincus.

Posted by the apple lady at 11:54 PM No comments: Links to this post

STORK BITES or, the red patches on the back of a lot of people's necks

The other day, somebody bent down to get something off the floor for me, and I noticed she had one of those birthmarks that a lot of people have -- a red or sometimes pink, longish, irregular patch at the nape of the neck that looks kind of like a rash. Usually you can't see it because it's hidden by hair, but with some people, it's pretty apparent.

I heard, once upon a time from some crazy people in a hair salon, that this was not a birthmark but actually a sign that many toxins had built up under your scalp. So I finally decided to find out if this is true.

As a general observation, I've found this to be true of a lot of medical knowledge. They can tell you a lot about where and when something weird occurs in the human body, and sometimes even how it all works. But most of the time, they have no idea why it happens. Somebody really ought to get on the why part.

Posted by the apple lady at 12:15 AM No comments: Links to this post

For those who don't know, the Pixies was a four-person band in the late 1980s and early 1990s which is often credited with laying the foundations for what we now call "indie rock." They mixed punk and pop and surf rock with a sprinkling of Spanish and came up with inventive, catchy, and crazy songs. As many music reviewers have put it, it's hard to imagine Nirvana without them. Nirvana the band, that is.

I don't know what I expected to find when I started this, but I thought I'd see something that would explain where those crazy-great songs came from. These people are not insane like David Lee Roth, they're not messed up like The Replacements. It looks like they're pretty much normal people who made fantastic songs.

People have asked me, "What about the heroin? Isn't Kim on heroin?" As far as I can tell, based on interviews and public documents (it's hard to know for sure what people do in their private lives) the answer is no, that is not her, that's her sister, Kelley.

Kelley was sentenced to mandatory rehabilitation for heroin use. This was after the Breeders' big hit album, Last Splash, and its subsequent tour. She did her time in rehab and came out clean, and this was why the next album, Title TK, was delayed for so long. Unfortunately, based on what I saw at a Breeders show after that album was released, it looked like Kelley didn't really have it together yet.

Kim gets ticked when people get her and Kelley mixed up. I'm not going to reproduce what she said in an interview about this because it includes many swear words, but the short version is, "I hate that!"

She also said, "If something ever goes wrong with Kelley again, everything stops until we fix it."

So, getting back to the original point, heroin was not a factor in the weirdness of the Pixies. The weirdest thing I know about Kim is that she uses black shoe polish to dye her hair black. She says that regular hair dye doesn't get it black enough to suit her. So it looks like the thrilling weirdness of their songs just comes straight from the personalities they were born with.

Posted by the apple lady at 1:38 PM 3 comments: Links to this post

Here's the burning question: where did the alphabet song come from?

I thought maybe Sesame Street, but it's way older than that.

All these years and I never noticed those songs were the same.

Sources
The Straight Dope, "Who wrote the melody to the alphabet song?"
Answers.com entry on the Alphabet Song (references Wikipedia)
Sheetmusicplus.com, Mozart variations

Posted by the apple lady at 2:12 AM No comments: Links to this post

Somebody told me today that V.C. Andrews, the woman who wrote THE gothic-horror novels about super-sick-messed-up families, died years ago. And all the novels that have been coming out under her name for the past however many years have actually been written by her family. Could this be true?

Yes. It is true. And apparently it has been old news for some time.

And was her own family the model for the lurid nastiness in her novels?


All the sources I checked say that except for the debilitating fall she suffered, her childhood was a happy one. She was interviewed as saying she writes about fears that people develop as children, fears of being helpless, trapped, or out of control. One source of inspiration for her novels may have come from the fact that after she was relegated to a wheelchair, her protective mother tried to keep her indoors so that she would not be injured further.

Posted by the apple lady at 1:08 AM No comments: Links to this post