It has finally turned humid this summer.  For weeks and weeks, the weather has been beautiful -- sunny, breezy, warm, and none of that oppressive humidity.  But a few days ago, we had a big fat thunderstorm, and it left a lot of that humidity behind.  Looks like it won't budge for the whole week, either.

Which makes me think, we have finally entered the Dog Days of Summer.

What does that mean, anyway?  I have always imaged it means this: 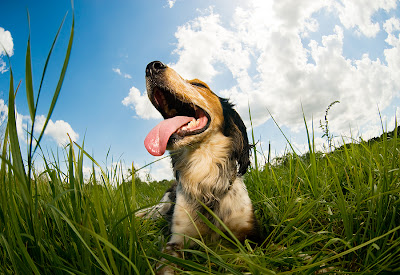 (Photo by Snowlight at Flickr, sourced from Low Country Dog)

(Photo from The Pet Wiki)


The Dog Days of Summer: when the weather gets so hot, all the dogs are panting.

But no, that is not the correct definition.

Sirius is the brightest star in the constellation Canis Major (Bigger Dog). It's just below Orion -- the 3 stars of Orion's belt point to it.  The story goes that Canis Major is Orion's hunting dog.
(Image from Space.com)

Sirius is larger and brighter and hotter than our sun -- though it's too far away for us to feel its heat.
(Image from Astro Bob)

Sources
Columbia Encyclopedia via Factmonster, Dog Days of Summer
The Weather Channel, Why Are They Called the "Dog Days" of Summer?
Farmer's Almanac, Weather Wisdom for August: Dog Days of Summer
Theweatherprediction.com, What Are the Dog Days of Summer?
The Sacramento Bee, Pet Connection: Do you know the story behind 'dog days of summer'? August 23, 2014
Space.com, Doorstep Astronomy: Sirius Gets Serious and Sirius: Brightest Star in Earth's Night Sky
Posted by the apple lady at 1:50 AM No comments: Links to this post

I have had a request!  Daily Apple reader Jamarcus wants to know, what do all those signs next to airport runways mean?  You know, the ones that look something like this:

This sign lights up so it will be visible to pilots at night. But what do the letters and numbers mean?
(Photo and sign from Astronics Corporation)


A very good question.  Something I have often wondered myself.

Before you can interpret the signs, it helps to know how things get named at airports. 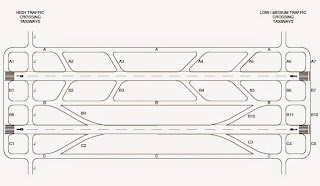 Well, this is hard to see. But the runways have the dashed lines, and the taxiways are thinner.  The taxiways are named, from top to bottom, A, B, and C, and the little connectors that go between the runways and the taxiways are named, from left to right, A1, A2, A3, A4, A5, A6, and A7, and then in similar fashion for the connectors that go off taxiways B and C.  The little taxiway that goes vertically, bisecting the runways and the parallel taxiways, is named J.  That one gets its own letter, as opposed to something like C5, because that's a high-traffic taxiway.
(Diagram from the FAA's Engineering Brief on Taxiway Nomenclature)

This isn't a real-life runway but a screen shot from a simulator, but it does the job for our purposes.  The runway is on the right, as indicated by the white markings. The taxiway, outlined in yellow, is on the left.  A taxiway stub connects the two.  The colored paint and types of markings is a whole other set of visual indicators for pilots.
(Photo from SimFlight)

This is what a CLOSED, or NO-ENTRY sign should look like. Either this or a gigantic X. Big and obvious. No subtlety.
(Image from the Aircraft Owners and Pilots Association)

(Image from the Aircraft Owners and Pilots Association)

(Image from the Aircraft Owners and Pilots Association)


Sources
FAA, Airport Marking Aids and Signs
FAA Engineering Brief No. 89, Taxiway Nomenclature Convention
Jim Sweeney, The Short Course: Airport Signs
Aircraft Owners and Pilots Association, Airport Signs and Markings
Nevada DOT, AOPA's Airports Signage & Markings (this uses the terms runways and taxiways interchangeably, which is very confusing)
AOPA's runway flash cards
Bangalore Aviation, Airport runways: All you wanted to know but were afraid to ask
Sploid on Gizmodo, This is what all the signs and symbols at the airport runway mean
Alpha Bravo Charlie.info
Posted by the apple lady at 2:26 AM 1 comment: Links to this post

This weekend at the state fair, I got a henna tattoo. 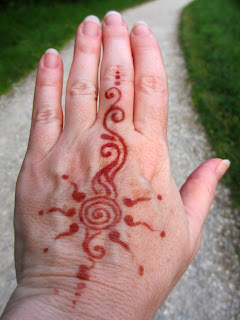 I went for a simple $8 design of a sun. The tattoo artist offered to extend it so it goes up my finger. I said OK by me.
(Photo by the Apple Lady)

The henna plant is a pretty non-descript looking shrub.
(Photo from Sailu's Kitchen)

Traditional bridal mehndi -- henna tattoo on the hands & wrists prior to a marriage, here, on a bride from India.
(Photo from Sameera Threading)

Why it's Usually Brown, and Why on the Hands & Feet

This henna tattoo starts on the fingers, descends down the palm, and onto the wrist. You can see how the tattoo is darker on the fingers and palm than it is on the wrist. This is because the skin on the wrist is thinner and doesn't take up the stain as well as on the hand.
(Photo from Ohio Body Art)


What It's Made of

This applicator is like what my henna tattoo artist used.  Most of the applicator is a slender metal cone which tapers to a fine point with a hole in the end. At the top end of the applicator is essentially a plastic bag containing the henna paste. The artist squeezes the bag which makes the paste come out the tiny little hole at the bottom. The artist moves the applicator while squeezing out the paste. Often the artist makes very detailed designs and fine lines. I was pretty impressed with the delicacy of the skill.
(Photo from ehow)

This is another type of henna applicator. Here, instead of a little plastic bag, the receptacle that holds the paste is a plastic bottle.  The tip of the bottle is the very fine tube with a tiny hole at the end through which the henna paste emerges as it is squeezed out and applied to the skin.
(Photo from Wikimedia Commons)

Henna paste being applied. Here you can see how it sits on top of the skin.
(Photo from White Ink Tattoo Center)

Process of a henna tattoo, from paste to no-paste to additional darkening.
(Image from New World Henna) This is what the paste looks like as it's drying & flaking off -- kind of crusty.
(Photo from Cuded)

Some of the designs can be really elaborate.
(Photo from White Ink Tattoos Center)

Or even more elaborate. This person would have to keep from moving both of her hands for several hours in order for this tattoo to turn out properly.
(Photo from ehow) 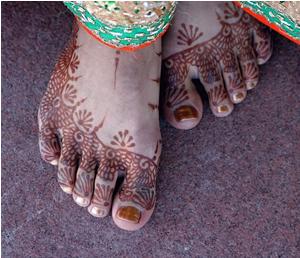 Some pregnant women get henna tattoos on their bellies--I suppose in hopes of giving good luck to their forthcoming babies.
(Photo from Pop Sugar)

This might be a cool idea for someone going through chemo.
(Photo from Best Tattoo Designs Ideas)

You can see that this woman from Kuwait got a really beautiful henna tattoo. Except the henna that was used had PPD in it, and she turned out to be allergic to PPD. So her skin turned red and swelled up every place the black henna was applied.
(Photo from Evans et al., New England Journal of Medicine)


Now I'll show you some more pictures of regular henna tattoos because there are a lot of really magnificent ones. 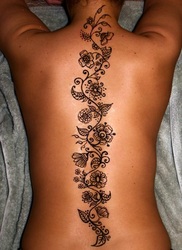 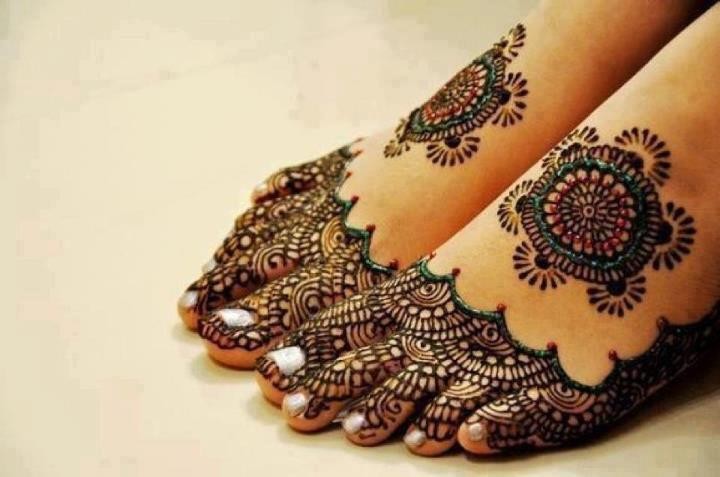 I think this one wins the prize. This is a wedding henna tattoo, complete with all sorts of colors, glitter, and body art gems.
(Photo from Crafty Nitti)

Posted by the apple lady at 2:28 AM No comments: Links to this post