In keeping with my previous entry whose subject was inspired by a book I was reading, I thought I'd investigate another topic similarly inspired. I've been reading Moby-Dick. Slowly, about three pages a day, since October. If I had to read many more pages at a time, I'd have given it up long ago. But I'm determined to make my way through it for once. 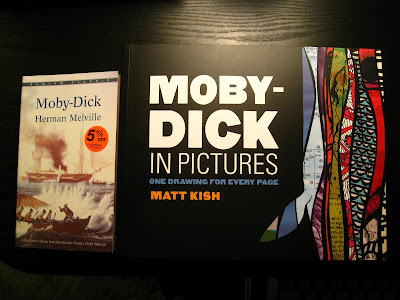 Actually, I know I'd never have made it this far without the aid of Matt Kish's book of illustrations (pictured above right). I read about three or four pages of the novel at a time and then reward myself by looking at the illustrations that correspond with the pages I've read. My copy of Moby-Dick (above left) is not the edition he used when he drew his illustrations so the pagination is slightly off. But the difference is negligible. I happen to know Matt from my bookstore days, but even if I didn't I would still recommend his book of illustrations as an invaluable aid in reading the original.
(Photo by the Apple Lady)


I recently read the chapter about ambergris. It's such a mysterious substance, and I have to admit, I didn't quite believe Ishmael's explanation or description of it. So I thought I'd find out for myself.

I don't think Ishmael would take this amiss. In fact, I think that looking up the information outside of the narrative would be perfectly in keeping with the book.

Anyway, here are a few facts about ambergris: 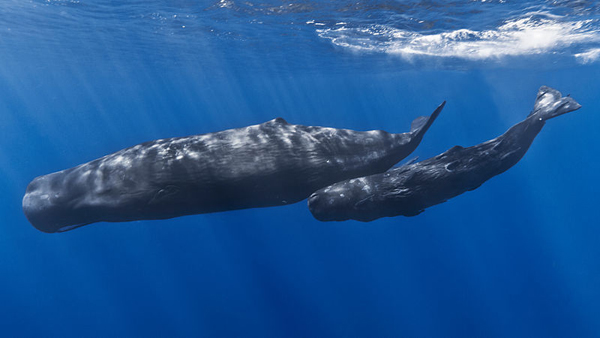 This is a sperm whale mother and her calf. Sperm whales are named for the material in their huge skulls called spermaceti, which is a gooey substance when wet and waxy when dry. Scientists still aren't sure what it's for, but they suspect it helps the whales retain their buoyancy.
(Photo from Amazon AWS)

Males can grow to be 50 meters long and weigh 50 tons. This diagram gives you a good idea of the size of a sperm whale.
(Illustration from National Geographic)

The beak of a giant squid, up close. The beak functions as the squid's jaws and mouth, the thing it uses to clamp down on its prey. The beak of a colossal squid is about the size of a man's hand.
(Photo from Te Papa's Blog)

This fellow is showing the location of a squid's beak. This is not a giant squid but a Humboldt squid, but it keeps its beak in the same place.
(Photo from KATU News)

What black ambergris looks like. This ambergris washed up on shore around or near New Zealand. Looks a lot like regular stones, doesn't it?
(Photo from ambergris.co.nz)

A few years ago now, this woman found a huge lump of ambergris on South Australia. Ambergris is pretty light-weight for its size, but this hunk is so large, it weighed 15 kg. Its value was estimated somewhere around $300,000.
(Photo from Laputan Logic, original source unknown)


[imagine a photo of a small bottle of ambergris here]
Small bottle of a tincture of ambergris. "Tincture" means it's been dissolved in alcohol. The liquid is a pale gold color. The person who made this says she uses only beach-found ambergris. She sells her ambergris tincture for $85 per 10 ml bottle.
(I would link to the photo but she says her entire site is copyrighted and she doesn't want anyone to use anything whatsoever from her site. So you'll have to go to her site if you want to see what an ambergris tincture looks like.) 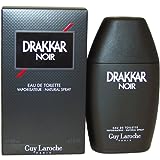 Drakkar Noir: a whale of a cologne? Har har har!
(Photo and cologne available from Amazon)

"Dropping his spade, [Stubb] thrust both hands in[to the dead sperm whale's stomach], and drew out handfuls of something that looked like ripe Windsor soap, or rich mottled old cheese; very unctuous and savory withal. You might easily dent it with your thumb; it is of a hue between yellow and ash color. And this, good friends, is ambergris, woth a gold guinea an ounce to any druggist.
. . .
"Though the word ambergris is but the French compoud for grey amber, yet the two substances are quite distinct. For amber, though at times found on the sea-coast, is also dug up in some far inland soils, whereas ambergris is never found except upon the sea. . . . ambergris is soft, waxy, and so highly fragrant and spicy, that it is largely used in perfumery, in pastiles, precious candles, hair-powders, and pomatum. The Turks use it in cooking. . . . Some wine merchants drop a few grains into claret, to flavor it.
. . .
"By some, ambergris is supposed to be the cause, and by others the effect, of the dyspepsia in the whale. . . . I have forgotten to say that there were found in this ambergris, certain hard, round, bony plates, which at first Stubb thought might be sailors' trousers buttons; but it afterwards turned out that they were nothing more than pieces of small squid bones embalmed in that matter."

I'm reading the Hunger Games trilogy.  At the moment, I'm in the second book.  At one point Katniss said she covered her tracks, literally did something to obscure her footprints so that anyone trying to follow where she walked would have trouble finding her.  This reminded me that, ever since I was a teenager and read such things in books, I have wanted to know, how exactly do you cover your tracks?

If this guy really wanted to, could he hide or disguise his tracks in the woods well enough that someone wouldn't be able to follow him?
(Photo from Just This)


I walk in the woods a lot.  I've also walked on a lot of sandy beaches and snowy roads, and I've realized, it's got to be dang hard to make all evidence that you've just walked past completely disappear.  Yet in so many books and movies, the heroes seem to be especially expert at it, and they are able to foil the bad guys who are trying to catch them.  What do they know that I don't? 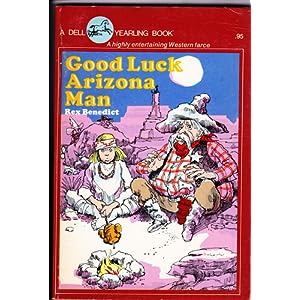 I absolutely loved this book when I was a kid.  Good Luck Arizona Man is about a white boy who grew up with a bunch of Apaches and gets curious about how he came to be there.  There's all sorts of tracking and following and disguising of tracks in this book. And there's a horse race. And gold.
(Photo and book available through Amazon, though it's a collector's item now and sells for $30)

These tracks were made by a grizzly bear, but you can see how the grass gets smashed down with each step. Not so different when people walk through grassy areas.
(Photo from the Grizzly Bear Blog) 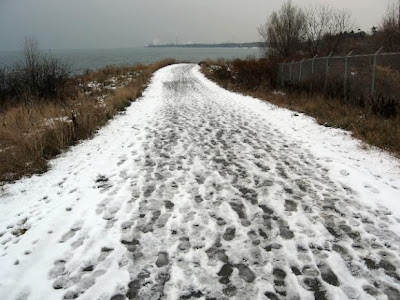 One option is to hide your tracks among lots of other footprints like these pictured here.  Hide yourself among the crowd, so to speak.
(Photo from the Snapshot Travel Blog)

You might think you wouldn't leave footprints on hard, smooth surfaces like asphalt or linoleum or wooden floors.  But there's still the potential to leave "transfer prints" like these.
(Photo from Katie Rowland's World Race)


DON'T WALK ON SURFACES AT ALL

If you can manage to cross from one tree to the next and the next, you won't leave many tracks at all.  It can't be that hard. Squirrels do it all the time.
(Photo from Public Domain Photos)


Well, none of these suggestions is fool-proof.  I'm sort of disappointed that there isn't some special tracks-covering secret that's been lurking out there all these years.  But on the other hand, I'm glad to know I wasn't wrong in thinking that it's hard to cover one's tracks--and as it turns out, a lot more difficult than books and movies would have you believe.

And this is just the visual stuff.  I didn't even touch on the whole problem of disguising your scent.

Way back before Christmas, I was watching a documentary about elephants.  The elephants were walking along in their slow, rhythmic way, and I was noticing their feet.  When they stepped on the ground, their feet seemed to squash outward, like there was a cushion built in there.  Of course an elephant's feet have to support a lot of weight, so I thought maybe they're built in some special way that gives them extra support. The more I thought about it, the more I wanted to know, how is an elephant's foot put together.

Here is a brief video of an elephant walking to show you a little bit of what I was looking at. Watch the back feet of this young elephant to see most clearly how the feet sort of squash outward with each step. This is what the bones of an Asian elephant's back foot look like. If you put your hand tent-like on a table so that only the tips of your fingers touched the table, you'd have a good representation in front of you.
(Photo from Elephants Encyclopedia) This diagram shows the position of the bones within an elephant's foot. The gray shaded area represents where the cushion of fatty tissue and cartilage supports the bones.  To see a full-color artistic depiction of the same idea, check out Margaret Meintjes' print (she won't allow any reproduction of her image whatsoever or I'd show it to you here)
(Diagram from The structure of the cushions in the feet of African elephants, Weissengruber et al., Journal of Anatomy, December 2006)


Here is a whole family of elephants walking past the jeep of the person taking the video. The noise of the wind blowing is louder than the footsteps of the elephants. (By the way, that's Serengeti.)

The bottom of a healthy elephant's foot. Tracts like these that are clean and distinct help an elephant to maintain traction on slippery ground. And yes, this is the photo from my latest teaser.
(Photo from The Elephant Sanctuary in Tennessee)

This is how an elephant gets a pedicure -- with an iron rasp.
(Photo from the Elephant Encyclopedia)


These keepers at the Dublin Zoo are doing it the way you're supposed to:  give the elephant a bath first, then trim the toenails and, yes, trim the bottom of the foot too.  Trimming keeps the tracts clean and healthy.


OK, one last video. This shows Raja (pronounced Rai-ya) getting her nails filed. I don't think the keeper has washed her feet first so this is probably not the best way to do it. But what I like about this video is how Raja keeps sneaking her trunk out through the bars, trying to get more of those carrots.

I know I promised you the answer to the latest teaser, but I didn't leave myself enough time to do the full Apple. I'm leaving tomorrow at the crack of ouch for Seattle for several days. So I'll give you a few quick facts about Seattle before I go. Answer to the teaser when I get back. 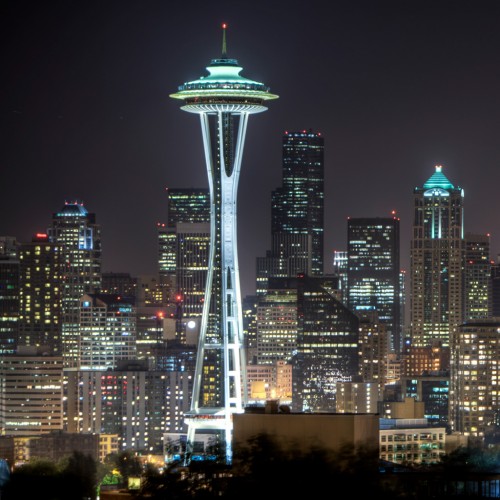