Someone might be celebrating a birthday on this date.

I tried to find information about when people started celebrating birthdays in the way we do today, but I haven't been able to find much that's specific. Probably because birthdays are another one of those cultural things that now everybody does, and nobody paid much attention as it slowly became pervasive.

What I've found, generally, is it wasn't until pretty recently -- probably the early 1900's -- when regular people started celebrating their birthdays. Until then, kings and queens, pharaohs, dignitaries, the people with money and power got to have birthdays.

I would bet that children started to get presents for their birthdays only after child labor laws were passed during the Industrial Revolution. (In the US, those laws really started to take hold in the 1910's and 1920's.)

Sources
www.historyorb.com, Famous Birthdays
Any Day in History, June 29 birthdays
Infoplease Almanad, Today's birthday
World Almanac for Kids, Historical Birthdays for June
Waterboro, Maine Public Library, June literary birthdays
photo of Gopher from "Why don't you dance with me -- I'm not limburger!"
Posted by the apple lady at 12:56 AM No comments: Links to this post

Preparing to leave for a trip, I have just a few tidbits for you:
DACHSHUNDS

Okay, after that, take a look at these pictures:

Source
dictionary.laborlawtalk.com, Definition of Detroit
Posted by the apple lady at 2:33 AM No comments: Links to this post

Last night there was a full moon, and it looked orange. I asked the person standing next to me if he knew why the moon was orange. He thought a minute, and said no, he didn't. Maybe, he said, pointing to the orange shirt he was wearing, it was because of his shirt?

This reference to the Harvest Moon reminds me, I've always liked the fact that each month's full moon has a different name, but I can never remember what they are, and I'd also like to know why they are so named. As it turns out, most of the names come from Native American tribes and refer to weather, growing, or hunting conditions at the time of the full moon.
One moon fact I never really thought about before: though the time of the full moon's appearance may differ, everyone in the world will see the same full moon on the same evening.

Sources
Keith Cooley, Keith's Moon Page, "The Orange Moon" This is an extremely cool site, by the way. You can see what the phase of the moon was on any day of the year going back to 1800. You can find out what your weight would be on the moon. Find out when the next blue moon will be. Learn about eclipses, moon landings, the tides, and how the moon determines when Easter falls.

Farmer's Almanac, Full Moon Names and Their Meanings
Posted by the apple lady at 12:16 AM No comments: Links to this post

There's a Long John Silver's near my house. I don't like fish very much, and especially not fried fish, but often when I drive by, I wonder, "What the heck is a hush puppy?"

The hush puppies are the little round fried things on the left, between the dishes of cole slaw
(You can order this from Skippers)

This is Jason, the basset hound that became the mascot for Hush Puppies brand shoes

Posted by the apple lady at 7:09 PM No comments: Links to this post

I was going to add on to the previous entry, but I've found enough other interesting facts from the book I purchased that it seemed an additional entry is in order.

Crying: A Natural and Cultural History of Tears
by Tom Lutz


To recap, my question was, why when we feel sad or otherwise extremely emotional, is it our body's response to cry? Why not some other physiological response, such as sneezing, for example, or hiccuping? In reading a book by Tom Lutz called Crying: A Natural and Cultural History of Tears, I came across several interesting facts about tears, but not the answer to my question. But tonight, I found the passage where he addresses my question.
Source
Tom Lutz, Crying: A Natural and Cultural History of Tears, W.W. Norton & Company, 1999
Posted by the apple lady at 1:14 AM No comments: Links to this post

Every once in a while it occurs to me to wonder, why when we feel sad, is it important to our bodies to cry? That is, what physiological good do tears do? How come our bodies make tears in response to sorrow, instead of something else, like tingling hands or sneezing or something like that? I wasn't sure I'd find an answer to this, but then today, lo and behold, I spotted a book called Crying: A Natural and Cultural History of Tears, by Tom Lutz. In it is a chapter on the biology of tears. Reading it, I am amazed and thrilled by what I'm learning.

Crying: A Natural and Cultural History of Tears
by Tom Lutz

Obviously, there's a lot more in this book than I've paraphrased here. I'm still reading through the chapter (currently, he's discussing which comes first, emotions or the physical response. If you think about it, it's not always absolutely certain which triggers which.). I'm hoping to find what benefit emotional tears give to your body. As soon as I discover the answer -- and it may be that the answer is "nobody knows yet" -- I will report it to you here. So don't cry, I'll be back!

Source
Tom Lutz, Crying: A Natural and Cultural History of Tears, W.W. Norton & Company, 1999
Posted by the apple lady at 1:59 AM No comments: Links to this post

Starting this month, the Newport Aquarium in Newport, Kentucky will open its shark ray exhibit -- the only shark ray on display in the Western Hemisphere.

This shark ray looks a lot like the one at the Newport Aquarium
Photo from the Underwater Times
Sources
Newport Aquarium press release, "First shark ray in America tests the water at Newport Aquarium," June 8, 2005
Australian Museum Fish Site, Find a Fish, Shark Ray
American Museum of Natural History, Seminars on Science, "Sharks and Rays: Myth and Reality," Week 4, Nostrils of Shark Ray
Shark Ray Jaw, FossilsOnline.com
Posted by the apple lady at 11:13 PM No comments: Links to this post

Today, a friend told me this: "Did you know that pastrami is a process? And that any meat can be pastramied?" I HAD to know more. That's pastrami on the right, brisket on the left. Pastrami has the tell-tale blackened spices on the outside.
(Photo from Off the Broiler) This is short ribs that has been pastramied. Or, pastrami made with short ribs.

(Photo and recipe from inuyaki)

Sources
Howstuffworks, "What exactly is pastrami?"
Ask Yahoo, "What is pastrami?"
About.com, Derrick Riches, "Pastrami: Yes, you can make your own at home."

Posted by the apple lady at 10:57 PM No comments: Links to this post

The other morning, I saw a male mallard duck sitting in a parking lot, in an empty parking space. I pulled up near it, to the space where I wanted to park, and the duck did not move. He eyed my car with some suspicion, but he did not even stand up. I thought he might have been hurt, or perhaps just holding the parking space for someone, but after quacking softly to himself for a while, eventually he stood up, flip-flapped his duck feet a ways away from me, and then took off, flying high over the buildings.

These ducks are from Fergus Falls, Minnesota

These ducks are from Scotland

Here are some mallards in downtown Branson, Missouri


Sources
Ducks of the World, page by Maurice Houston Field, Curator of the Waterfowl and Chenoa, University of Tennessee
BBC Science & Nature Wildfacts pages, the Mallard
Chuck Fergus, Pennsylvania Game Commission, Mallard Ducks
Ducks Unlimited Canada, The Life Story of the Mallard
Christyan's page on the Mallard Duck, Warner Elementary School
Posted by the apple lady at 1:19 AM No comments: Links to this post

I got a sliver in my palm, and somebody suggested I soak my hand in warm water and Epsom salts. I haven't seen Epsom salts much at all in recent years. In fact, the last time I really remember seeing them in action was when my brother once upon a time stepped on a rusty nail while crossing a baseball diamond barefoot, and the nail went just about through his foot. Afterwards, he soaked his foot in a big pan of milky-looking water while my mom quietly had a conniption fit in the background.

Anyway, the recent mention of Epsom salts got me wondering, what are they exactly?

Epsom salts from the drug store

So, that sliver I had in my palm? I got some salts, dissolved them in warm water, and soaked my hand until the water turned cool. The sliver hadn't moved a bit. So much for drawing out splinters, or even softening the skin enough that the splinter would be easily accessible.

I got it out the best way I know, poking the skin away very carefully with a needle, until I could push it out with the needle's tip. Then I poured hydrogen peroxide on the spot. Done.

Sources
Ask Yahoo, What are the medicinal benefits of soaking in epsom salts?
Care2.com, 13 Wonderful Ways to Use Epsom Salts
Drugs.com, Epsom salts drug information
CureZone, What are Epsom salts?
1911 Love to Know Encyclopedia, Epsom salts
There's also the Epsom Salt Industry Council, but this website didn't work when I checked it.
Posted by the apple lady at 11:46 PM 1 comment: Links to this post

I've recently been eating these more often, when I get up too late in the morning to have a real breakfast, so I make a PB&J because it's quick, and eat it in the car on the way to work. I'm struck anew, how tasty this combination is, and how filling. It makes me marvel, "Whoever thought this up was a genius!"

I figured that I wouldn't be able to find the name of one particular person who made the first Pt. But. & Jel. a reality. But what I didn't count on was realizing just how many other inventions had to come first, in order for the PB&J to come into being. 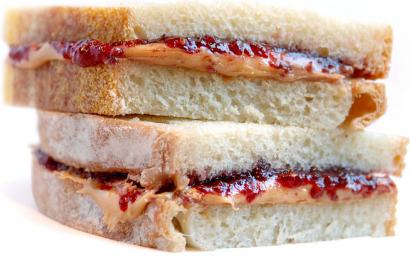 (Photo of PB&J sandwich from boston.com)

I'm just now realizing how mysterious the PB&J actually is. Nobody knows, really, who made the first ever sandwich. Where was the first jelly made, no one knows that either, let alone who was its first architect. And what was the name of the doctor who came up with the idea of peanut butter? And could the US Department of Defense be behind the first peanut butter and jelly sandwich, or did they have some other mind working for them behind the scenes? No one can say for sure...

And remember the Amazing Mumford, who used to be on Sesame Street and whose magic phrase used to be, "A la peanut butter sandwiches?" He seems to have gotten mysteriously squeezed out by the Count von Count, who used to laugh "Ah! Ah! Ah!" when he finished counting something. He no longer does this because the People in Charge at Sesame Street thought this made him too scary for today's children -- or was it because he had triumphed over Mumford and no longer needed to celebrate his victory?

Sources
Smuckers, The History of Peanut Butter and Jelly
Suman Bandrapalli, "How a PB&J Came to Be," Christian Science Monitor, March 3, 1998
"What is the history of the peanut butter and jelly sandwich?" Ask Yahoo
Posted by the apple lady at 2:08 AM 1 comment: Links to this post