My apartment lacks a bathtub. I've got a shower, no bathtub. On cold, blustery nights when I'm tired or achy or just want to have a nice warm soak, I long for a bathtub.

So I'm going to ruminate about bathtubs.

Look, she's saying, "What would I do if I didn't have a bathtub? Oh, I'd be bereft."
(Photo from Home improvement blog) 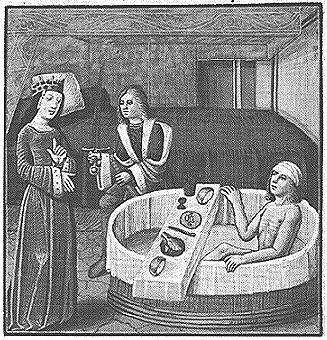 Here, one of the titled lords of the house is having a bath -- they had a receptacle brought into their bedchambers -- and he's having food brought to him as he bathes. Now there's an idea.
(Photo from the Clawfoot Bathtub Warehouse)

This is a contemporary drawing, I know, but it's the best image I could find that showed how those hip baths were used.
(Photo linked to from Discworld and Pratchett Paraphernalia) 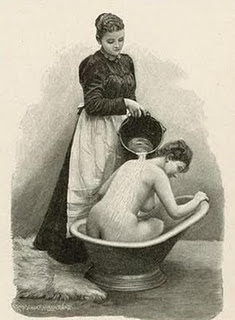 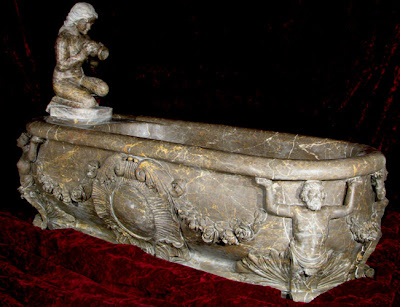 I don't know when this brown marble bathtub was made. I suspect perhaps it's Italian, 19th century? Or maybe it's older than that. The lady at the top of the tub is holding some kind of ewer which is actually a spout from which the running water would have emerged. So this marble tub would have been connected to pipes of running water.
(Photo from About Chinese Antique) 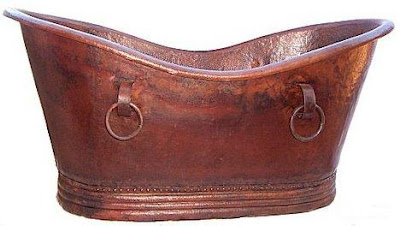 English roll-top copper tub, popular from around 1890-1930. The handles on the side made for easy carrying. These were available in a wide range of sizes, anywhere from 4 feet long to 7 feet long. You could also have them painted in a color of your choice.
(from Meryl's Short History of Antique Bathtubs) 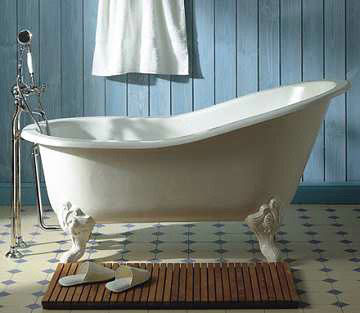 Clawfoot bathtubs are popular again now, so I had trouble finding an period image of one. Here, the feet are painted to match the tub. More often, the feet on the early clawfoot tubs were made of iron, and the tub itself was made of tin.
(Photo from Elle Fowler's blog) 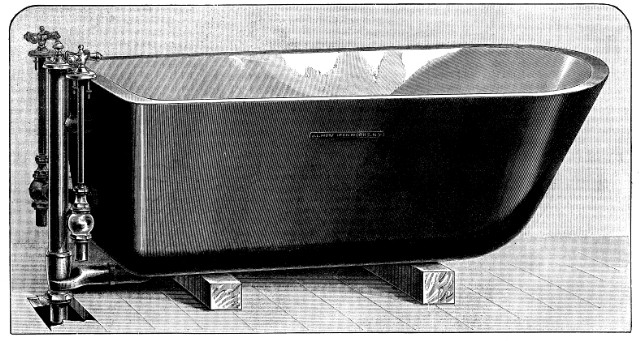 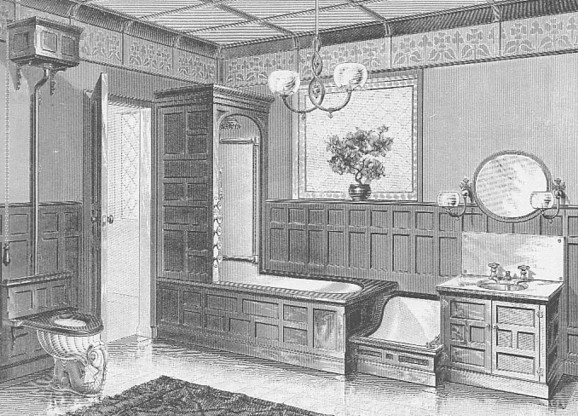 What could be in this cabinet?

Why, of course! It's a fold-out bathtub! Manufactured by the Mosley Folding Bath Tub Company in Chicago in the 1880s, this bath system features an onboard ten-gallon copper water tank, which is heated by a kerosene burner. The tub is 76 inches long and 25 inches deep. The original advertisement boasts that this tub is "available at a moment's notice."
(Photo from Tiny House Blog)

This is a clawfoot tub from 1899 coated in porcelain enamel.
(Image from Victoriana Magazine)

Bathroom suite in Spring Green sold by Kohler in their 1939 catalog. Note the separate, small dental sink.
(Photo from Rejuvenation Archives via This Old House) H. L. Mencken, American literary critic who made no secret of his annoyance with "American sham, pretension, provincialism, and prudery."
(Photo from Helian Unbound)

This solid copper bathtub looks like a free-standing antique, but it's recently made and considered very luxurious. It's 65 inches long, can hold 71 gallons of water, and when empty, weighs 154 pounds. I don't know what they do about the corrosion situation, but it's probably something clever and expensive.
(Photo from Eastern Refinishing) Sunken whirlpool tub. I'd be too worried about splashing and getting water all over the floor. I guess you wouldn't have to fill it all the way to the top.
(Photo from Modern House Designs) 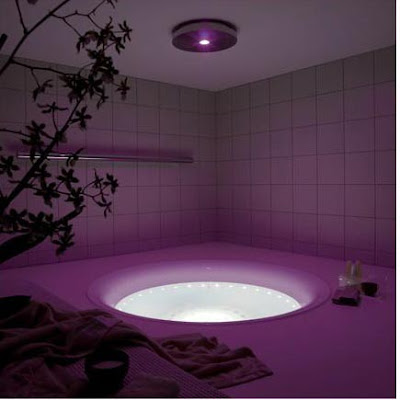 Illuminated bathtubs are a fairly new species on the scene. I'd like to get in this one and try it out.
(Photo from Mix Possessions)

Ovoid-shaped, for the nesting sort.
(Photo from Home Design Gallery)

If you're really into shapely tubs, perhaps you'd like the shoe-shaped tub. No joke. This is the Audrey tub, available in three styles, all with similar mosaic on the outside, from Mosaic artists in Italy.
(Photo from Homedit) 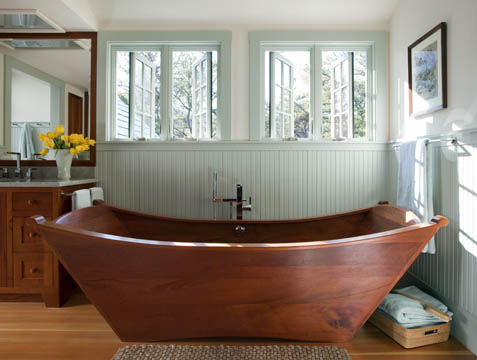 Or maybe you're more traditional, and you prefer the wooden bathtub. These are made to order by hand in Maine.
(Photo from Bath in Wood of Maine)

These are called Kali'-Art bathtubs. The sites that talk about these tubs don't explain that phrase, but they do say these tubs have acrylic interiors and wood exteriors (this one is oak) with leather finishing on the corners. The headrests -- the things that interest me the most -- are optional extras. These bathtubs cost between $7,400 and $13,400.
(Photo from Trendir)

In my super dream luxury home, this is the bathtub I'd choose, mainly because of that fireplace right next to it. The room looks warm and cozy, yet the tub looks long enough for stretching out. Yum.
(Photo from Home Design Gallery)


Sources
Old House Journal, Coming Clean: The History of the Bathtub
About Chinese Antique, A Short History of Antique Bathtubs
ClawfootTubs.com, Clawfoot Tub History
Clawfoot Bathtub Warehouse, History of Bathtubs and Some More Things You Might Not Have Known
Professional Bathtub Refinishers Association, The History of Antique Claw Foot Bathtubs
Millard Fillmore's Bathtub
Mental Floss, Notable Bathtubs in History
Posted by the apple lady at 2:59 AM 2 comments: Links to this post

I didn't finish my Daily Apple for tomorrow.  I apologize.  But it is in the works and I should have it done soon. In the meantime, I'll give you a teaser.  See if you can guess what it's about.

Posted by the apple lady at 2:05 AM 3 comments: Links to this post

Apple #559: Getting the Wind Knocked Out of You

A week or so ago, a bunch of friends and I were watching a football game. After one play, one of the players was lying on the field not moving for a few moments. It turned out not to be serious, and we speculated that maybe he'd just had the wind knocked out of him. Then we realized we weren't sure what causes that.

What exactly happens when you get the wind knocked out of you?

Diagram of the diaphragm. This seems the opposite of what you'd expect, but when the diaphragm contracts, the area in your chest enlarges and allows air to rush in. In other words, you inhale. When the diaphragm relaxes, the chest cavity gets smaller, air rushes out, and you exhale.
(Photo from Merck Manuals)


Here's the motion of the diaphragm in a video:


It happens to animals, too. Here, one cat knocks the wind out of the other.

Posted by the apple lady at 9:02 PM 3 comments: Links to this post

This topic seems like bad timing, given the recent news about the Sandusky/Penn State nightmare. But I was asked to find out about how skycams work before that whole story broke, and in spite of my horror and disgust at that news, I discovered over the weekend that I do still like to watch football. Probably many of you out there do too. So I'm going ahead with this.

Specifically, longtime Daily Apple reader Demarcus wanted to know, how does the camera that flies over the football field work? He said at the last football game he attended, he'd noticed wires coming from each of the four corners of the stadium, and that the camera hung from the nexus of those four wires. Beyond that, he couldn't really figure out how it works. The Skycam travels along cables over a football field to provide aerial images of the game in action.
(Photo from Wired)

This video below shows examples of the kinds of shots that are possible with these aerial cameras. In this gane, the camera used is called a SpiderCam.

A Skycam, as of 2006. Inventor Garrett Brown was awarded an Oscar for making this.
(Photo from GizmoWatch)

On the Cablecam, the box with the motor in it is flatter and more rectangular than the Skycam. This Cablecam also has a microphone attached to the bottom of the camera.
(Photo from Sports Video Group) 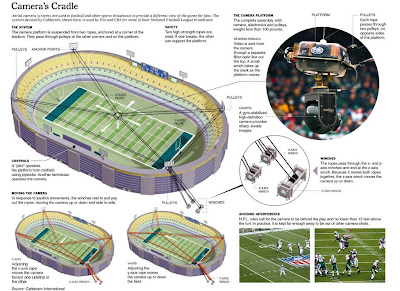 I really wanted to find a diagram of the black box where the camera motor is housed so I could see how those innards work. The best I could find was this schematic from Cablecam, which describes lots of pieces of the system, but in a fairly general way. It's hard to see much of the detail at this size, but you can see it better at this larger size, which especially helps in reading about how the winches and reels work.
(Diagram from Cablecam, hosted at Free Image Hosting)

A reel and winch controlling the cables in a Skycam system.
(Photo from Digital Producer Magazine) 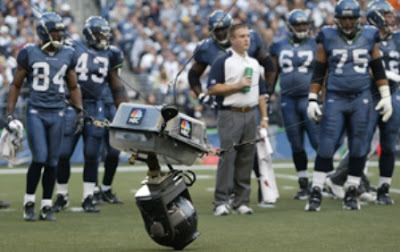 Skycam way too close to the field in this football game in 2007.
(Photo from Awful Announcing)

Photographer Emanuel Schwermer using a cable cam to film a car for a commercial.
(Photo from Emanuel Maximilian Schwermer's site)

Two-page spread detailing all the types of cameras used in a professional football game.

Photo showing how the cables are attached to the roof of a stadium.

How the yellow, superimposed first-down line is done.

I've had a number of requests, which is always very exciting for your Apple Lady. I'm going to take them in turn. Up first is road runners. What do they look like in real life? Do they bear any resemblance at all to the cartoon Road Runner? What are some facts about them, like what do they eat and so on?

Note the blue feathers with a tuft of darker blue feathers on top, the yellow beak, the long plume-like tail, orange legs which are super long, and the characteristic Meep Meep. Any resemblance to the real life roadrunner?

Roadrunner with a snake by the tail
(Photo from Canku Ota)

Real roadrunners go anywhere they please. They do not keep only to the roads.
(Photo from Gardening for Wildlife)


So how did the animators get from the real-life roadrunner to the cartoon blue version? I could not find a satisfactory answer to this. Chalk it up to artistic inspiration, I suppose.

I did discover that

''And we had very strict rules about Road Runner,'' he added, citing the list in his book, which includes the following: (1) The Road Runner cannot harm the Coyote except by going ''beep beep.'' (2) No outside force can harm the Coyote - only his own ineptitude or the failure of the Acme products. (3) No dialogue ever, except ''beep beep.'' (4) The Road Runner must stay on the road; otherwise, logically, he would not be called Road Runner. (5) All materials, tools, weapons or mechanical conveniences must be obtained from the Acme Corporation. (6) The Coyote is always more humiliated than harmed by his failures.

Perhaps Chuck Jones' book would have more information about where his Road Runner came from.

Chuck Amuck: The Life and Times of an Animated Cartoonist

Here's another interesting difference between cartoon Road Runner and the real-life roadrunner. The cartoon bird's chief characteristic is how he eludes capture, while what makes the real-life bird so interesting is the ways in which it captures other animals, especially animals that you would think would be its predators. Cartoon: preyed upon. Real-life: predator.

But they do have one thing in common, which is that they are quite wily. (Yes, as opposed to the coyote, har har.)

Don't forget to set your clocks back one hour tonight!


Daily Apple entry on Daylight Saving Time
Posted by the apple lady at 7:51 PM 1 comment: Links to this post