So I like to watch this show on Bravo, Top Chef. And in one episode, a chef-contestant made tuna tartare. In his evaluation, a judge complained that "everybody" serves tuna tartare, and that it's kind of old hat. He didn't actually use that phrase "old hat," of course, since he is far too cool to use such a dated figure of speech. But he and his fellow judges did generally indicate that they were tired of tuna tartare.

I, for one, have never eaten it, nor have I seen it in person. An example of what tuna tartare can look like.
(Image from Flickr, sourced from My Life as a Reluctant Housewife)


I am compelled to ask, what is "tartare" anyway?

(By the way, I'm back from my trip. It was restful. There was pie and there was football. It was good.)

Various experts disagree about what tartare is exactly.

So, obviously, I had to look a little deeper. I did and I thought I had found the real story, which follows:

The Mongols, a.k.a Tartars, on horseback
Image from A Thousand Years of the Tartars, by E.H. Parker

Steak tartare, with a quail's egg on top, served by the "trendy little bar" in the Museum of Modern Art in NY City
(Photo from We Eat Everything)


But then on digging still further, I found out that whole story about the Mongol tribes/Tartars is a big fat lie.

At this top restaurant, Harris' steakhouse in San Francisco (note the odd fresco behind this table), an appetizer of steak tartare will set you back $12. A steal, compared to the Kobe ribeye, which goes for a princely $75.
(Photo from Top Restaurants)


Regardless of its mysterious history, tuna tartare is raw fish, chopped up or sometimes only sliced. Put in it what you think would taste good. And, contrary to my hopes, the act of chopping or slicing does nothing to reduce the possibility that eating the raw fish might get you sick. 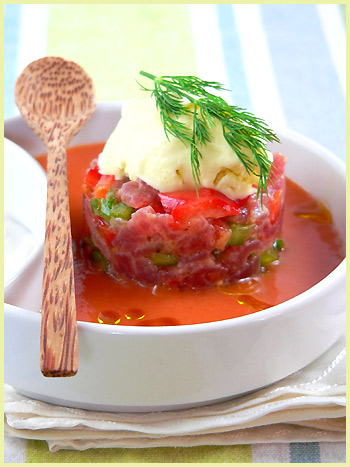 (Photo from Sled Dog Music's blog about music and Winnipeg)


I'm going to be going out of town for a few days for a much-needed trip back to the Apple Lady homeland. Since we just crossed the autumnal equinox (i.e., it's now officially fall), I thought you might enjoy perusing through Daily Apples on these fall-ish topics:

Corduroy (you know, you wear corduroy pants to school)

Zombies from Shaun of the Dead
(Image posted by Reeling Reviews)


Part of the reason I want to do this is that certain zombie movies freak me out completely. Not the body-parts-falling-off kind of zombies, but the ones where you don't really know who's a zombie and who's not. I'm talking mainly about the Invasion of the Body Snatchers remake with Donald Sutherland. That movie scares the crap out of me, largely because I've had nightmares -- far worse than any movie -- that involve hard-to-identify zombies who are taking over people's souls.

My nightmares involve trying really hard not to stand out and thus avoid setting off this type of alarm. Oof, terrible.
(Photo from Invasion of the Body Snatchers 1978
posted by creature from the blog lagoon)


Enough revelations about your Apple Lady's psyche. Let's find out about zombies.

Robert Kirk, now an Emeritus Professor at the University of Nottingham in England, recently published a book about zombies, called Zombies and Consciousness.
(Photo from U of Nottingham)

Enough of the high-level thought about zombies. In the movies, zombies are generally:
Exceptions to these generalities do exist, of course. 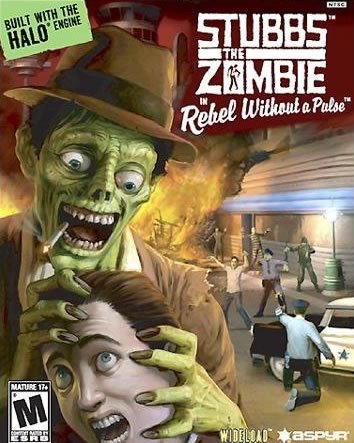 In this game, Stubbs the Zombie in Rebel Without a Pulse, you play the zombie.
(Photo from V's Recommended Games Wiki)


Now here are some notable zombie movies -- notable primarily in the sense that I've seen them, and other people refer to them a lot.

Invasion of the Body Snatchers, 1956

Invasion of the Body Snatchers, 1978

Apparently it's in Evil Dead II that his hand becomes zombified and tries to kill him in increasingly wicked and taunting ways.
(Image from Rifftrax forum)


Pirates of the Caribbean: The Curse of the Black Pearl, 2003

And of course, right now the latest Resident Evil is playing at a movie theater near you. 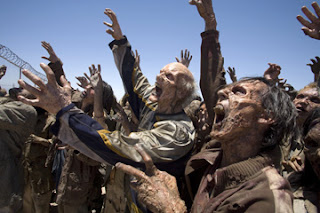 
Movies you wouldn't normally think of as zombie movies but which technically could be include:

Here are some lesser-known zombie movies with titles that I especially enjoy:
By the way, some of these are shorts that can be found on YouTube.

If you want a bigger list of zombie movies, check out the Zombie Movie Database.

I see by my calendar that Yom Kippur is coming up this Saturday. I know that it's a Jewish religious holiday, but I don't know much more about it than that.

Mushka (age 4) and Rochel Goldman (age 2) help their mother light candles in preparation for Yom Kippur. It is also customary to light candles and bless the challah (traditional bread) the night before Yom Kippur.
(Photo from CrownHeights.info)

Blowing the shofar at the end of Yom Kippur services
(Photo from Britannica.com)

As I type this, there are five days left until Yom Kippur. . . .

Some of you may have noticed an erroneous post here. I maintain another blog elsewhere, and I accidentally posted an entry I meant to go there onto the Daily Apple. It was, not coincidentally, about being drunk -- on Bell's Two Hearted Ale, by the way, which is my beer of choice when I can find it.

(Ben at SevenPack.net, where this photo comes from,
agrees with my opinion of this way-tasty beer.)

Someone alerted me to blogging my error this morning, and in my reply thanking him, I said, "that's what happens when you're sheets to the wind."

Then, of course, Apple Lady me wondered where that phrase, "three sheets to the wind," comes from. 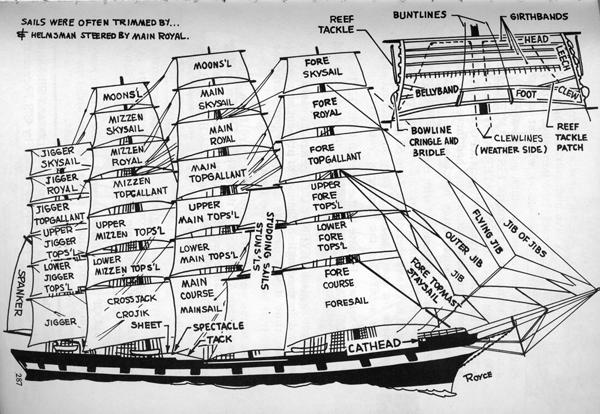 On a ship this complicated, if the majority of its sheets were not under control, it would be complete chaos on board.
(Diagram from Power Moby-Dick)


So that's the short answer. But the Apple Lady who likes specifics and who likes to understand things as completely as possible wants to know, is it the ship that's out of control, or is it the sails? I mean, are we meant to see the drunk person as the ship, or the sails? And in what way is the ship out of control -- rolling and pitching? Listing too much to one side? Blown about in any direction whatsoever? I want to know because I want to know how we're meant to see the drunk person: staggering? Wobbling about? Weaving side to side?

This diagram shows only one jib sheet on this small craft. But there is another jib sheet on the other side of the boat.
(Diagram from Building Sailing Skills)

(Drawings from MacGregor's How to Sail)

Looks like this guy and his friends are working on untying their third sheet.
(Photo from The Drunken Blog)


For the record, I was not at three sheets. More like two.

This is what sailing is supposed to look like. Whoo, that looks good, doesn't it?
(Photo from Macgregor's Photo Gallery)

I broke my toe about a week and a half ago (right foot, pinky toe) and I've been walking gimpy to keep from putting weight on it or bending it. It's been sore and when I'm sitting, it often feels like the blood is rushing to my foot, so I've had to change my position a lot and find a way to put my foot up off the floor. The past day or two it hasn't hurt as much or as often, though.

I'm not sure whose toe this is, but it's pretty close to what mine looked like about 10 days ago. Best thing to do for a broken toe, by the way, is tape it to the toe next to it.


I looked up how long it takes a broken bone to heal, and the best estimate I found, specifically for toes, was three weeks.

So that's not my question. My question springs from something related to the broken toe. Usually when I have my foot propped up or when I'm lying in bed trying to fall asleep, various muscles in my foot twitch like crazy. Sometimes for as long as ten minutes.

I've been getting muscle twitches elsewhere too, like in the back of my hand where it's all bony and you don't even really think about muscles being there, or another time in some strange tissue deep under my skin, or in my eyelid, or another time, right next to my ear. Little flutters happen in all sorts of places, one after another. It feels almost like tiny little fireworks are going off all over the place under my skin. Like these, except much, much smaller.
(Photo from a July 4, 2007 entry of The Big Picture)


The muscle twitching has been happening often enough, I'm curious to know, what makes your muscles twitch?

Still of a person with Tourette's syndrome, from a documentary about Tourette's, called Twitch and Shout

Sometimes the muscles that twitch are "deep muscles" like the ones indicated here.
(Image from Health.Allrefer.com) Too much caffeine can make you twitchy.
(Image from Sovrana Coffee Trading Corporation) Eating these foods may help you fight off the shakes.
(Image from Medline Plus)


So it sounds like the best thing to do when my muscles are twitching like a pack of otters under my skin is try to relax and drink a lot of water. And maybe eat a few pieces of cheese for good measure.


By the way, my favorite quote from that Michael J. Fox interview (see above link) is this:

Some pretty unpleasant things have been happening in my personal life lately. Unlike other bloggers, I don't want to go into details here. Suffice to say, it's sad.

Some time has passed and I'm able to contemplate making more Daily Apples. But it's been hard to come up with an idea. So I tried to think of a topic that is the exact opposite of sad. First thing that came to mind: rubber duckies.


I mean, how much more innocuous does it get?

Maybe part of the reason this came to mind so quickly is that my previous entry was something from Sesame Street. Regardless, the first thing to say about rubber duckies is that they were Ernie's favorite toy and the subject of another hit Sesame Street song. (It's just a little too cutesy for me to post here. But if you want to watch him sing his song, here it is on YouTube.)


Then I found this other little tidbit about some rogue rubber duckies that have been traveling the world's oceans since 1992: (Diagram from the Daily Mail)

This is Curt Ebbesmeyer, who's been tracking the bath toys since they busted loose in 1992.
(Photo by W. James Ingraham of NOAA, sourced from The Lede)


Now here are some general facts about rubber duckies:


If you want to play some wacky online rubber ducky games, try Rubber Duck Land.com. I especially recommend the Pin the Beak on the Ducky game -- but be sure to move the beak to all sorts of places and very fast to experience the true cacophony.