Like most of you, I've been hearing more and more news reports about the refugees who've left Syria.  I was kind of taking it in, kind of not. Then I heard one news report on the radio say that an estimated 5,000 people are leaving per day. Each day.  That number stunned me so much, I decided to find out more.

My big question was, if you were in charge of a country where people were so desperate to leave that 5,000 people each day would rather abandon their homes, the places they grew up, the food and the customs and the music and their friends and their family and their places of worship and the places where family members are buried -- they would rather leave all that, and put themselves in the hands of complete strangers to guide them into completely foreign lands and risk being taken advantage of, kidnapped, raped, or left to suffocate in a truck, or who knows what else -- 5,000 people each day would  rather risk all of that than to stay in your country, wouldn't you start to think that maybe something's wrong with the way you're running your country?

Mm, apparently not if you're the guy in charge of Syria. Syrians in a refugee tent in Nizip, Turkey in 2013.  Apparently, Bashar Al-Assaad would rather blow up his country than have these people stay in it. Just look at those threatening children.
(Photo from Reuters, sourced from PRI)


I don't want to give you a history of all that's happened in Syria.  Lots of other sources out there have done a much better job of that than I could (see Sources at the end of this entry).  Instead, I'm going to give you some facts here & there that you might not know (I didn't know these things).  Because everybody's saying this is the worst humanitarian crisis since World War II.

In reading about the refugee situation, I discovered I got kind of tone deaf to all the numbers being tossed around. They're all so big, it doesn't take long before they start to get meaningless.  I had to find reference points for those numbers so I could get a picture of just how big they are.  So I'll give you some of those numbers along with the reference points, too.

I know this map is hard to read, and it's outdated from 2012, but my point is the arrows. They're pointing to all countries on all sides of Syria. Meaning that people are taking any and every route possible to get out of the country.
(Map from somewhere on News Aggregator)

One of the refugee camps specifically for those who have left Syria. This one is in Za'atari, Jordan, as of 2013. The camp is 30,000 square meters and can hold up to 113,000 people. Over 600,000 refugees from Syria have come to Jordan.
(Photo from the US State Department, sourced from Wikipedia) 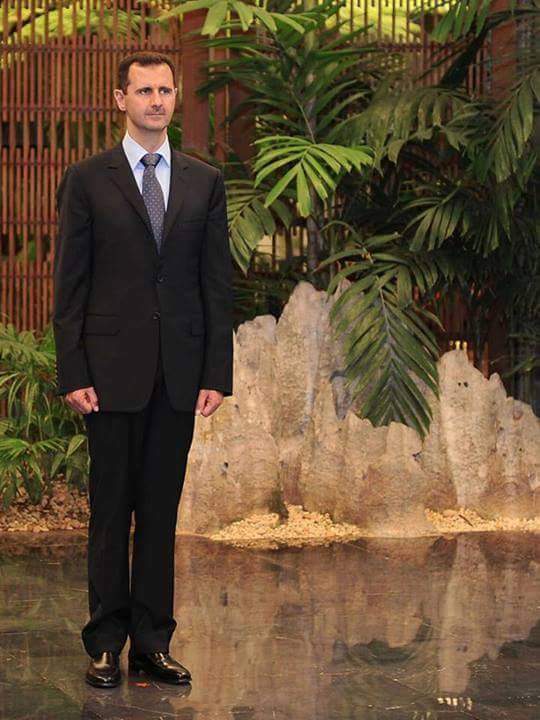 Looks like your basic nerd, doesn't he, with the sleeves of his jacket too long and everything. He was trained to be an ophthalmologist.  But apparently this is what a desperate villainous dictator looks like.
(Photo from Bashar Al-Assad's personal website) 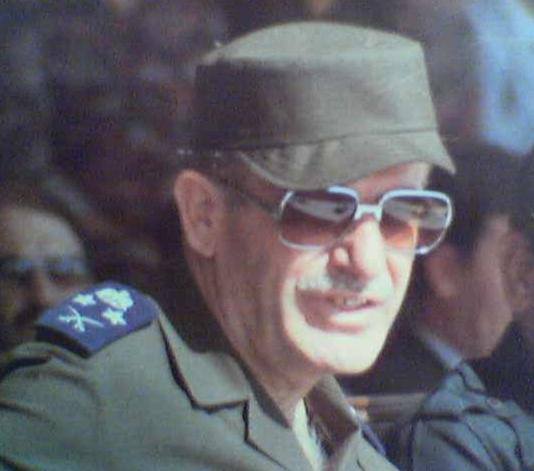 This is Bashar's dad, Hafez. How many people must suffer because of Bashar's daddy issues?
(Photo from Bashar Al-Assad's personal website)

Syrian residents in a refugee camp within Damascus waiting for food to be distributed. These are people who have left their home somewhere in Syria and come to this camp for the displaced in Damascus. The food aid being given out is not from their own government but from the UN and other relief agencies.
(Photo from the United Nations Relief and Works Agency / Getty, sourced from US News) 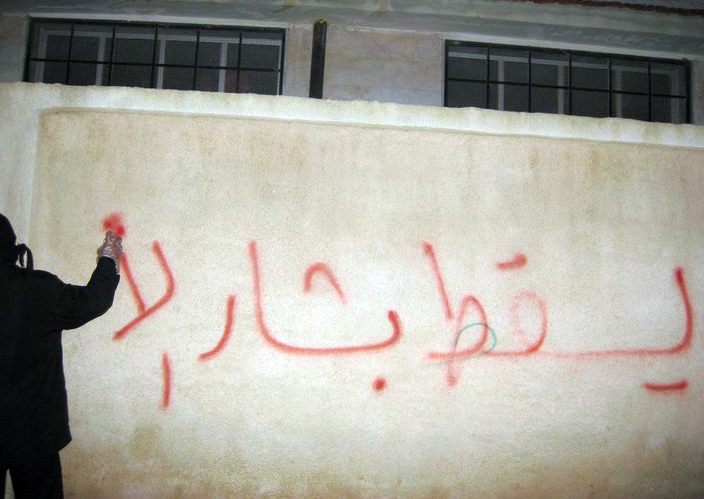 This graffiti, painted in 2011 during the initial uprisings, says "Down with Bashar."
(Photo from jan Sefti on Flickr, sourced from Wikimedia) 
This page lists all the organizations (primarily US) that are providing some form of aid or support to Syrian citizens or refugees.


Sources
Summaries of the Conflict
BBCNews, Syria: The story of the conflict, March 12, 2015
BBCNews, Syria's war
The Washington Post, 9 questions about Syria you were too embarrassed to ask, August 29, 2013
The Numbers
CIA World Factbook, Syria
World Population Review, Syria Population 2015
CNN, War has forced half of Syrians from their homes. Here's where they've gone, September 11, 2015
The Situation
The New York Times, For Those Who Remain in Syria, Daily Life is a Nightmare, September 15, 2015
The Economist,  Syria's Humanitarian Crisis, June 8, 2015
Newsweek, Syrian Refugees: All You Need to Know, September 17, 2015
The New York Review of Books, Syria's Refugees: The Catastrophe, October 10, 2013
The Spark
The New York Times, A Faceless Teenage Refugee Who Helped Ignite Syria's War, Februrary 8, 2013
CNN, Daraa: The spark that lit the Syrian flame, March 1, 2012
Open Doors, Graffiti on a Wall Sparked Syrian Conflict, March 9, 2015
Posted by the apple lady at 1:02 AM 2 comments: Links to this post

My body has rather obvious stores of fat available to it. How come when I'm hungry, it doesn't just burn that extra fat?  How come my body wants me to eat more food, when it's already got a lot of food stored up in the fat?

Asking for a friend,
A.L.

Well, A.L., I had to read up on this one because I've had that very same question for a long time (imagine that).  Based on what I've read, the answer is: fat don't work like that.

Fat cells very nearly have a mind of their own. They don't work the way other cells do and they don't take direction from many other parts of the body. They will keep getting bigger in spite of other processes going around them which should otherwise direct them not to.
(Diagram from QMP's Plastic Surgery Pulse News) 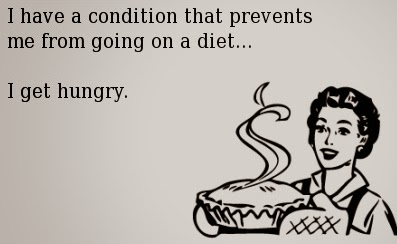 This, on the other hand, is not just a joke, it's the truth.
(someecard sourced from All-species fitness) A representation of a triglyceride. Three fatty acids plus glycerol. This makes for a big, complex molecule -- too big to get back out through the fat cell membrane.
(Image from Antranik.org)

Another depiction of a triglyceride being made from 3 fatty acids and glycerol, and then being stored in the fat cell of a prairie dog, I think that is.
(Diagram from The KetoDynamic Antidote)

This is a very complex diagram that includes things not discussed in this entry, but the main point is to notice all the green boxes which contain the word Insulin and the one red box containing the word Insulin. This shows in how many fat-storing processes insulin is involved.
(Diagram by Keith Frayn, sourced from The Eating Academy) Insulin. The police officer that does not let the triglycerides out of fat jail. Now this is the kind of turkey sandwich I can get into. Not the slimy, weensy, sliced turkey from a plastic package, but hunks that have been cut off the roasted bird, with a healthy amount of mayonnaise and butter and some cheese too, on whole-grain bread. This one is made with roasted red peppers and pesto and fontina cheese.
(Photo and recipe from inspired2cook) 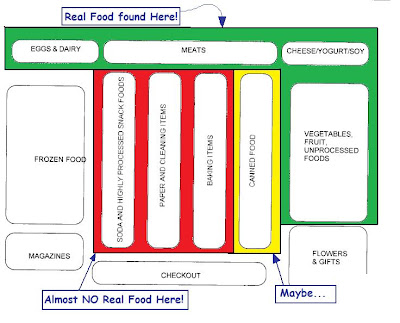 
P.S. When I couldn't eat sugar for a while -- and I mean I had no sugar at all. Not just the typical things you'd think of like ice cream or cookies, but also no bread. No ketchup. No tomatoes. It was intense. I ate almost exclusively protein and vegetables. -- I held to the restriction for about 3 months. And I lost 28 pounds. I wasn't even that much overweight to begin with.

When the problem that precipitated this drastic diet went away, I started eating some sugar again. I gained back the weight I'd lost and then some. :(  But I am proof that if you want to lose weight, don't eat the sugar.

P.P.S. I also learned, though another source, that if you're trying to change your behavior, it's much harder to achieve a Don't than it is to achieve a Do. So I'll say that while you're not eating sugar, Do eat proteins. Do eat vegetables. Do eat crunchy, complex things. Do add spice.

Salt & pepper. Two of the best anti-sugar aids ever.
(Photo from Gizmodo)


Sources
David S. Ludwig and Mark L. Friedman, Always Hungry? Here's Why, The New York Times, May 16, 2014
Gary Taubes, Why We Get Fat: The Diet/Weight Relationship, An Alternative Hypothesis, November 21, 2014
Rob Harris, Does the Body Burn Fat When You Are Hungry? Healthy Living
Berit Brogard, Does the Body Burn Fat When You Are Hungry?  Jillian Michaels
Primal Potential, Hormones and Fat Loss: The Hormone Responsible for Making You Fat, Hungry, and Tired, September 1, 2014
Marsha Hudnall, How Fat Makes You Hungry: The Link Between VAT Fat, Chronic Inflammation, and Hunger, Green Mountain at Fox Run
Encyclopedia Britannica, Fatty Acid
WebMD, The Facts on Leptin: FAQ
American Diabetes Association, Insulin Basics
My Wellness Center, The Importance of Insulin
Posted by the apple lady at 12:59 AM No comments: Links to this post

Yesterday, I was sitting outside a coffee house with my friend, let's call her Kiki Malone, and she noticed that the tree that was shading our table was a ginkgo tree.  I turned and looked at the leaves.  Seeing the distinctive fan shape, I said she was right, it was a ginkgo.

Only the ginkgo tree has leaves with a fan shape.
(Image from The Anecdotal Goat)


She said, "It's the oldest living tree in the world."  Then she added, "I think.  A person has to be careful saying things like that around the Apple Lady."

I said it had to get annoying, being friends with someone who often says, "Actually, according to what I learned when I did a Daily Apple on that topic. . . ."  Kiki was very gracious and said it wasn't like that at all.  She also said many positive and appreciative things about this here Daily Apple blog as a whole.

So, as a thank you to Kiki for saying so many nice things about the Daily Apple, here is an entry for you on ginkgo trees.  And let me begin by saying: You were correct.

Artist's rendering of what the Triassic period and its dinosaurs might have looked like. There should be some ginkgo trees in there somewhere. . . .
(Wallpaper from National Geographic) This particular ginkgo tree is a 1,400 year-old female. She lives in Jonichiji, Japan.
(Photo by Atsuko & Kunihiko Kato, on The Ginkgo Pages)

The items in these four bowls all come from the fruit. What they call "berries" is the fruit of the female ginkgo. Inside the fruit is the nut in a hard white shell, almost like a pistachio shell. Inside the shell is the nut, which is best roasted. Once that's done, peel the outer layer off the nut to get to the glistening, green nut meat.  But don't eat too many of them, or you'll get a stomach ache.
(Photo from Hot Topix Suburban Foragers)

What the fruit looks like on the ginkgo branch. These look a little too yellow; might need some more time to ripen.
(Photo from Kennesaw State University)

Catalpa Road  in Lexington, KY lined with ginkgos. Why they didn't call it Ginkgo Road, I don't know.
(Photo from Panoramio)

I can practically hear all the laughter from the ginkgos up and down this tunnel of them, in a park outside Tokyo.
(Photo from Maxi's Comments) 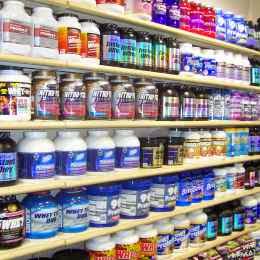 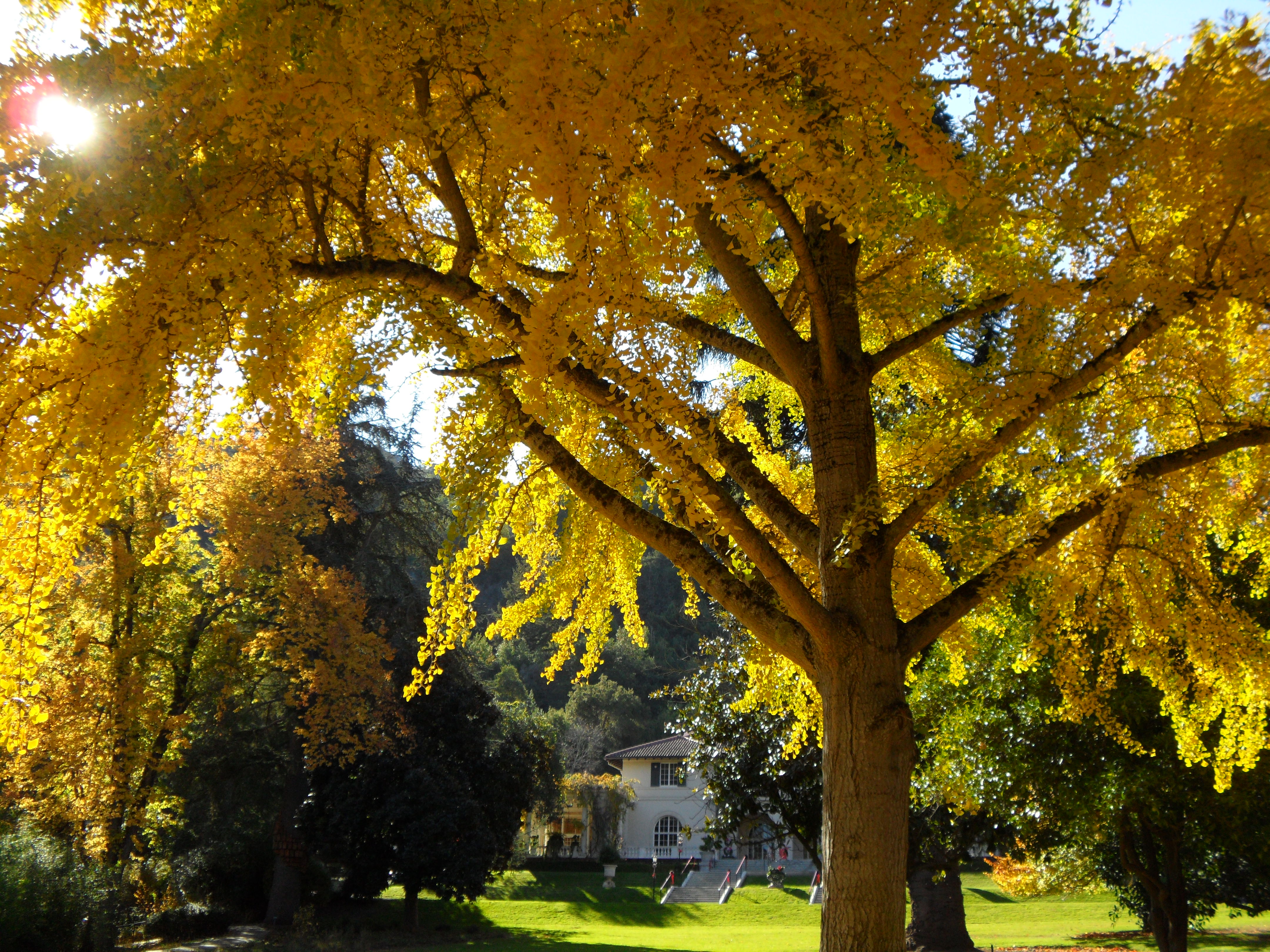 This ginkgo lives at the Montalvo Arts Center in Saratoga, CA.
(Photo by Nathan Zanon)