So I'm watching water polo on the Olympics, and I keep thinking, man, that looks hard.  I can't imagine treading water, fighting off the other player, and flinging the ball to the net, then having to swim as fast as possible to the other end of the pool.

On top of all that, I've heard that water polo is actually a rough sport, that there's a lot of scrapping and injuries.  It looks pretty benign, with all that water and the bathing suits and the funny caps, so it's kind of hard to believe it's all that rough-and-tumble.  The announcers aren't saying much about the behind-the-scenes--or under-the-water--truth about the sport.  So it's time for the Apple Lady to find out. Water polo.  With all that splashing and waving of arms and swimming around, is it really that violent a sport?
(Photo from Wikipedia)


HOW PEOPLE DESCRIBE IT

The eggbeater kick, which water polo players use to stay afloat while they're playing.
(Photo from coachesinfo.com)

Here's a shot of some of what goes on underwater during a water polo match.  You can see people in the midst of their eggbeater kicks, but it also looks like the guy in the foreground may have just gotten shoved underwater by his opponent.
(Photo from SM Texas)

Look how high out of the water this guy is.  He's not standing on anything, he's just doing his special eggbeater kick to propel himself up higher out of the water.
(Photo from NorCal Water Polo)


There are tons of great photos out there of water polo players in action, showing how strong they are.  I can't show you any of them because they're all owned by Getty or Corbis.  So you'll either have to click the link to see for yourself, or just trust me when I say, these are some impressive athletes.

US Men's Water Polo team, 1996. I bet if it were safer to do so, and allowed, they would play without their bathing suits.  OK, yes, this is some eye candy for some of you Daily Apple readers out there.  But I posted this for another reason, which is to say, judging from how ripped these guys are, you probably have to be in this kind of super-great shape to play this sport. So I take this to be further evidence that this is a very physically demanding sport.
(Photo from The Hostages)

This is Lyuba Tschougounova, who played in junior college in 2009.  Looks like she's fending off two opponents at once, one who is actively trying to block her, and the other at the ready.
(Photo from Concordia Eagles)

The hold, sink, or pull back rule. This rule seems to be quite a big gray area, judging from the rule book's efforts to define what is happening in each diagram.  I'm guessing that it's like holding in football, that you're not supposed to do it, but that it happens all the time.
(Image from FINA Water Polo Rules)

This looks like this might qualify as a hold.  Once again, I can't show it to you here.  Thanks, Getty!

Striking with the elbow backwards is classified as a "brutality" and can get you kicked out of the game.
(Image from FINA Water Polo Rules)

I wouldn't call this intentional, but it does look like this altercation could have turned into something fairly serious.

This is Lauren Wenger. She was named the June Athlete of the Month in 2009 by the US Olympic Committee.  Look at her enormous muscles in her shoulder.  That speaks to how strong water polo players' shoulders get from having to whip the ball as hard and fast as they can.
(Photo from Women Sport Report)

Ervin Zador got punched in the eye during the "Blood in the Water" match between Hungary and USSR in the 1956 Olympics.
(Photo from Wikipedia)

And to put some of the fun back into it, here you go:

Sauce for the goose....
(Photo from magaz!nes.com)

This is another question that came up while I was away on vacation.  When those wildfires were burning in Colorado and elsewhere, news reports kept saying things like, "The fire is 30% contained," or "The fire is estimated to be 45% contained."  In one news story I heard on the radio, the reporter asked the fire chief how he calculated containment.  He said something about the amount of acreage involved, but he said it so quickly, I didn't catch it.

So I wanted to find out, how do they calculate what percentage of a wildfire is contained?

Wildfire taking out trees as it moves across the ground.
(Photo from Chez-Audelle) 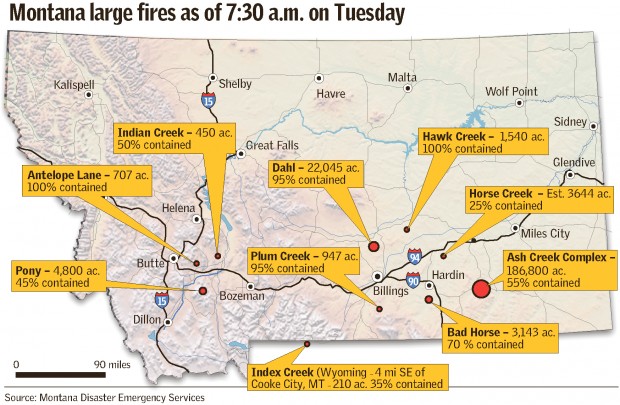 On July 4, 2012, several wildfires were burning across the state of Montana. The percent containment figures make for a nice, neat graphic, don't they?
(Map from the Billings Gazette)

Today, most wildfire containment methods use retardant dropped onto areas just beyond the fireline, as shown in this photo of the Waldo Canyon Fire, June 23, 2012

(Photo from The Colorado Springs Gazette)

I find this to be a pretty fascinating map.  This is a map of the High Park Fire in Colorado as of June 21, 2012. The red area represents where the fire was burning on that date. The red outline is the "uncontrolled fire edge." The black outline is the "completed line," meaning where they have put some sort of fire control measure in please.  The map is very detailed, even including gray-shaded areas where an older fire once burned.  But nowhere does it say anything about containment--presumably because, according to firefighter parlance, containment had not yet been reached. To see a larger version of the map, go to Summit County Citizens Voice.
(Map from Summit County Citizens Voice) Obviously the intensity of the wildfire above is far greater than the one below.
(Photo, top from Treehugger. Photo, bottom from US Fish & Wildlife Service, sourced from Wildlife Risk Explorer) Firefighters working on a wildfire in Australia
(Photo from Chez-Audelle)

So I've been away on vacation, and I read about those derechos that hit several states.  They didn't hit where I was, and I had zero access to the internet or TV.  Those of you at home may have heard all sorts of explanations and definitions of a derecho already, but I had only a smallish daily newspaper, so I did not.  Now that I'm back among the swirl of telecommunications, I want to find out about these derechos. 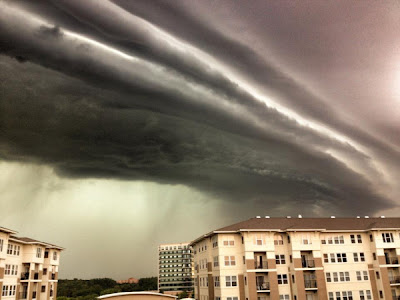 The June 2012 derecho on the southeast side of Chicago.
(Photo from Twitter, sourced from The Original Weather Blog)


Mainly I want to know, what the heck are they, and is this some new term the meteorologists have cooked up?  Is this a sign that global warming is getting crazy?

Radar image of the derecho on June 29, 2012 (my birthday, by the way, and this is the second one to happen on my birthday).  This derecho was especially widespread, sweeping across 700 miles.
(Image from the National Weather Service, sourced from Wikipedia)

This field of corn in Indiana has been all smashed down by the high winds of the 2012 derecho. Gives a pretty good sense of a derecho's straight-line, strong winds.
(Photo from the DuBois County Free Press) You've probably seen this image of the 2012 derecho all over the place.  This was taken in La Porte, Indiana.  The front line is clearly visible here.  That's typical of thunderstorms, but this is like a line drawn in the sky with a ruler. And you can just tell by those roiling clouds that they are not messing around, this is going to be a big-ass storm.
(Photo by NASA Goddard Photo and Video) This is in the DC area, after the 2012 derecho. The root mesh is sticking up 10 feet in the air, which gives you an idea of how large this tree is. Note the power lines pulled down by the tree.  This sort of thing happened all over the place, which is one of the reasons it took so long for the power to get turned back on for so many people.
(Photo by woodleywonderworks on Flickr)

How, When, & Where Derechos Form Map showing how likely derechos are to occur in various parts of the United States. From this map, it looks like derechos never occur west of the Rockies.  That isn't exactly true; they have happened in the West, but extremely rarely.
(Map from NOAA) Hinrich's figure depicting a storm he was the first to call a derecho sweeping across Iowa in 1877.
(Image from NOAA) 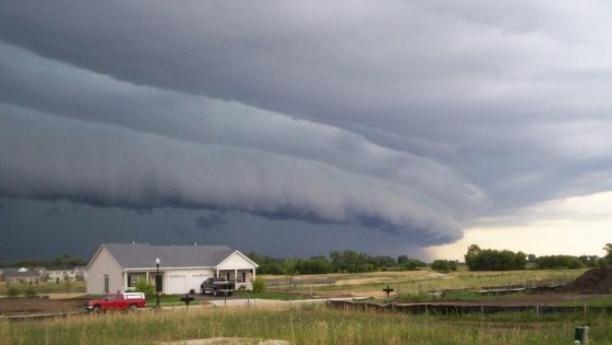 I don't have anything insightful to say about this photo other than holy crap, look at that thing. This is Minnesota, June 29, 2012.
(Photo by Brittney Misialek for the Minnesota Star Tribune) 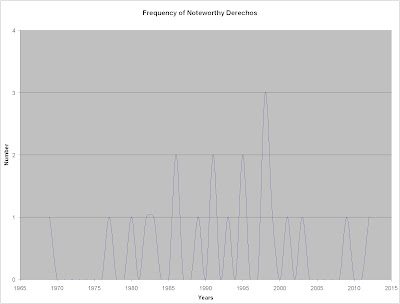 (Data from NOAA; chart by the Apple Lady) Man, the wind pulled up that tree and the grass like it was sitting in carpet. This is in Vineland, NJ, and that's Grace.
(Photo from MyFoxPhilly, taken by Margaret Hartman)


Related entries: Thunderstorms; Where Does the Debris Go?