I'm working on an entry for you about ice cubes.  Surprisingly, there is a lot to learn about the subject.  So I'm not finished with it yet.

In the meantime, here are some ice cube trays.  What do you think of ice cubes shaped like Pi? 
Or how about the Titanic sinking in your drink?

I have smelled skunk in the air twice in the past two days. Is it my imagination, or do I smell skunks more often this time of year in general? 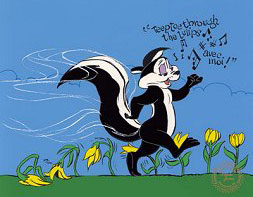 Is that eau de skunk I detect on the air this fall evening?
(Photo from Warner Bros., sourced from Misster-Kitty)

The word "fluke" came up in conversation the other day.  As in, "I don't know what the deal with that was.  I guess it was just a fluke."  It struck me as a funny word, first of all for the way it sounds.  Not too many words in English are very similar.

Then the more I thought about it, I realized its definitions made it an unusual word too.  Because it can mean some oddball thing that happens out of the blue, but it also means a fish or something too I think, and it's also a type of worm.  That's a lot of different kinds of things for one word.  How come there are so many definitions?  And are any of them related?

I. The OED says the fish came first.

This woman is holding a fluke that she caught.  Note the shape of the fish as well as the fact that it's pretty flat compared to most other fish.
(Photo from Geared Up Publications)

This is one type of fluke worm.  Others are more worm-like in shape, but this one's shape is especially similar to our friend the fluke fish.
(Photo from Shacharit Serefina) 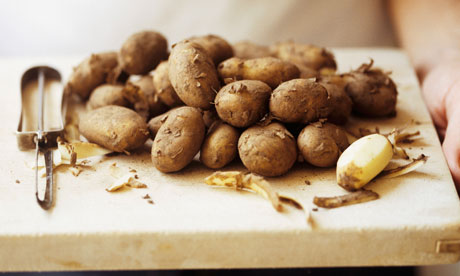 
II. The next set of words, says the OED, are all named flukes because they look like the fluke fish.

Here's an old-school type of anchor. The flukes are the flared-out ends where the anchor would bite into the sea floor.
(Photo from the Anchor Bag)

This is a newer type of anchor, called the Danforth Standard Fluke. Here, the flukes are the very large triangular plates that stick up from the horizontal crossbar.
(Photo and anchor available from iboats.com)

This particular fluke belongs to a baby blue whale swimming off the coast of Costa Rica.
(Photo from Nature's Crusaders)


III. Now we get to the "oddball" definition.


This video is labeled a fluke shot, but really, this kid is showing a tremendous amount of skill in managing the spin and placement of the ball.  The shot is challenging enough, though, that maybe he'd have trouble making it happen very often. Also, the cue ball is not involved, so he couldn't really use this shot in an actual game.  But still, nice touch, dude.

Posted by the apple lady at 1:52 AM No comments: Links to this post

My niece said she saw a "very ugly bird" a few weeks ago.  She thought it might be a woodpecker, so she asked me to do a Daily Apple about woodpeckers.

I've seen quite a few woodpeckers recently, and I don't think they're ugly birds at all.  I'm not sure I would say any bird was ugly except maybe a vulture.  But let's put the question of beauty or ugliness aside for now and just talk about woodpeckers.

Woodpeckers don't just have long, stiff beaks, they also have very long tongues, as this photo of a red-bellied woodpecker demonstrates.
(Photo from the Hilton Pond Center)

This is huge.  It's kind of like finding Elvis.

--Frank Gill, a past president of the Audubon Society, when he heard the news that someone had seen the ivory-billed woodpecker.

Pileated woodpecker with the famous red crested head. I don't know if you can tell, but the photo is a little blurry where the bird is tapping super-fast against the trunk.
(Photo from Avian Web) 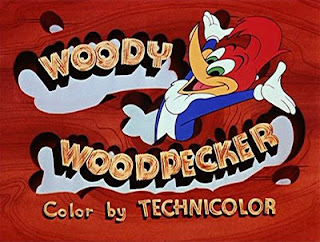 The Pileated is probably the woodpecker on whom Woody was based.  I freakin' hated Woody Woodpecker, by the way. He annoyed the daylights out of me.  The real bird is far less irritating.
(Photo from iOffer.com)

The Nuttall's Woodpecker is distinguished from its very similar fellow the Ladder-backed woodpecker by the thick black stripe at the base of its neck.  The Nuttall's lives in California almost exclusively.
(Photo by Harry Fuller at Towhee.net)

Acorn woodpeckers can cause a lot of damage, not just to trees but also to fence posts, wood-sided buildings, and as in this case, telephone poles.
(Photo by Sue Bryan at Norfolk Birders)

The famous yellow-bellied sapsucker. As you can see, it really does have a yellow belly. It also looks a lot like a woodpecker -- which is why it's part of the same family.
(Photo from Urbee Car)

I know I just did a Daily Apple entry last night, but I'm trying to make up for the dearth of entries recently.  And besides, this makes it a true Daily Apple, Alex!

I was looking through an catalog from Arkansas today, and that reminded me to ask, Why the heck do they pronounce it "ARK-an-saw" and not "ar-KAN-sas"?  Given that Kansas is pronounced "KAN-sas," that seems to be the pronunciation that would make sense.  Why is it different?

The Arkansas River runs diagonally across the center of the state, while the Mississippi flows south along the eastern border.  The Quapaws lived somewhere in the area east of what is now Little Rock.
(Map from GreenwichMeanTime.com)

Zebulon Pike wasn't French but American.  He was born in Trenton, New Jersey, and served under General George Washington before he went exploring in the southwest.  I think they're still doing their hair in New Jersey like his.
(Photo from Pike's Peak Cog Railway)

The red line shows the Arkansas River flowing through Arkansas down there on the lower right as well as through Kansas, which is the pale yellow state in the upper middle. The fact that the same river runs through both states is why their names are similar.
(Map from Encyclopedia VBXML)

I have slacked off in my Daily Appling lately, for no real reason.  I'll try to make it up to you this week with some good entries.  Hopefully, you'll enjoy this one. 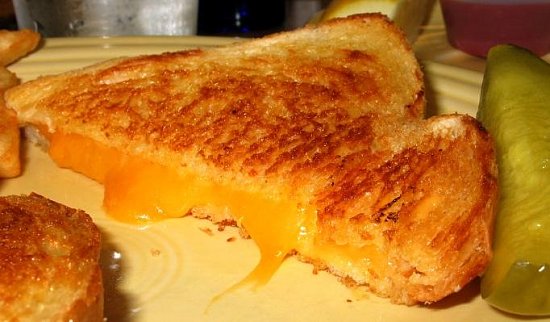 Grilled cheese with pickle and fries.  Boy, that looks good, doesn't it?
(Photo from Yum Sugar)

The Croque Monsieur, a French ham and cheese sandwich whose name literally means "Mister Crunchy." The bechamel sauce on top, by the way, is made of butter, flour, salt, pepper, Parmesan and Gruyere cheese.  Extra good.
(Photo and recipe for the sandwich from Simply Recipes) I don't know how much longer I want to do it because I'm living in fear.  It would be such a stupid thing to get in trouble for. . . . I kind of want to quit, it's getting too big, but I want to feed these people.

Diana Duyser with her famous grilled cheese sandwich, packaged in the plastic case with cotton balls where she kept it for 10 years before selling it on eBay.
(Photo from Atheist Point)

It is most common for the assembled sandwich to be buttered on the outside and placed on a griddle, pan, cast iron skillet, or rarely, in a dedicated sandwich maker to be heated. Once the bread on the bottom half of the sandwich has reached a toast-like texture, the sandwich is flipped and continues cooking until the other side has toasted and the cheese has melted.

Another method is to butter one slice of bread on both sides, grill the bottom side until the butter melts, then flip. Wait for the inside to be grilled, flip and add the cheese. Then butter the other slice of bread and grill, then place the slices of bread together.

If you really want to get fancy with your grilled cheese, here's one with Monterey Jack cheese, sliced jalapeños, and butter.
(Photo from Asylum.com, which has a list of 5 fancy grilled cheeses)