I love Title IX.  Thanks to this law, there was a girls' softball team at my high school for which I could play.  We weren't very good because our school didn't put much money into softball as compared to, say, football or swimming, so our coaches were pretty much deer-in-the-headlights and so we sucked.  But at least I got to play.  Prior to Title IX, there wouldn't have been any such team.

Photo of a rally in support of Title IX held in 1979.  For a long time, the only context in which people talked about Title IX was women's sports. But it has affected way more than just athletics.
(Photo sourced from Women's Sports Foundation)


Title IX has emerged in the news over the past few years as the basis from which groups of college women are demanding that their schools get better at handling allegations of sexual assault on campus.  I say, more power to 'em, literally. When I was an undergrad, the prevailing attitude was, hey, you put a bunch of late-teens, early-twenties kids together and give them alcohol, of course women are going to get raped. What are you gonna do?  That attitude, in my opinion, is a reprehensible abdication of responsibility, and it has got to change.  Title IXers, for working to change this culture to make college campuses safer for everyone, I applaud you.

More recently still, Title IX is the policy behind which various governmental institutions are requiring that public bathrooms accommodate transgender people.  There's been a lot of outcry against this, and as far as I can tell, the primary argument is that pedophiles and perverts will use this license to wreak havoc on our innocent ones when they are perhaps most vulnerable and defenseless.   To this I say, if the problem is the pedophiles and the perverts, maybe we should be doing something about them, as opposed to discriminating against the transgender among us?

In short, there have been a lot of references to and invocations of Title IX in a variety of contexts.  Hearing it so often has made me wonder, Title 9 of what?  What's Title 8?  Where did this thing come from, and whom should I thank for making it a rule in this country that people have to abide by? Richard Nixon, signing something into law
(Photo sourced from Pinterest, which is not so reliable at providing provenance)

At center: Patsy Mink, first Asian American and woman of color to serve in the US Congress, was a key force in the passage of what we now call Title IX.
(Photo sourced from the Women's Sports Foundation)


TITLES I through VII


TITLE VIII - No Money for Busing (almost there) 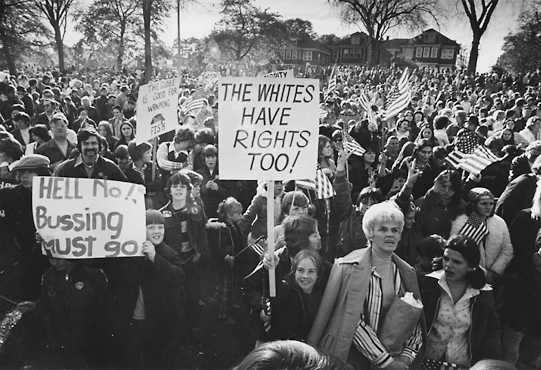 The debate about whether children should be bused to different schools to counteract segregation was hotly contested across the country. Here is one protest against forced busing in Boston.  Looks familiar, doesn't it?
(Photo sourced from U.S. History in Context)

TITLE IX - Here we are

No person in the United States shall, on the basis of sex, be excluded from participation in, be denied the benefits of, or be subjected to discrimination under any education program or activity receiving Federal financial assistance. 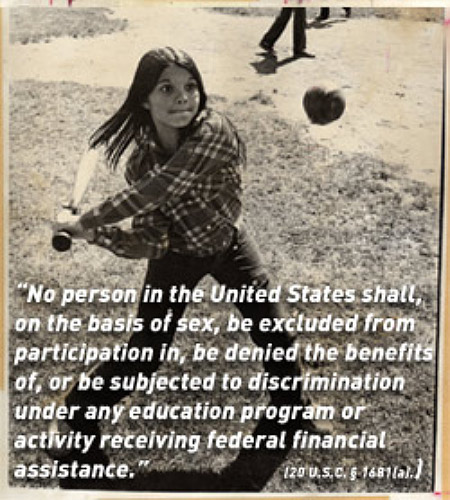 (Sourced from If I Only Had a Time Machine)