The air is buzzing with the noise of cicadas.  Which makes me realize, I know next to nothing about them.  I'm not a fan of their appearance, but I'm very curious about the loud noise they make. So what's the deal with cicada sounds? 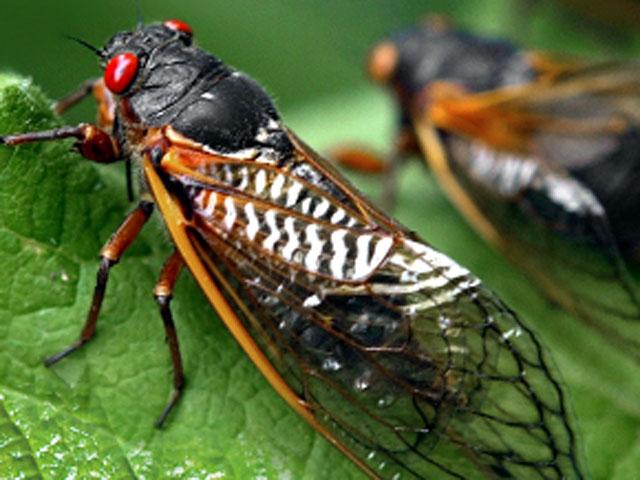 Close-up of one tymbal relaxed, then contracted. Popping the tymbal in and out makes a popping noise.
(Diagram from The Robinson Library)

Cross-sections of a cicada's abdomen. You can see the largely empty abdomen and how much space there is for the noise of the tymbal to create an echo.
(Diagram from The Robinson Library) Distribution map of the 13-year Magicicada populations.
(Map from Sanborn & Phillips, Biogeography of the Cicadas, Diversity 2013) 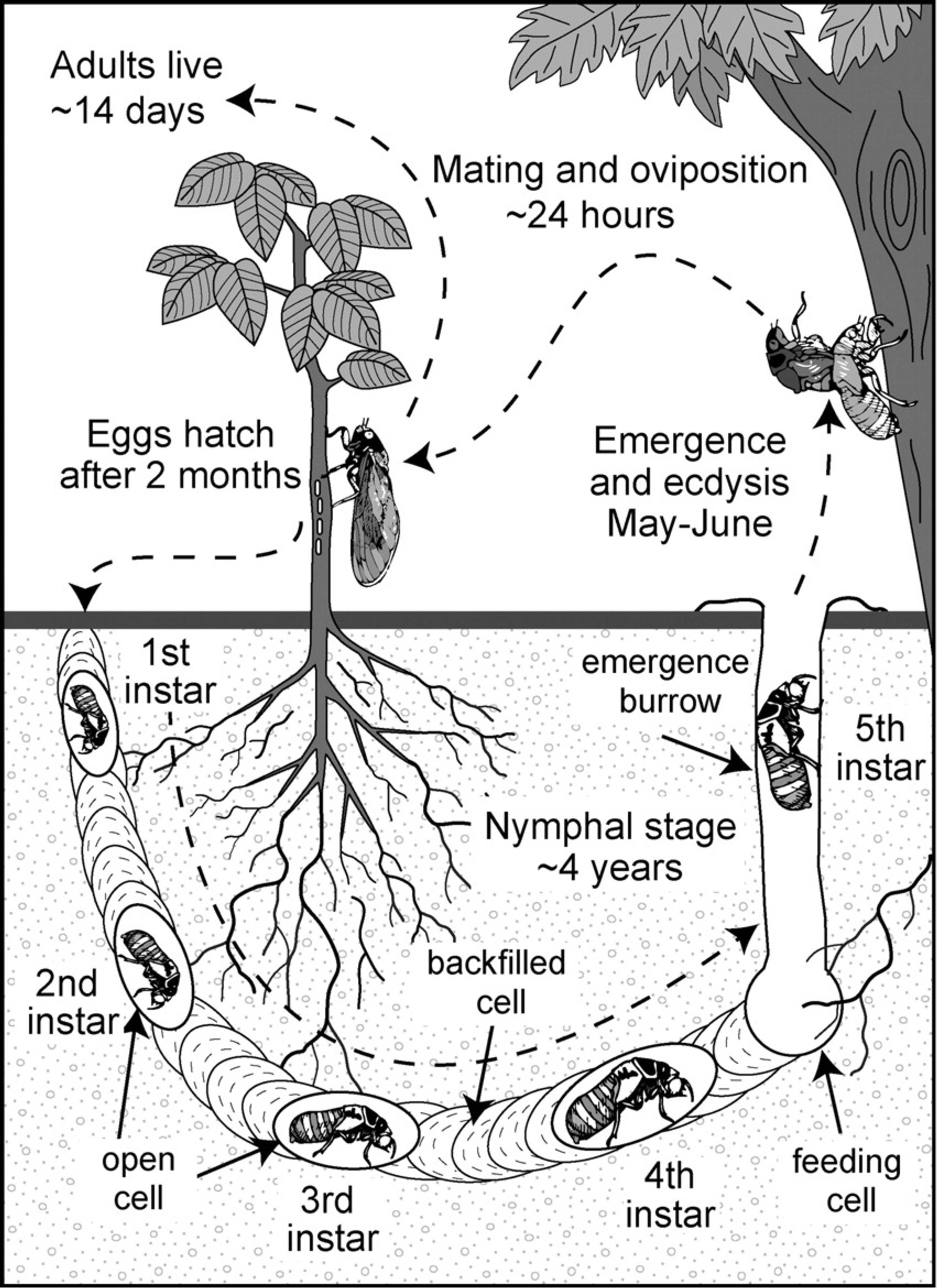 The life cycle of a cicada
(Diagram from The HouseholdPests.org)

Cicadas Are Not Locusts

Let me tell you a little story about fans.  Well, two stories, actually.  Maybe three, if you count the cows.

Recently, a friend of mine was visiting.  We'll call him Montgomery.  We went to an all-day event and when we came back to my house, we discovered the A/C was not working.  Broken. Busted.  No go, Charlie.  It had been in the 90s most of the day and very humid.  So it was really hot & stuffy in my house.

I got out one of my trusty box fans and Montgomery turned it on while I tried to see if the reason the A/C wasn't working was anything I could fix.  Turned out, no, the motor was dead.  Nothing I could do about that except put in a call for a repair man.  After doing that, I sat down on the couch in front of which Montgomery had placed the fan and turned it on.

This is very like the box fans I own.  Mine are also Lasko Weather Shield models.  They do the job, and they don't rattle. You can buy this fan from Amazon for about $39.  I got mine from Target for about $10 less, if memory serves.


Normally I turn my trusty box fans immediately to the highest possible speed (3 out of 3).  Montgomery had set it to 2.  I thought, of course at the higher speed the fan will cool things off faster, or more, or better.  So I turned the fan up to 3.  Much to my great surprise, the higher speed did not feel better.  In fact, it kind of felt worse.  Like it was blowing warmer air on us, or the higher speed air was battering us but not really cooling things off.  So I put it back down to 2, and instantly it felt better.  We felt more of a cooling effect, and the speed was gentler and more lulling.  We sat in front of the fan on medium speed and talked for a long time, and felt pretty comfortable, in spite of the hot stuffiness elsewhere in the house.

I vowed to remember this lesson and try it on my own another time.  So I did and now we come to my second story.  In both senses of that phrase.

My bedroom is upstairs, and the A/C even when it is working properly does a poorer job of cooling things off up there.  So usually at night I turn on one of my trusty box fans -- exact same kind as the one Montgomery & I had used -- aimed at where I sleep in the bed.  I keep the fan positioned a fair ways away from the bed, over by the closet, because that's where the A/C vent is.  My theory is the fan will blow the cool air that comes out of the A/C vent in my direction where I'm sleeping in bed.  It is this fan that I always turn up to 3.

I also put my box fan on a chair so it's roughly the same height as my bed.  Not as high as on the stool shown in this photo.  But a similar idea.
(Photo from Lennbob on Flickr)


But after Montgomery's visit, I tried out the fan at level 2 instead.  I thought that, as with my experience with Montgomery, the fan on the lower setting would feel cooler and more gentle and pleasant, and I would save energy besides.  So I lay in my bed, waiting to feel the gentle cooling of the medium setting.  Instead, I did not feel cooled off enough.  I tried this on three different occasions, and each time, I had to get up and turn the fan up to 3.  Then I could feel the cool breeze and drop off to sleep.

So what gives?  Why did the fan work better on level 2 in one instance, and level 3 in another?  You've probably already guessed the answer.  But first, let me tell you a few things I learned about fans.

How a ceiling fan distributes the air and therefore regulates the air temperature.
(Diagram from the Fan Doctor) 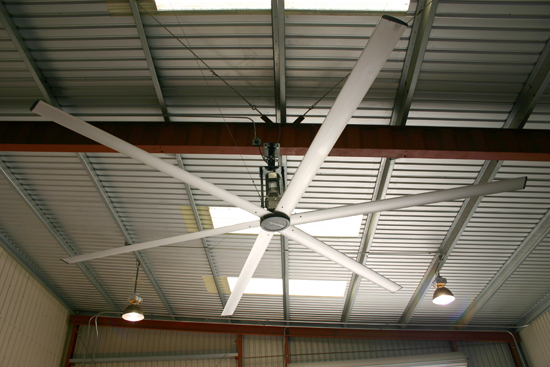 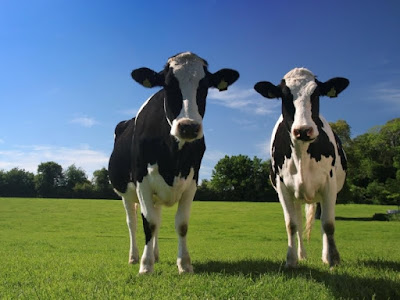 Another demonstration of the fact that distance matters.  The ceiling fan people are saying that when a room's ceiling gets higher, and thus farther away from you, you don't want to get a ceiling fan that goes really fast to make the moving air travel farther. Instead, you make sure the fan is positioned closer to you so you can better feel its effects.
(Diagram from CeilingFan.com) 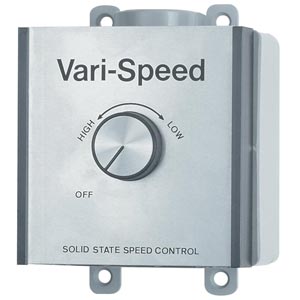 
P. S. Here's another trick I used to use in an apartment that did not have air conditioning: put a bowl of ice cubes in front of the fan. Here, they're using those freezer pack things.  Probably a better idea as they stay frozen longer. (Photo from The Good Human)