When I'm searching for a word or an idea and I can't come up with anything, my mind automatically supplies one of two default words: it gives me either turkey or chicken. I have no idea why this is so. I don't particularly like either of those two birds, alive or on the table. But those are the words that continue to pop up in my brain.

So I thought I'd do an entry on one of them, turkeys, just because that's what my brain is saying to me. These are domestic turkeys. The big one on the right is Wally, and the smaller one on the left is Wendy. They are 10 months old.
(Photo from the Dog Breed Info Center)

A turkey saddle
(Photo from Feathersite)

Wild turkeys, living on Long Island and monitored by the US Dept of Energy's Brookhaven National Laboratory.
(Photo from Brookhaven Natl Lab)

Another kind of Wild Turkey
(Photo from UK Wines)

Okay, United States, can we please all find another word to use besides "amazing"?

You get the point.

With all of these "amazings" being flung around, I've kind of lost track of what exactly the word means. So I looked it up in various dictionaries. Here are its three definitions:

By the way, "awe" is an overwhelming feeling of wonder or admiration, often inspired by a deity. So when we say we are amazed, we should be saying we are awestruck, given chills of wonder, thrilled by the presence of something majestic. Do you think that was really the case when a little-known band played at Angela K's wedding reception? Do you think that Ruben Studdard's singing performance would inspire such a reaction? Or perhaps these people are using "amazing" in its second form of use, to indicate their suprise at how good these performances were?

Okay, I'm just being snarky. Obviously, people have beaten this word to death and mashed its definition into an unrecognizable pulp that everyone is supposed to see as vaguely positive. But I'm sick of it. I'd like to start seeing and hearing a little variety, please. I recognize that I won't be able to get people to start using "amazing" in appropriate contexts, but maybe I can encourage people to use something else instead every once in a while.

Here are some alternatives:

(And now if you look back up at the title of this entry, doesn't it kind of bug you, even just a little bit?)

I was cleaning up today, and at one point I thought, "I'd like to just throw the whole shebang in the trash." But then I paused. What kind of word is shebang, anyway? Is it actually spelled she-bang? If so, what does it mean that a bang is feminine? Does its femininity somehow make it a much larger bang?

Sources
The Oxford English Dictionary, my micrographically reproduced two-volume set.
Etymologies & Word Origins: Letter W
The Phrase Finder Re: The whole shebang
Words to the Wise, issue 193, page 2
Posted by the apple lady at 1:26 AM No comments:

Sorry about the infrequent posts lately. In my free time the past few weeks, I was working on my taxes. This year, they were nightmare-ish. I had to fill out extra forms and schedules and worksheets and who knows what else. But now all that's done, filed, official, done. So, on to other things.

Some time ago, I was at the aquarium in Niagara Falls and I saw the strangest animal there. There were actually about six of them in the tank of water. They were very pale, looked like they'd never seen daylight in a kajillion eons, and they had these frondy things like extra arms sticking out of their necks.

Photo from Jean Hardiwck, Ph.D.'s page, which describes how she uses axolotls and other creatures to study cardiac function.


The sign beneath the tank said the frondy things were their gills exposed. They looked like something out of a Simpsons episode. The person I was with was disgusted, then fascinated, but then disgusted again by them. The more I looked at them, the more I thought they looked like they'd be good to eat. Fleshy, not too many bones, no fur or hair or scales to worry about. The person I was with said, "Ugh, you want to EAT them?"

It turns out, these things are called Axolotls. The word is pronounced like it looks: Ax-uh-lo-tul. Here's another picture: Photo linked from Steven Carr's page on the Origin of Evolutionary Novelty, Department of Biology, Memorial University of Newfoundland

Photo from Animalweb's page on amphibians 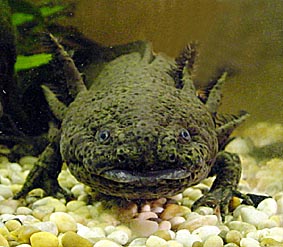 Photo from a German site on Axolotls

Photo from the University of Kent

I'm brewing up another topic for you, but in the meantime, I have a few updates to share.

My Betta fish, Fishfish, has revealed himself to be a bubble-maker. By that I mean he makes bubbles every day. After I change all the water in his tank, he makes a slightly larger amount. I learned in a book I read that Bettas tend to make the most bubbles after a 100% water change. According to this book, Bettas aren't really ready to mate until the bubbles are bigger than the size the fish normally makes. But you know, I'm starting to think that these fish-book-writing people don't have that much better of an idea about what the fish want than I do after only staring at my fish for a chunk of time each day. All I know is, my fish is a bubble-making Fishfish.

I also suspect he can see his reflection in the side of his bowl. He swims up to the side of the bowl, looks at it very intently, and flares his fins. He also likes a certain tight spot behind the fake plant in the bottom of his bowl. If he hasn't been back there in a while, he swims over to it very cautiously, and then flares his fins like mad, just to make sure no one's snuck back there when he wasn't looking.

In case anybody is interested, here are the major events in this year's Formula One season so far. In the second race of the year, young major threat Kimi Raikkonen had an accident in the very first lap, making his car look like it had been stomped on, and though he was unhurt he was out of the race. In the third race, seasoned 7-time champion Michael Schumacher bounced his Ferrari off one wall and then another in the 32nd lap, totaling his car. Your Apple Lady's favorite and last year's champion, Fernando Alonso, won the first and third races, and he came in second in the second race.

So Alonso has an early lead in the drivers points race with 28 points. At 14 points, Alonso's teammate Giancarlo Fisichella is tied for second with Raikonnen, the formidable Finn. Schumacher is not far behind, tied for fourth, with 11 points.

The next race is coming up on April 23, in Europe's third smallest state, San Marino, in central Italy. The racetrack and town are called Imola, and both are near the birthplace of the Ferrari, the Lamborghini, and the Maserati. Tickets for the race -- if you can still get them -- are going for a mere $128 for one seat in general admission to about $875 for a seat in a prime location. If you'd rather wait, you could go to the fifth race in Cologne, and pay only $113 for a 3-day pass to general admission. A bargain!

Last night, one of my favorite movies was on TV, Night of the Iguana. It's one of those 1960's black and white classics that just tear you to pieces. I think it's fantastic. Or, I should say, excellent.

It's based on a Tennessee Williams play, for one thing. It stars Richard Burton as the just-shy-of-defrocked Rev. Dr. T. Lawrence Shannon, who has been reduced to giving cheap bus tours of Mexico. Dr. Shannon is being hounded by a dim but beautiful and excitable young girl, who is under the aegis of a harpy named Judith Fellowes (played by Grayson Hall). To escape them and find some solace, Dr. Shannon runs to a seaside resort operated by the dynamic Maxine Faulks (Ava Gardner). While he is trying to duck Ms. Fellowes' wrath, the unflappable but highly sympathetic Hannah Jelks (Deborah Kerr) arrives, flat broke, with her 97 year-old grandfather who also happens to be a poet. There are also two Mexican cabana men, a.k.a. "beach boys," who go around playing maracas and trapping an iguana. You can see the possibilities. It's about people trying to endure the spooks, the blue devils, the nights of iguanas, trying to find some kind of solace and comfort in other people. It's magnificent. 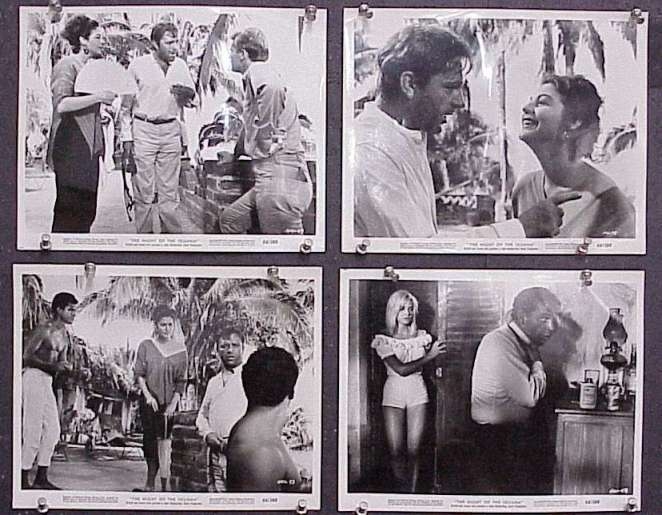 
I decided, this time through, that I really liked Ava Gardner. She gets pretty dramatic in this role, flips her hair around quite a lot, but it suited her character. In this role, she's brash yet comfortable, walks around barefoot, and is equally at ease whether she's pushing a cocktail cart, shaving a man's face, or dropping headless dogfish into a pot of boiling water. I decided I wanted to watch another movie she was in.

But first, a few facts about her life. Then I'll list some movies and let you know which one I think I want to watch next.

Gardner looking sultry in The Killers
(Photo from The Palace)

Or I might watch another Tennessee Williams play-turned-movie, perhaps The Glass Menagerie, which I've never seen.

Want to see a movie of hers for yourself? Check out TV-Now's schedule of Ava Gardner's movies on TV.

Sources
IMDB, Ava Gardner
The Ava Gardner Museum
The Life of Ava Gardner
Posted by the apple lady at 1:12 AM No comments:

In the past few months, many of my friends and co-workers have quit smoking. Hooray and congratulations to you!

One of the questions that an ex-smoker-still-friend has asked is, how long does it take for your body to heal itself from the damage smoking has done to it? What stages or processes does your body go through in recovering from smoking? He particularly wanted to know, how long would he be coughing up goo?

These are the ashy and blackened lungs of someone who was a smoker for an unknown number of years.
(Photo from Premier Exhibitions, at National Geographic's site on the "Bodies" cadaver exhibition that was on display at Florida's Museum of Science and Industry in February 2006)


First, some of the risks you incur when you take on the smoking habit: 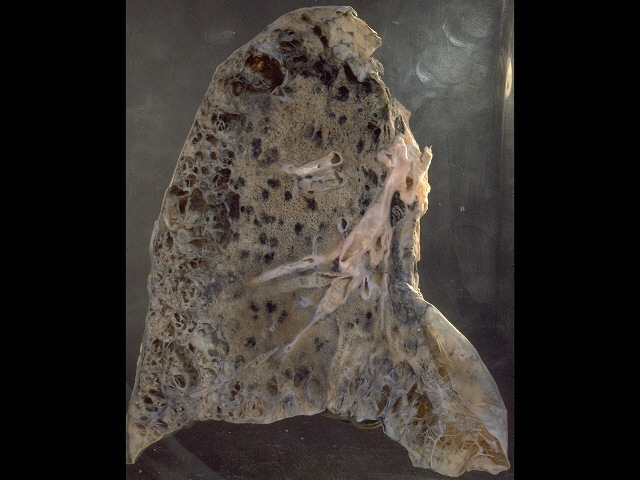 
Now here's how your body heals itself and slowly moves away from those bad and nasty diseases. The following time markers represent the amount of time elapsed since smoking your last cigarette.

A nice, pink, healthy set of lungs
(Photo from NeverSmokeAgain.com)

Sources
CDC, Within 20 Minutes of Quitting poster
CDC, Benefits of Quitting poster
State of New York Department of Health, The Truth About Cigarettes: Break Loose!
Antonia C. Novello et al., US Department of Health and Human Services, Centers for Disease Control, The Health Benefits of Smoking Cessation: a report of the Surgeon General, 1990 (this pdf file is huge, weighing in at 627 pages).
Posted by the apple lady at 1:31 AM 3 comments: