A lot of people have a lot of opinions about Easter.  I have mine, you have yours.  But one thing we can all agree on is Easter candy.  So here are your fast Easter candy facts to have at the ready as you're sitting around with friends & family this weekend, gnawing the ears off some hapless chocolate bunny.

The bunny might be hopless too, since it's chocolate. Hahahaha!

There's one marshmallow Peep born every 6 seconds.
(Photo from Buzznet)

What's the creme in those Cadbury eggs made of? Sugar & water. That's it.
(Photo from Buzznet) 
Sources
Do Something.org, 11 Facts About Easter
ABC15 Arizona, Easter candy: 9 facts that may surprise you
ABCNews, 90 Million Chocolate Bunnies and Other Fun Easter Facts
Chicago News Tween US, Hunting for Easter egg trivia? Find 11 fun facts here
Posted by the apple lady at 2:11 AM 1 comment: Links to this post

I've been meaning to do an entry on the La Brea Tar Pits for quite some time.  A recent news tidbit about bee fossils from the Tar Pits reminded me, so now seems as good a time as any.

To go along with that news, here are a few facts about the tar pits:

Also, this is the kind of picture I've always seen of the La Brea Tar Pits.  Enormous animals duking it out in some ancient wildnerness, teetering on the edge of the tar pits and about to fall in and become fossils for us to discover centuries later.
(Image from Wikipedia) 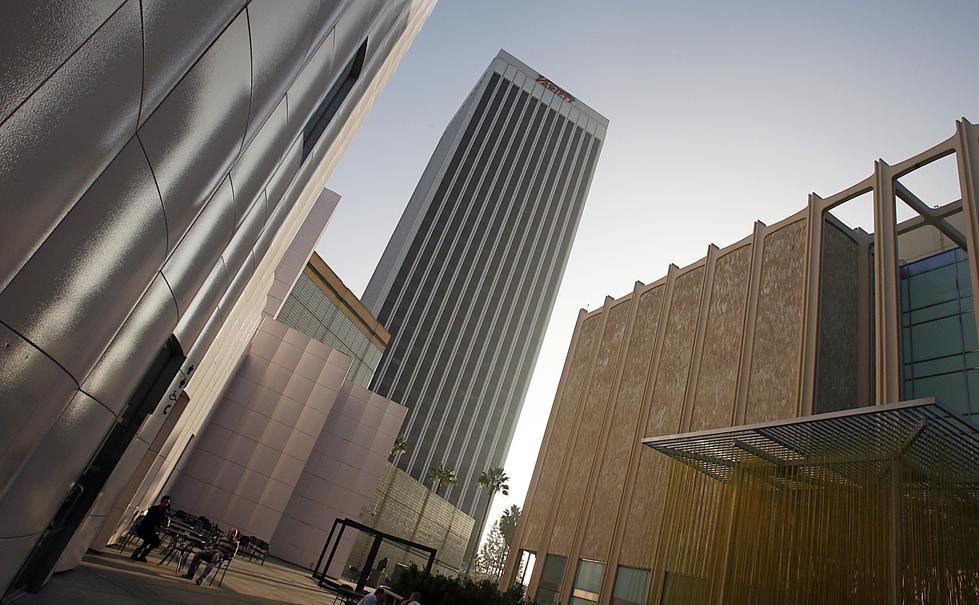 One of the many modern-day structures on Wilshire Boulevard: the LA County Museum of Art
(Photo by Luis Sinco at the LA Times)

A popular tour route of Los Angeles and Hollywood, including stops such as Paramount Studios, Melrose Avenue shopping, the Chinese Theatre, Beverly Hills -- and the La Brea Tar Pits, (down at the bottom of this map).
(Map and tour from City Discovery) Present-day pictures of the tar pits still look rather wilderness-y, with statues of giant now-extinct animals duking it out in the tar pits.  Oh, but there's a modern-day building tucked behind those bushes.
(Photo by Roger Weller from Cochise College) Skull of the saber-toothed "tiger."
(Photo from the University of California Museum of Paleontology)

This is what scientists at the La Brea museum think the sabertooth tiger might have looked like. This is a life-sized puppet, created with help from Jim Henson's Creature Shop.
(Photo from the La Brea Page Museum)

Artist's rendering of what the Camelops may have looked like.
(Drawing from the La Brea Page Museum) 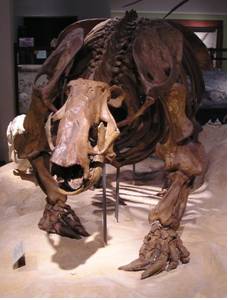 Artist's reconstruction of a Harlan's Ground Sloth. This one looks quite friendly.
(Drawing from the La Brea Page Museum)


For a really good pictorial overview of the history of the Tar Pits from 40,000 years ago to today, check out the La Brea Page Museum's Timeline.

Apple #668: Yellow Sac Spiders, Mazda6s, and the Smell of Gas

All right, you lazy copycat reporters.  I'm calling you on your mindless repetition of other sources without doing any fact-checking of your own, right here and now.

There's a story getting repeated like mad by every major news source, minor news source, TV news page, web newsjunkie page, and car fan blog out there.  They're all saying the same thing over and over so it probably doesn't matter which source I quote, so I'll just pick one.

[EDIT: Since search engines are picking up the portion of this entry that repeats the untrue statement, I am going to amend the news article so that it is factually correct.]

The 2014 Mazda6 -- not included in the recall.  The recall only covers some 42,000 Mazda6s made in 2010-2012.  But all you reporters who are reporting repeating this story had BETTER look at things differently.
(Photo by Aaron Gold, from About.com Cars)

Here is the story from the AP Newswire, picked up and reposted verbatim by ABCNews [and edited to be correct, by me]:

Mazda is recalling 42,000 Mazda6 cars in the U.S. because spiders can weave a web in a vent hose and cause the fuel tank to crack.

The recall involves cars from the 2010 through 2012 model years equipped with 2.5-liter engines.

The yellow sac spider, which is [NOT NECESSARILY] attracted to hydrocarbons, builds webs [SACS] that [MAY] cause pressure to build in the fuel tank. That increases the risk of fuel leaks and fire.

Mazda recalled cars in 2011 for the same problem. It put covers on the vent line, but has found spiders can get past them.

Mazda will update the cars' software for free beginning this month to ensure that the fuel tank pressure doesn't build up.

Mazda says no injuries or fires have been reported due to the issue.

SPOILER: I can find no evidence whatsoever that yellow sac spiders "are attracted to hydrocarbons" or "like the smell of gas" or any other such anthropomorphic explanation for their behavior.  So how many other elements of this story are untrue, and continuing to be repeated as if they are?

Of the innumerable sources reporting repeating this story, many have headlines such as

I thought, "This is interesting, a spider that likes the smell of gasoline.  I want to know more about that."  So I did some searching about the yellow sac spider.  Here are some of the basic, most salient facts: The yellow sac spider is very common.  You probably recognize it by its pale body and the dark tips at the end of its legs.
(Photo from Jonesblog)

One example of the kind of Photoshopped images showing the yellow sac spider in a gas tank.
(Image from Free Republic)


None of the pages describing the yellow sac spider in & of itself said anything about the spider liking the smell of gasoline, or hydrocarbons, or hydrogen oxide.

Let me repeat that but in a slightly different way: all of the entomology/spider/species resources I checked said NOTHING about this type of spider liking the smell of gasoline. 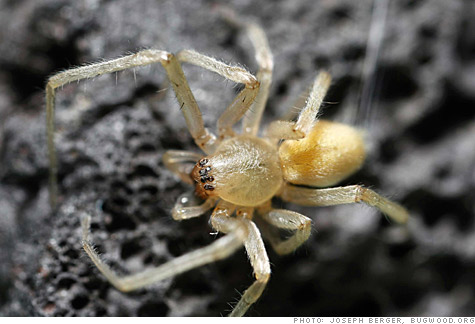 Yellow sac spiders do have one unusual physical feature: they have 8 eyes, 2 more than most spiders have.
(Photo by Joseph Berger, from Bugwood.ord, sourced from CNNMoney)


The only sources I found that said anything about the yellow sac spider in particular liking the smell of gasoline, or hydrocarbons, or hydrogen oxide, were all news articles or blog posts about the Mazda recall.

Seemed pretty fishy to me. I wondered, did someone make a factually incorrect statement at some point, and everyone has just kept repeating that statement without checking it, for years?

So I started looking into some of the supposedly factual statements in the news release.

For example, you may have noticed that the AP story I quoted above (and all the others robotically following suit) says that the spiders in the Mazda gas tank are building webs and it's the webs that are causing problems.  But, as we've learned, yellow sac spiders do not build webs, they build sacs.

Is it the news sources that are incorrectly describing what the spiders are doing?  Maybe the original information from Mazda was more specific and accurate.  So I found the recall notice.

Diagram showing Mazda's evaporative canister and other parts of the fuel system where the spider may build its home.
(Diagram from Engine-Codes.com)


Well, maybe Mazda are just trying to be general in their description, to use language everybody will understand, rather than to use something more specific like "spider sacs" or some such.  Or maybe the thing they were seeing in the fuel line was really a web, and not a sac.  So maybe this particular spider isn't really a yellow sac spider at all.

This is the thing that a yellow sac spider builds: a sac.  Here, a female is tucking her eggs into it.
(Photo from Forestry Images)


So where did the assertion that this spider is a yellow sac spider come from?

So it is definitely the yellow sac spider that is spinning its webs building its sacs inside Mazda6 cars.  I'm going to give Mazda the benefit of the doubt on this point, and say that they use the word "web" in their recall notice so as to be easily understood, when they more accurately should have said "sac."

But we still have the question that got me started on all of this: where did this business of yellow sac spiders liking the smell of gas come from?  That, after all, is the reported reputed reason why they are building their webs sacs in the fuel lines of Mazada6s.

"are found throughout the nation, and there is no particular reason why they would choose the inside of a car body to hang out, rather than some other crevice, says Rick Vetter, a researcher at the University of California-Riverside."

"While it's very rare, this spider's distinguishing characteristic is that it likes the smell of gasoline, caused by the hydrogen oxide," said automotive journalist Mitsuhiro Kunisawa. "Once it smells the gasoline from outside, it will go inside." 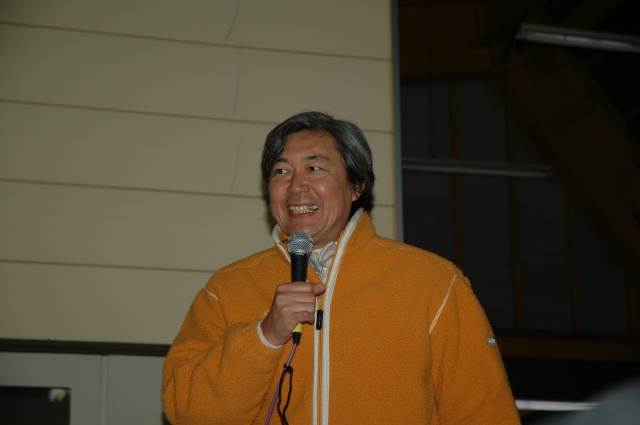 Mitsuhiro Kunisawa.  A decent enough guy, I'm sure.  Loves reporting about cars.  But maybe not the most authoritative source on the habits of spiders.
(Photo from SixStar-ism)


Lazy.  Lazy, sloppy journalism. Perpetuated through an entire news cycle in 2011, and then picked up and perpetuated again in 2014.

Now here are some actual facts:

The Flat Rock assembly plant is no longer owned by Mazda.  As of 2012, it now belongs to Ford. They switched to building new Mustangs and the 2013 Ford Fusion sedan.
(Image from Mustangs Daily)

Spiders who like hydrocarbons
ASBMB Today, Q&A with Stefan Schulz
Richard J. Adams, Field Guide to the Spiders of California and the Pacific Coast States

Posted by the apple lady at 9:43 PM 2 comments: Links to this post