I came across the name of this town recently. What a name, eh?

I decided that I would finally find out why it is called Medicine Hat, and some other sundry details about it.

These cows live in Medicine Hat
(Photo from Pahl Livestock)

As some of you may be aware, the Blogger folks are updating their service and adding a lot more functionality. All new blogs will be made using their new (and easier!) Beta format. Existing blogs require some tweaking to make the adjustment to the new format. I'm doing some housekeeping things to make that migration happen. One of those things is adding subject labels to each post (see the bottom of each entry).

But I know that, for most of you, that is total yawnsville. In the meantime, I invite you to peruse some season-suitable entries I put together in the past, including


I'll have a new entry up here soon, I promise.
Posted by the apple lady at 11:13 PM No comments: Links to this post

Brace yourselves. Some important holidays are coming up.

Sure, there's Thanksgiving, but in November, there is also so much more. You'll be glad to know that you can send e-greeting cards to your loved ones for just about every one of these "days."

For example, did you know that, among other things, November is

I have the suspicion that these things are all mysteriously related.

Did you know that the pomegranate is originally from Iran and the Himalayas?
Babylonians chewed the seeds before battle, hoping to be made invincible.
(Photo from The Food Paper)


It is also currently


Coming up soon are the Better Conversation Week, National Family Week, and National Game & Puzzle Week (organized by the people who are now concentrating more on the Million Minute Family Challenge).

There are also very special individual days in the month of November.

Yesterday (the 15th) was the National Bundt Pan Day, and I did not make a Bundt cake, but I'm sure somebody somewhere did. Yesterday was also the I Love to Write Day, and I did actually write something yesterday.

Coming up, World Hello Day is on the 21st, before Thanksgiving. To celebrate, say hello to ten people. The 24th is Flossing Day, which is always the day after Thanksgiving. So you can say hello to 10 people, eat your turkey, and then floss afterwards.

Some people make various crafty things using dental floss. This necklace, made of dental floss and plastic bloody teeth, was an entry in an ugliest necklace contest.


The 19th is Have a Bad Day Day. It is intended to allow retail workers to wish people, "Have a bad day," instead of the usual alternative. This holiday is actually copyrighted by Thomas & Ruth Roy. Copyrighting a holiday seems in keeping with the whole "have a bad day" concept.

If you actually do have a bad day on the 19th, fear not, for Name Your PC Day follows immediately on its heels and will surely be a balm to your bad day. Although this one is copyrighted, too. :(

But perhaps most important of all, the 24th is National D.B. Cooper Day.

Police sketch of Dan "D.B." Cooper
(Image from the FBI)

So relax, eat your turkey and your pie, floss your teeth, and then if you're so inclined, you can wing out to Arizona and maybe meet a famous hijacker! You might want to chew some pomegranate seeds before you go, just in case he actually shows up.

[For updates about the D. B. Cooper case, check out this more recent Daily Apple.]

Someone at my job was telling me some pretty interesting things about player pianos. For instance, some of the music was composed only for player pianos. It was "printed" on the rolls that were used only with player pianos, but not recorded in any other form. So the only way to listen to this music was with a player piano. That music is all but lost, now that the player piano is essentially extinct.

I found this sort of fascinating, so I thought I'd see what else I could learn about player pianos.

Diagram of the inner workings of a player piano. A little more complex than a conventional piano.
(Diagram from Player-Care.com) 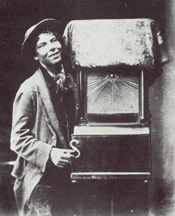 One type of barrel piano. Many of these were larger, more like the size of a popcorn cart, with handles like a wheelbarrow.
(Photo from the Player Piano Page)

As I was pumping the gas, I wondered, what exactly is the difference between Regular and Mid-grade and Premium? How much better is Premium, really?

Pumps like these, ready for all three grades of gasoline, are the norm.
(These particular pumps are available for purchase from Ken-Co)

Which begs the question, what's engine knocking, and why should I care?

This is a piston that's been essentially shot through, all because of engine knock.
(Photo from Lawrence Livermore National Laboratory)

Here's what it comes down to: grades of gasoline will affect how rapidly your car can reach higher speeds, or its horsepower. You won't get better mileage if you use a higher grade of gasoline.

So, in essence, the importance of gasoline grades is all but obsolete. And all those times I bought higher grades of gas, thinking I was doing a good thing for my car, I was just another sucker on the vine.

These decades, what matters more is the quality of gasoline you purchase. In other words, it matters which gas station you go to, not what you buy once you're there.

Sources
Energy Information Administration, Definitions of Gasoline Grades
About.com, Chemistry, Before You Buy Gasoline or Petrol
About.com, Chemistry, How is Gasoline Made? What Are Octane Ratings?
Don't Waste Your Money, Gasoline Grades
Edmunds.com, Do You Really Need Premium?
Environmental Protection Agency, Gasoline Detergent Additives Enforcement and Recordkeeping Requirements, October 1997
Environmental Protection Agency, PA EPA Gets Gasoline Certification Program, 06/28/96.
American Petroleum Institute, Gasoline - Is It All the Same? What about Octane?
eHow, How to Purchase the Right Gasoline
Posted by the apple lady at 11:35 PM 1 comment: Links to this post