I've had about 9,000 things going on lately and the Daily Apple has had to take a back seat.  Now I'm about to leave for the long Memorial Day weekend, so I won't be here to post my usual Sunday entry once again.

The other day I was out walking in the woods, which I haven't done in a while, and I noticed how much some of the plants had grown since the last time I'd been there.  That reminded me of time lapse videos I've seen of plants growing, taking over things at what seems like lightning speed.  I thought that might be a good metaphor for what seems to have been happening with the Daily Apple lately -- while I'm away, you can watch the plants grow! 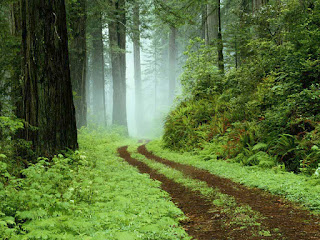 How long do you think it would take for the plants to take over and erase that two-track path?
(Photo from Sustainability Campaign)


Of course it wouldn't be the Daily Apple if I didn't provide some informative facts for you.  So I'll start with David Attenborough, who explains a bit how vine-like plants grow the way they do:

Here are some pepper plants growing and doing the nutation dance. The person who made the video isn't entirely sure why the plants on the right are growing faster. One side is Jalapeno peppers and the other side is Cubanelles, so that may account for the difference, or he said he may have planted the ones on the right a day earlier:


Here's a time lapse video showing phototropism, made by third-grader Cameron Wright.  No, it's good! He tells you at the end how he made the video. And Cameron himself makes an appearance!


Now that you've got a few facts under your belt, let's see some more of the sped-up growth of all sorts of plants.

Here's more of David Attenborough, attributing all sorts of nefarious anthropomorphic intent to the plants:

In this one, the rose fascinates me, how many changes it goes through:

Here's a day in the life of some tulips. They bloom and then as the light fades, they close up again slightly (phototropism!):


Now, I know that fungi are a whole different kettle of . . . spores, but I think this one is pretty cool.  These are blue oyster mushrooms:


It seems natural to provide you with some instructions on how to make your own time-lapse video of plants growing. But it seems to be a pretty involved process, with all sorts of variables depending on what kind of equipment you have.  So I'll recommend a few resources that seem to be good:
The BBC's Timothy Allen's tutorial on time lapse photography
Creative Pro's guide to making your own time-lapse photography system (2006)
Some basic suggestions from PCWorld about how to make a simple time-lapse movie
How to make a time-lapse movie if you have a DSLR camera, from LifeHacks


I'll give you one more video to close with.  This one shows plants growing and also snails wandering around over the plants. It's funny to see the snails moving quickly.

Apple #582: The Truth about Ninjas

I have a new pair of shoes that are black, slip-on, with fabric uppers and soft soles. They're very comfortable and quiet when I walk around in them, so I've taken to thinking of them as my ninja shoes.  I've said such phrases to myself as, "Where are my ninja shoes?" and "I'll wear my ninja shoes today," often enough that I started to think about ninjas.

There are of course all the very fun but exaggerated depictions of ninjas as stealthy, black-clothed, face-masked, sword-carrying fighters who drop in, slice an enemy to ribbons, and vanish immediately. It's all very mythical and tall-tale.  But those depictions must have come from somewhere.  Were there real ninjas once upon a time?  Were they anything like the way we think of them today?

Ninjas as we think of them today: black-suited, faceless, armed with throwing stars, and so full of secret mysterious powers, they're not really real. Except to be really awesome!
(Image from Alt World) 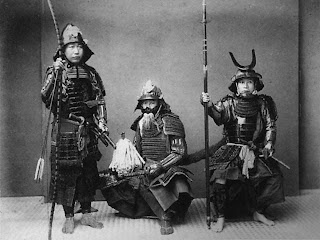 Samurai warriors in their armor. I bet they made a lot of clanking and banging when they walked around. What does the Wizard of Oz call the Tin Man?  You clinking, clanking, clattering collection of caligenous junk! That's probably what ninjas thought of samurais.
(Photo from Music Lovers) The box in red shows the Iga province and part of the Omi province where the Ninjas lived.
(Map from Iga & Koga) Ishikawa Goemon is a cult hero, thanks to Kabuki plays and more current anime tales. Some people say he was a ninja. Others say he was simply an ex-samurai turned thief with a band of robbers who stole from the  rich and wound up getting boiled to death.
(Image from Iga & Koga)

Hattori Hanzo is another figure who is said to have been a ninja. Actually, he was born a samurai, and he enlisted the help of ninjas from the Iga province. His legacy today is that he became a master ninja, but that's probably myth-making after the fact.
(Image from Wikipedia)

Women in Iran studying Ninjutsu say they like it for the way it balances body and mind, strength and agility.
(Photo from the Daily Mail)

An array of ninja weapons. Some say this many weapons is a more recent attribution. Others say ninjas did use some weapons like these, but mainly for distraction or catching the enemy off-guard. Since most of these are small and easily concealed, and since concealment is practically a ninja's middle name, I'm guessing they did use weapons like these.
(Image from Only HD Wallpapers)

Smoke was one of the ninja's tools. But whether it was used as a disguise as shown here is up for debate.
(Photo from The Art of Ninjutsu)

OK, now that I've given you the historical facts, I can't resist. I have to share with you some of the ninja lore that's out there.

Ninjas can kill anyone they want! Ninjas cut off heads ALL the time and don't even think twice about it. These guys are so crazy and awesome that they flip out ALL the time. I heard that there was this ninja who was eating at a diner. And when some dude dropped a spoon the ninja killed the whole town.

There is also a long-standing debate raging online about who would win, ninjas or pirates.  Since ninjas invented the internet, this is pretty much a no-brainer.  Obviously the whole thing was created by ninjas only to show their dominance over the weak one-eyed pirates. Duh.


Sources
Kallie Szczepanski, History of the Ninja, About.com
WestLORD, The Art of Ninjutsu
Facts and Details, Ninjas in Japan: History, Training, Technology and Tactics
The Smoking Jacket, Stuff You Should Know: Ninjas
Listverse, Top 10 Myths About Ninjas, April 23, 2009
Ninpo/Ninjutsu History
Shinbukan, A Brief History of Ninjutsu
Posted by the apple lady at 12:58 AM No comments:

Yes, I'm admitting that the Daily Apple is now pretty much a Weekly Apple.  Ah, well. Such is life.

Now. On to the good stuff.  Ice cream. 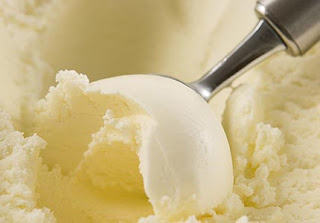 Vanilla has been the champion flavor since maybe forever.Diving into a good vanilla can be pretty luxurious.
(Photo from in love godiz world)

Every once in a while, I like a good strawberry ice cream. With actual strawberries. Yum.
(Photo and recipe from Singapore Local Favorites)


Ice Cream  vs. Other Frozen Desserts 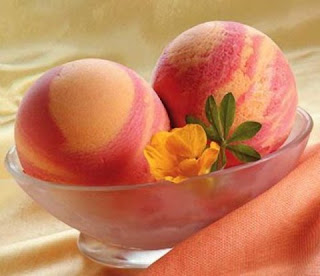 This rainbow sherbet sure is pretty. You bet.
(Photo from FrozenHeart at Sodahead)

I am Marco Polo. I bring you . . . sherbet!
(Photo from Ian's page at Riverdale Elementary)

Catherine de Medici. I really have to learn more about her. Especially since she liked ice cream.
(Image from the History Channel)

This is the hard part of making ice cream: it has to be frozen and whipped to put air into it -- simultaneously. This process is what keeps a lot of people from making their own ice cream, except on rare occasions. Here the Waltons are hand-cranking it in their ice cream barrel.
(Still from DelsJourney)

After all those serious historical figures and whatnot, I thought it was time for a banana split.
(Photo from the Tropical Ice Cream Cafe)


Finally, it would be a crime not to mention Jeni's Splendid Ice Creams, which is increasingly recognized as some of the best ice cream available today. You can order it online or buy it in more and more stores these days, or you can get her recipe book and make it yourself: Of her flavors, I'm not sure whether the Brambleberry Crisp is my favorite, or the Riesling Poached Pear sorbet. Yes, it's a sorbet, but it's that good.

This is a scoop of Jeni's signature flavor, Salty Caramel.