I regret that I have not been able to finish my Daily Apple for Sunday.  I have one in the works, but as I've also been baking cookies like a fiendish baker all weekend and packaging them up to send out for Christmas presents tomorrow, I haven't been able to get back to the Daily Apple.  Hopefully I'll have the entry done tomorrow night.

In the meantime, here's a clue: One of the enduring mysteries of Christmas is egg nog.  I know it involves liquid eggs and the optional alcohol, and I've even drunk some a time or two.  But it was the stuff from the grocery store so I wonder, how representative of true egg nog is that?  What is the nog?  And how did someone come up with the idea of drinking eggs as a festive thing, anyway? If the nutmeg on top of your eggnog looks like this, you have too much time on your hands.
(Photo from Why'd You Eat That?) Posset.  The name sounds totally unappetizing, but when you see it here with candied orange peel on top, you have an entirely different reaction, don't you?  This is the ancestor of eggnog.
(Photo from Why'd You Eat That?)


Store-Bought versus the Home Version

In this recipe, she combined her eggs, milk, and sugar, then heated to 170-175 F.  She said it took about 25 minutes for it to reach temperature.  And you must stir constantly.
(Photo from Tasty Kitchen) Another eggnog by Morgenthaler.  This one uses tequila and Amontillado sherry.  Yes, the stuff in the Edgar Allan Poe story.
(Photo from Jeffrey Morgenthaler) 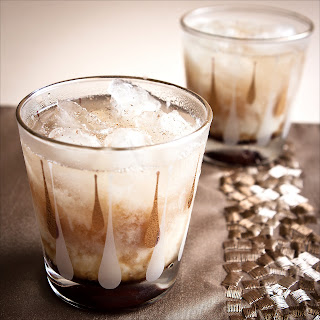 Eggnog for the beach: the nog plus vodka and Kahlua over ice.
(Photo and recipe from A Beach Home Companion) 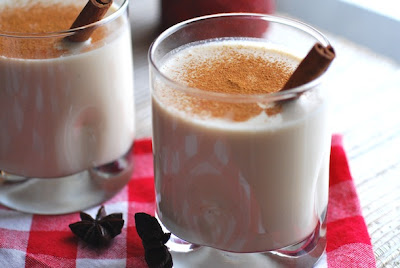 Puerto Rican eggnog, or coquito, is made with rum and coconut milk.  The coquito pictured here was also made with evaporated milk.
(Photo from Always Order Dessert) Non-alcoholic eggnog.  Pretty much the same but sans liquor.  How you make that little whipped cream castle, the recipe doesn't say.  Probably it's all in the wrist.
(Photo and recipe from allrecipes.com)

Greetings, faithful Daily Apple readers!  Now that our calendars have turned the page to December, I can start giving you Christmas-related posts.

Who is this Vince Guaraldi guy and how is this a Christmas-related post you ask?  Hit play and within one second, you'll know. 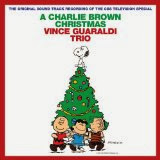 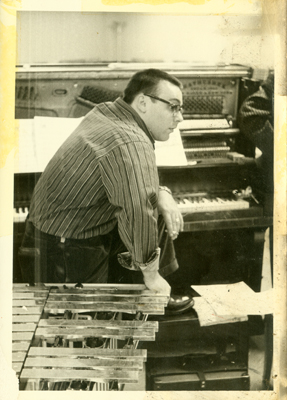 Vince Guaraldi early in his career, or at least, before he adopted the facial hair.
(Photo from Derrick Bang's Five Cents Please)

"It was more than scary," Guaraldi said of working for Art Tatum as an intermission pianist. "I came close to giving up the instrument, and I wouldn't have been the first after working with Art Tatum." 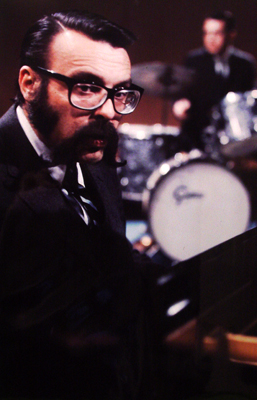 I'm not sure when this was taken, but now we're getting into the facial hair.  Perhaps it was around this time that fellow jazz musicians started to call him Dr. Funk.
(Photo from Derrick Bang's Five Cents Please)

"Vince is always pulling splinters from his fingers, driven in when he claws at the wooden baseboard, behind the keys. His fingernails are perpetually split and ragged from hitting that wood. He fingers all wrong when he makes runs and plays chords. All wrong, that is, from the standpoint of efficiency and ‘piano technique.’ He doesn’t make the runs the way it says you should in the Czerny exercise books. He makes the runs the way it fits his stubby little hands. And if he finds shortcuts, and ways to play something with this thumb that ought to be played with his middle finger, he plays it with his thumb. But I’ve noticed over the years in jazz that almost all the good ones do it all wrong, because it’s the sound that matters—and the sound, with Vince, is beautiful and moving." It was after "Cast Your Fate" became a hit that Guaraldi began to make all sorts of recordings.
(Photo from Dadrock) 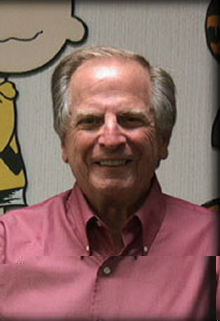 Television producer Lee Mendelson. You wouldn't take this guy to be a jazz lover, would you?
(Photo from The Bluegrass Special)

"I was blown away!" Mendelson said. "It simply SOUNDED like the characters in Peanuts. He finished playing and got on the phone. 'What do you think?' he asked.'"It's sensational, perfect! Do you have a name for it yet?' 'I thought we should call it "Linus and Lucy,"' he replied. Little did Vince and I know what that would mean to our futures." (from Snoopy and the Gang)

CONFIRM SALE OF CHARLIE BROWN FOR CHRISTMAS TO FOR DECEMBER BROADCAST AT YOUR TERMS WITH OPTION ON SECOND SHOW FOR NEXT SPRING. GOOD GRIEF!

This iconic moment from A Charlie Brown Christmas would soon be in everyone's future.
(Photo from Houston Press)

Guaraldi "captured something about the lilting quality of the kids," remembers Jean Schulz, Charles' widow. "The way they walk and bounce a little bit — he captured that in his music." 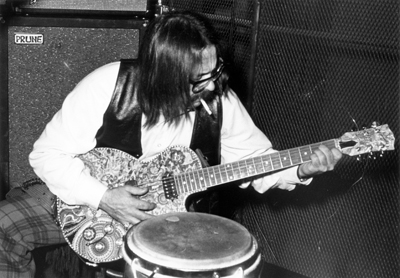 "After concluding the first set at Butterfield's Nightclub in Menlo Park, California, Guaraldi and drummer Jim Zimmerman returned to the room they were staying in that weekend at the attached Red Cottage Inn, to relax before the next set. In Zimmerman's words, 'He was walking across the room and just collapsed. That was it.' His cause of death has been variously described as a heart attack and/or an aortic aneurysm. Guaraldi had just finished recording the soundtrack for It's Arbor Day, Charlie Brown earlier that afternoon."

(Album cover and album itself from All Music)

"I don't think I'm a great piano player," Guaraldi once said, "but I would like to have people like me, to play pretty tunes and reach the audience. And I hope some of those tunes will become standards. I want to write standards, not just hits."