Today I saw a little video on facebook of an elephant picking up a couple pieces of trash and putting them into a trash can.  I can't find the video now, no idea where it was filmed or any context for the elephant doing this. But it got me thinking about elephants.

You may remember an entry I did a while back on Elephant Feet. I just re-read that entry, and there's a lot of interesting stuff in there that I had forgotten.  Tracts! Varying numbers of toenails!

Anyway, I really like elephants. Fascinating, and rather marvelous that they've put up with us as long as they have. They're probably the most recognizable animal of all, and we think we know all the basic things there are to know about them.  So I want to put together some facts about elephants that maybe you don't already know.

A herd of elephants in the forest. Look how closely together they're all standing. Nobody but nobody is getting past them. African forest elephants are now considered to be a completely separate species than African savanna elephants.
(Photo from Endangered Earth)

Looks like that largest elephant is probably left-tusked.
(Photo from WildAid)

Holy bananas, that's an enormous animal. This is Satao, a bull elephant who has coated himself in red dust. Sadly, Satao was killed for his ivory in 2014. Unfortunately, you can't really talk about elephants without talking about the killing-for-ivory.
(Photo from Colorado State University, sourced from the University of Oxford) Look at that happy bathing elephant.
(Photo from Pinterest, looks like it was posted by Pat Galipeau in Nepal) Doesn't look very comfortable, does it?
(Photo from Charlie's Crib)

Elephants use their trunks like straws when they drink: they suck water partway up their trunks and hold it, then bring their trunks to their mouths and squirt the water in.
(Photo from Wonderopolis)

I guess this means that the whole time elephants are painting (to please us, mind), they can't smell too well.
(Photo from Listverse)

Video below shows Kandula, an 8-year-old Asian elephant at the Smithsonian zoo, rolling a cube into place to reach food dangling from above. No one showed him how to do this; he smelled the food, found the cube, and put 2 & 2 together.


Video below shows a baby elephant collapsing in a road and several elephants from its herd coming to help. It looks like the baby elephant is having trouble standing, or something's not right with its balance, and eventually the elephants figure out he needs help on one side, and they support him on that side until he's able to stand and walk off the road. This is one of the things I love about elephants: they're so enormous and powerful, but they can be so gentle with each other. 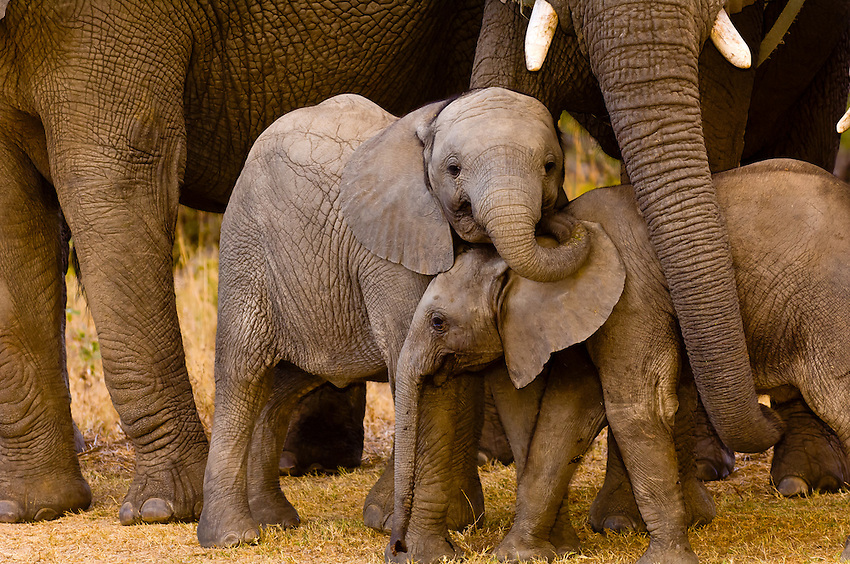 A baby elephant among its herd looks like a pretty good place to be.
(Award-winning photo by Blaine Harrington)


Video below shows Shirley and Jenny, two circus elephants being reunited after 20+ years at an elephant sanctuary in Tennessee. Whoever thought there should be bars between them did not know much about elephants. The way they embrace each other with their trunks at the end, you can't tell me that's not love.

Sources
Ferris Jabr, The Science Is In: Elephants Are Even Smarter Than We Realized, Scientific American, February 26, 2014
Smithsonian, 14 Fun Facts About Elephants
World Wildlife Foundation, Elephant
Defenders of Wildlife, Basic Facts about Elephants
National Geographic Society, African Elephant
African Wildlife Foundation, Elephant
San Diego Zoo Animals, Elephant (they have a live elephant cam. As I type this at 11:15 at night, they elephants are walking by.)
Fact Slides, 28 Facts About Elephants
Modern Ghana, Do You Know Elephants Stand To Sleep?

The death of Supreme Court Justice Antonin Scalia has prompted all sorts of speculating and bloviating about how the next Justice should or should not be chosen.  In particular, the hot-button question is whether President Obama as an outgoing President should abstain from nominating another Justice and let the next President make the nomination, or if he should proceed with appropriate speed and put forth his nomination as soon as possible.

This is a hornet's nest of political grandstanding and finger-pointing and barbs of all persuasions.  I, your intrepid Apple Lady, am going to don my helmet of information-gathering, enter the hornet's nest, and sort out the fact from the bloviating.  Because this is what your Apple Lady does in the name of knowledge.

The United States Supreme Court. Of the three branches of the US government, this one is my favorite. They wear robes, and they say, Hey, I don't care what you've been doing, from now on, you have to be decent to each other. Most of the time, that's what they say.
(Photo from Wikipedia)

Article II, not shown here in its entirety, but this is where the minimal rule appears about how Supreme Court judges are chosen.
(Image from Simplebooklet) Inside the US Supreme Court. Imposing, isn't it?
(Photo from the Library of Congress. I'd just like to point out that Getty is selling this exact same photo with their name on it and charging people to use it.) Strom Thurmond (R-S.C.). A guy who said some stuff. Including the longest filibuster on record, against the passage of the Civil Rights Act of 1957.
(Photo sourced from Real Clear Politics) Austrian-born Justice Felix Frankfurter told the Senators on his nomination committee that “a nominee’s record should be thoroughly scrutinized by the committee,” but the nominee should take no part in that scrutiny.
(Photo via Separate Is Not Equal)

The upshot: President Obama can nominate whoever he chooses, if he wants to.  But he doesn't have to nominate anybody if he doesn't want to. It's up to him, as the elected President of the United States to decide whether or not to nominate someone. And if people don't like that decision, well, I guess they'll have to reject his nominee, or re-write the Constitution.