[Note from the Apple Lady: I was in the middle of working on this entry when I got the news about Osama Bin Laden.  I realize you're probably not all that interested in the topic of this entry at the moment, but rather than switch horses to a subject having to do with war, I decided to stick with this.  At the very least, I wanted to finish what I started.]

I have had a request!  Daily Apple reader Leopold pointed out that, in the wake of all these storms and hurricanes and tornadoes, there is rubble all over the place.  That all has to get cleaned up, of course.  But, he wanted to know, where does the rubble go?

The destruction surrounding those severe storms is certainly not a happy topic so that might seem to make it not suitable for the Daily Apple, but rubble-removal is the beginning of rebuilding.  Plus, I suspect that the people who do the rubble-hauling largely go unseen.  So this will shine a light on these essential services that most of us rarely think about.

A landfill, it turns out, isn't just a great big hole in the ground, but it's a pretty sophisticated combination of engineering and chemistry.
(Diagram from Runco Environmental)


WHAT THE "STUFF" IS

This is exactly the kind of hazardous situation that gets taken care of first: a downed tree blocking a street and leaning on a power line to boot. This is after a winter storm in Santa Barbara, Florida, in January 2010.
(Photo by Victor Maccharoli from the Daily Sound)

This broken concrete has metal rods in it, which means it isn't considered "clean" or re-usable, so that's probably why it's been piled up together. This is in the aftermath of Hurricane Ivan in Pensacola, Florida, in 2005.
(Photo by Leif Skoogfors from FEMA)

Somebody's going to have to get that mini-van off the top of that other car and the huge tree branch.  That's got to be a specialty job.
(Photo of tornado damage near Beaver Creek, North Carolina from our amazing planet)


HOW IT GETS HANDLED

Vegetation piled along a roadside, waiting for city pick-up. This stuff is what fell down in one guy's yard during Tropical Storm Fay in Jacksonville, Florida, in 2008.
(Photo from Rabid Fun)

It was hard to find a picture of the guys who pick up the trash.  Lots of photos of the trucks, not so many of the people themselves.  These guys work for New Orleans' downtown trash collection service, SDT.
(Photo by Eliot Kamenitz at The Times Picayune)

There's no way a regular city trash truck or some guy with a chainsaw and a truck could handle this enormous tree, felled during the Raleigh, North Carolina tornado.  Time to call the special tree- and stump-grinder guys.
(Photo from active rain) 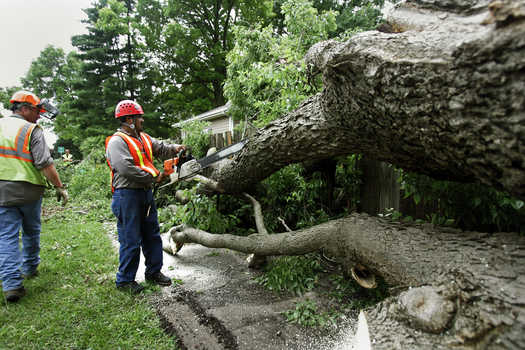 These guys work for VanBooven Tree Care. They're certified arborists and experts in tree pruning and removal. Notice the extra-long chainsaw blade, the special hard hats, and the protective gloves.  They were one company hired to help Kansas City clean up after a storm in 2010. By the way, the majority of injuries related to storm damage happen after the storm, when Average Joes get out there with their chainsaws and try to saw up trees by themselves.
(Photo from VanBooven Tree)

The Bobcat with the claw on it, being used here to pick up storm debris, and the huge Dumpster-like truck are owned by a contractor that specializes in storm debris removal. The stuff they're collecting is debris from Hurricane Katrina in New Orleans.
(Photo from VCM Ventures, Ltd.)

These guys are experts in asbestos removal. They're all suited up as federal regulations require. The thing they're throwing out is a piece of ceiling tile.
(Photo from Asbestos Jobs Info)


WHO PAYS FOR IT
It always amazes me how destruction can happen so fast, in a matter of minutes or even seconds, but recovery and rebuilding takes so much longer -- years longer, sometimes -- and with so much effort.  Here's to all the people who are helping others dig out and rebuild.