Apple #731: Prince and His Entourage

Like so many people, I've been rather stunned by the news of Prince's untimely death. I was never a huge fan, but the man had some serious songwriting skills, and he seemed about to embark on a new realm of creativity, and his music and style and persona were a huge part of the cultural landscape in my formative years.  People who are so famous, whose work and image and music and everything else are everywhere, you forget that they can do something so human as to die. It's kind of a shock. 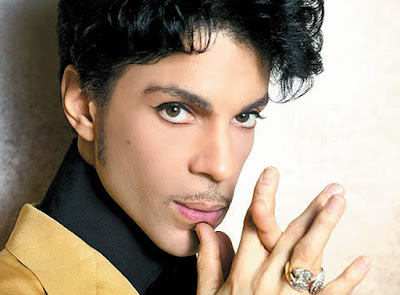 (Photo from this Finnish news page)


Like so many people, I am remembering personal experiences when this man's music was the soundtrack. Dancing to "Purple Rain" with a crush-object who was on the track team. Recording "When Doves Cry" off the radio onto my tape recorder in my bedroom and trying to match his falsetto "Ooh-hoo"s and failing completely. A girl on my softball team listening to "Darling Nikki" on her headphones as we rode the van to an away game and cracking up and passing the headphones around because of how dirty the lyrics were. But my most vivid and complete Prince-related memory does not even involve him, but someone who impersonated him. 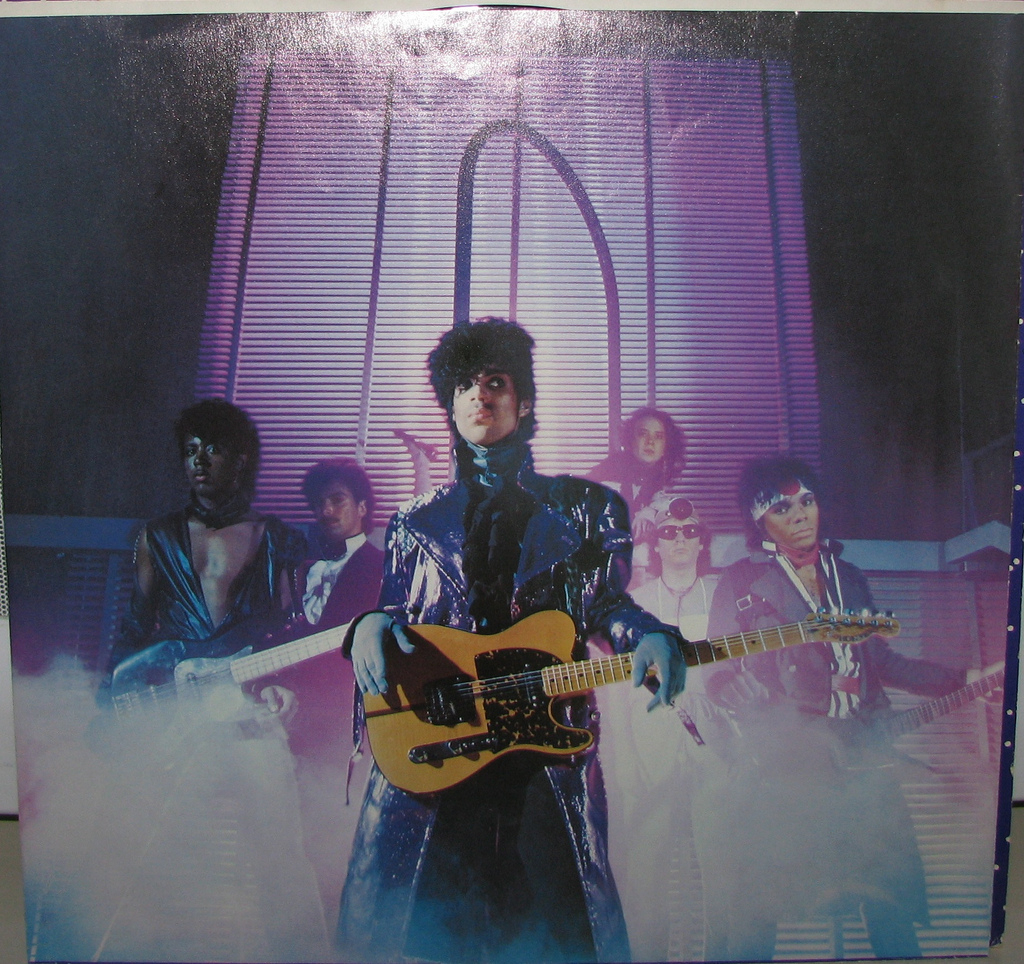 
My freshman year, our high school had a cover-band dance. You could get your friends together, dress up like some famous band, and then at the dance, pretend to be them and lip sync to a recording. One bunch of guys wore taped-up trash bags and they were Devo. A few stoner dudes were a rather disorganized Van Halen. A gaggle of popular girls was The Go-Gos. It was funny to see this person or that person you knew from your math class or wherever, all dressed up and acting the part, but kind of missing the mark and still obviously them.

But then the lights went out in the gym entirely, except for spotlights playing around the door, as if frantically searching for who might enter next.  A buzz of excitement swept through the crowd as everyone speculated about who it might be.  A hum of music picked up over the loudspeaker, and you could feel it thrumming through your body, and the anticipation built. The doors opened, and the spotlights picked out a crew of people, it was hard to make out who they were, there was lace and the flash of necklaces, there was a guy wearing scrubs -- was that David H from my Latin class? -- and he was holding out his hands to keep the crowd from pressing too close.  Excited murmurs went through the crowd. "It's Prince, that's Prince. I can't believe it, it's Prince."

Among the entourage was this skinny dark-haired guy wearing an improbable get-up of a long black shiny coat, white gloves, his hair in some kind of curly pompadour, and a black satin mask over his eyes. It wasn't really Prince, was it?  It sure as hell looked like him.  His crew were leading him to the stage, and it made no sense at all that he was masked and couldn't see a thing, but everyone was going NUTS.  People were screaming and losing their minds and this guy hadn't even reached the stage yet.  But when he did, wearing tight black pants and a white shirt with a huge collar unbuttoned to his navel, people went INSANE. His posse in that motley collection of lace, necklaces, underwear, and scrubs took up their posts at the keyboards and guitars, and they started to play. "Let's Go Crazy," I think it was, and that was exactly what everybody did.

Part of the real Prince's entourage/performance group always included several women who were either musicians, back-up singers, or dancers, or a combination thereof. Often they wore lacy or super-revealing or skin-tight outfits. Here they are performing in Syracuse in 1985.
(Photo from The Dawn Experience)


The guy at the center of all this was not, in fact, Prince.  It was Fran Fazzina, another guy from my Latin class who was of indeterminate race.  In my blindingly white high school, being anything other than white meant you were on the outside looking in.  He wasn't a stand-out in my Latin class in any way.  He didn't say much, didn't do especially well or poorly on our weekly tests, just showed up, did what he had to do, and left.

But after he was Prince, his world changed.  People high-fived him in the hall, they wanted to talk to him, they wanted to be around him.  I talked to him in Latin class and discovered he had a whiplash sense of humor lurking under there, and I couldn't keep up with his ironic wit.  I developed a crush on him.  I still remember the scent of his cologne.  He got invited to parties. There were rumors about parties at his house. People said his house, which was a two-story colonial, had an elevator going up the middle.

Google Fran's name now and what comes up is a poker player living in Los Angeles.  I have no idea if he's the same guy or not.  Interestingly, there are no photos of him.  Just as real-life Prince was very protective of his privacy, real-life Fran seems to be that way too.

But this guy only PRETENDING to be Prince got that kind of reaction.  Imagine what it must have been like for the actual, real and true Prince.

One of the best tributes I've read is from Paul Westerberg, of Replacements fame, whose career grew up alongside Prince's in Minneapolis. When a guy whose talent you admire says of a fellow musician the first time he saw him perform,

I was next to another musician, a couple other guys that were up-and-comers and that thought they were hot shit, and we were watching Prince. The guy turned to me and said, "I'm fucking embarrassed to be alive." And that's how I felt. He was so good. It was like, "What are we doing? This guy is, like, on a different planet than we are." It was showmanship, it was rock & roll, it was fun, it was great. (from Rolling Stone)


I've spent more time with Bob Dylan, and I've got to say that I was more in awe of Prince. (from Rolling Stone)


you know he was the real thing.

People were in awe of his talent, of his presence, of him.  They wanted to be around him, to get close to him and whatever magic he had.

I know that all celebrities have "people" but that seemed to be especially the case with Prince. Pretty much every news article about him mentions his "entourage."  "His people told TMZ he was battling the flu." "Prince's entourage will be questioned in investigation of his death." "In his final years his entourage was smaller than it had been at the height of his stardom. He had a couple of assistants, a manager and, of course, bodyguards. There wasn't a huge entourage of friends hanging around."

I think what made Fran-as-Prince's performance so successful was the presence of that entourage. When he was surrounded by a group of people (by the way, that's what entourage means, etymologically speaking, "surrounded by"), everyone wondered, who is that guy, that he either needs that many people to protect him, or that so many people just want to be around him?

I was going to do a whole thing about entourages, about other famous people and their entourages (Oprah Winfrey, Frank Sinatra, President Obama, Jesus), but I don't want to wander that far from the main subject, which is Prince himself.  One of the things I've been thinking about is what's it like to be a member of an entourage? Do you still feel like you have a personality of your own, or how much of yourself do you give over to this person whom you've dedicated yourself to surrounding?

It was like being around the biggest boss and icon all at the same time. Everyone who worked for him knew him and respected him; they all believed in him and worshipped him. He was just so capable, he was always right, and he really was. (anonymous assistant of Prince's, quoted in ENews)

[H]e had this smile, it's the smile that your dad or your teacher would give you. It was all you needed to say that you've done a good job. That would be enough. (Michael Kronick, Prince's memorabilia manager, quoted in ENews)


But of course the corollary to that is, what's it like to be the focal-point of that entourage?  Are you able to retain your own personality, or how much of your true self becomes subsumed in this version of yourself that you've created and that other people are maintaining for you?  How exhausting is it to try to meet those expectations all day every day, even when you're supposed to be relaxing and out of the limelight?  How are you then able to pull it together and summon the enormous magic that works like mad in front of thousands of people?

The more famous he became, the further and further it would take him away from the person he was before he became famous. I am not sure if anyone really knew the real Prince, we all loved him, but I don't know how much we really knew him. (anonymous friend, quoted in ENews)

I was just watching this video, talking about the rainstorm the night of Superbowl 2007 when Prince performed, and how incredible it was that he was able not just to pull it off but to make it look like the whole thing was planned, part of his show, to be the consummate professional and entertain the hell out of everybody. If you missed the performance in 2007, or even if you did see it at the time, check this out. It's really quite impressive.

They're saying now that Prince was taking painkillers for years, as a way to help him deal with stage fright and crowds. Some people are saying this destroys their vision of him, or how could have been on drugs, he was a Jehovah's Witness.  I say, no one is immune to addiction.  And I say, however talented he may have been, the man was still human.  I say, God bless him for wanting to keep bringing it full-bore to people, even though it cost him more than most of us ever will ever know.


P.S. to David Bowie fans, "Heroes" was on his encore set-list at performances he gave this month.


Sources
If you want to read about other entourages & such
ENews, Inside Prince's Private World: The Man Behind the Legend from Those Who Knew Him
The Bert Show, What It's Like Working With Prince: A Former Member Of Prince's Entourage Calls In
Nozo, What is it like to be part of a famous person's entourage? [blue on black, really hard to read]
The Richest, Ridiculous Jobs of Celebrity Entourage Members
Mental Floss, 7 Entourages That Changed the World
Online Etymology Dictionary, entourage
Celebuzz, Top 10 Worst Celebrity Entourages of the Decade
Wonderwall, Celebrity Cliques: The Stars' Real-Life Entourages
Daily Mirror, This massive entourage is what it takes to bring Barack Obama to Britain
Posted by the apple lady at 1:18 AM 1 comment: