I'm going out of town to be with family for Christmas, so the Daily Apple will go on vacation, too, for a few days.

Have a very Merry Christmas, everyone! 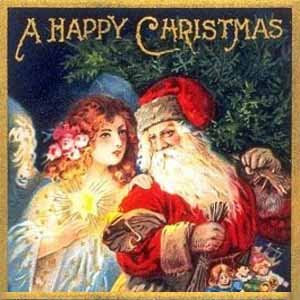 (image from Pulp Jello)
Posted by the apple lady at 2:41 PM No comments:

Continuing my series of entries on Christmas in various parts of the world, I thought I'd go to a climate very different from our last locale, which was Antarctica, and slide up to Australia.

That's Australia, between the Pacific and Indian Oceans. Beneath it, blown way out of proportion, is Antarctica.
(Map from the Australia Bureau of Meteorology)

Australians celebrating Christmas at the beach.
(Photo from ShadowPrincess.com) If the Australian Embassy says that Santa's sleigh is pulled by kangaroos, it must be true.
(Photo from Truth and Beauty Bombs)

Santa arriving in Australia by boat
(Photo from the National Archives of Australia, sourced from the Australian Government site)

That rubber craft in the background was how Santa got to the beach.
(Photo from Tom Wills' Christmas in Australia page)

Pavlova, the popular Christmas meringue dessert in Australia and New Zealand. Of course you'll want to put kiwi fruit on top!
(Photo and recipe from Joy of Baking)

Christmas bush, or Christmas mintbush (Prostanthera lasianthos). This is the less common, pink variety. More commonly, the flowers are white and a little spikier, less bell-shaped.
(Photo from the Australian Plant Society)

Speaking of bells, there is a plant called Christmas Bells. There are two species of them, actually.  This is Blandifora nobilis.
(Photo by Greg Miles on Flickr)

On the first day of Christmas, my true love sent to me
A kookaburra in a gum tree.

I'm going to interrupt my series on Christmas in different countries because I must learn about chapped lips.  Now that winter is here for real, my lips are getting chapped again, and this is bugging me.

If your lips are bloody like this in the morning, it could be because you've chewed on them in your sleep.
(Photo from Health Rookie)


WHAT TO DO: PREVENTION

WHAT TO DO: TREATMENT

Aquafina Hydrating Lip Balm comes in metallic-looking tubes like these or else in white plastic tubes.
(Photo and product available from Walmart)

Murad Soothing Skin and Lip Care, according to Newsweek, was voted the number one lip balm in the country.  I don't know who does these polls, but that's what they said, anyway.
(Photo from  Murad)

B. Kamins Lip Balm with sunscreen.  And, if you wish, with maple flavor.
(Photo from DERMAdoctor)

Palmer's has the additional benefit of being cheaperoo.  You can get a pack of 12 of these for what you'd pay for one tube of the fancy kind.
(Photo from Ishizawa Labs) German version of Eucerin's lip balm. 5.87 Euros or 7.76 US dollars.
(Photo from Bennewitz)

The next place to visit in our little trip to Christmases in different places is Antarctica. 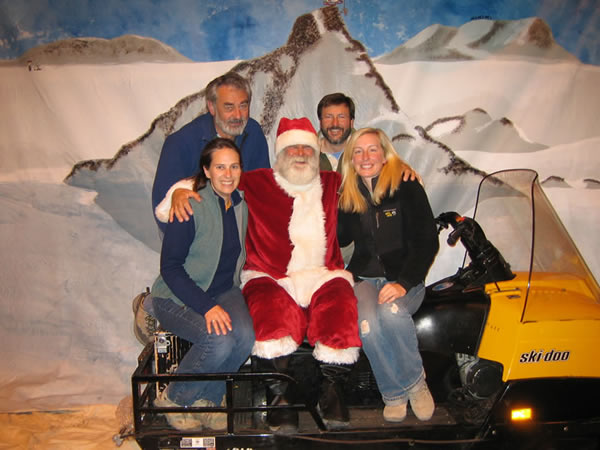 In Antarctica, instead of a sleigh, Santa arrives on a Ski-doo.
(Photo from Professor Eric Hiatt's page about McMurdo Station)

Isn't that nice? The penguins in Antarctica send Christmas cards.
(Cards available from WePrintColor.com)
(Actually, check out what the penguins are really doing on Christmas. This is a beautiful photo, but I suspect it's copyrighted.) There are three research stations in Antarctica, McMurdo, Amundsen/Scott, and Palmer. For some reason, this map only shows two, not Scott.
(Map from Christmas in Antarctica) 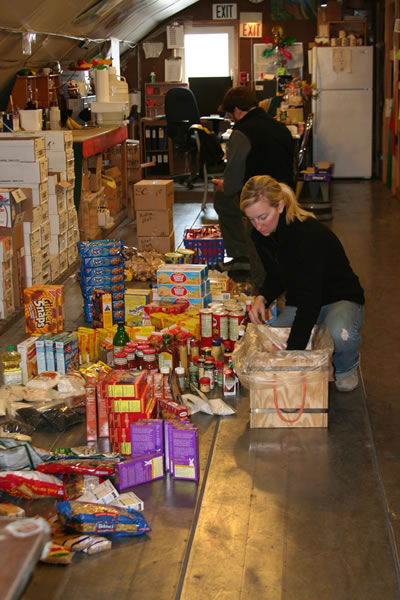 This is the food room at McMurdo.  This is where the food is stored for everyone on base.  These researchers are organizing food that they'll take with them when they go out on a field expedition.
(Photo from Professor Eric Hiatt's page about McMurdo Station) 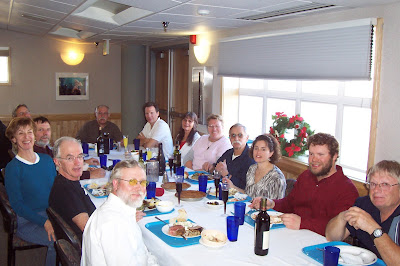 These folks all work together at McMurdo, and they're having their Christmas feast.  On the menu: prime rib, roast duck, crab legs, shrimp, and lots of desserts.
(Photo from Hot Stuff in Antarctica) 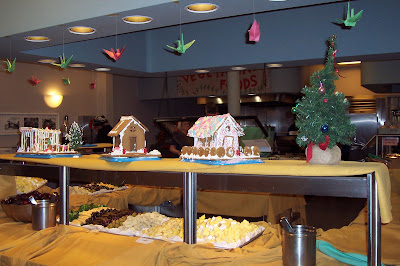 Here are some of the decorations in McMurdo, 2008.  That stuff beneath the gingerbread houses is a huge tray of lots of different kinds of cheese.
(Photo from Hot Stuff in Antarctica)

Racers, heading off on the course around the world. It's a bit of a wacky event, and some people dress in costumes, or they wear flags as capes.
(Photo from PolarTrec)

Carpenters, participating in the race.
(Photo from PolarTrec)

Merry Christmas from the South Pole!
(Elke Bergholz, just after completing the Race Around the World. Photo from PolarTrec.)

I decided to find out how different countries celebrate Christmas.  I'm especially interested in how people decorate their trees, but it's hard to find photos of Christmas trees that regular people have in their houses, especially since I don't speak their language.  So I thought I'd find a few details here and there about about different countries' traditions.

I picked Romania to start with because that was, for some reason, the first country that came into my head.


Here's what some Romanian Christmas tree ornaments look like: 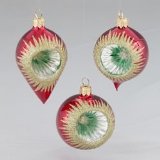 These are mouth-blown and hand-painted ornaments made in Romania.  They're not vintage but "vintage style." Unfortunately, you have to buy them in a box of 96, and at just under $7, a box will set you back $317.
(Photo from Amazon.com) 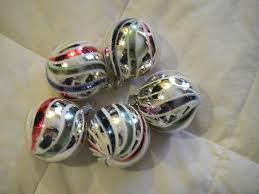 These are actual, vintage Romanian ornaments, made of glass
(Photo was available at Vintage Christmas Decorations)

Porcelain "lace" ornaments like this one also seem to be popular in Romania. This one will set you back $55.
(Photo from Carousel of Gifts)


I have a feeling those ornaments might be too fancy for most of Romanians.  Here's one person's Christmas tree in Romania:

(Photo from Christmas tree in)

I watched a ton of football over the long Thanksgiving weekend. I think I watched 6 games in 3 days. Which leads me to wonder, just how many football games are there in a season? I'm not going to count pre-season or exhibition games.


How much of this could you watch? In one sitting? 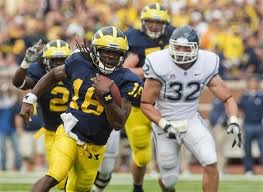 If you had this many televisions and they all showed football games, you could watch the entire season's worth of games in maybe 2 or 3 months.
(Photo from Audio Advice)

Don't forget the San Diego County Credit Union Poinsettia Bowl. I'm sure the players love to say they played in that one.
(Logo from NCAA Football)

Nothing says football like a chicken sandwich.
(Logo from SportsSystems) 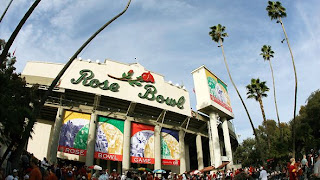 I've been to this game, in person and everything. The year I went, my team won. That probably won't happen again, though, for quite a few years yet.
(Photo from VernonCroy)

I went with a friend of mine to see the premiere of the new Harry Potter movie the other night.  My friend -- I'll call her Brigitta -- decided she wanted to make some Butterbeer for the occasion.  She looked up recipes online and discovered scads of them.

Some are non-alcoholic, some are made with alcohol.  Very few are made with actual beer.  Brigitta decided she wanted to find a recipe that was most like what probably would have been sold at the Three Broomsticks, and according to what she read, this meant that it probably involved cider. It should also taste butterscotchy, should be able to get foamy, and could be served warm or cold.

So my friend Brigitta embarked on an adventure of trial and error, testing out a few recipes and making her own adjustments, until she came up with something she liked.  This was what we had the night of the premiere.

Harry, Ron, and Hermione, running to get some of Brigitta's Butterbeer
(HP7 movie poster from the Arizona Reporter)


I don't have Brigitta's exact recipe, mind.  She didn't have any particular measurements written down; she was going more by proportions.  I didn't write down any measurements either because I was observing and documenting the historic event. 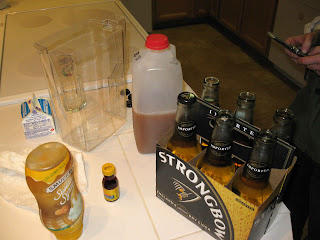 The ingredients:
First she poured some of the regular cider into the pitcher (yes, that's a Brita pitcher). I'm going to guess it was about a cup's worth of regular cider. 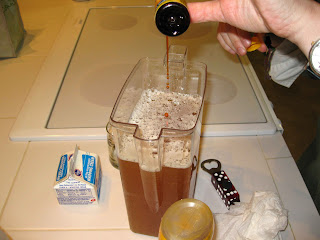 In the pitcher are the two kinds of cider, and here she's adding the extract.  Notice, no measuring spoons or anything.  If I had to guess, I'd say this was maybe a little less than a teaspoon's worth. 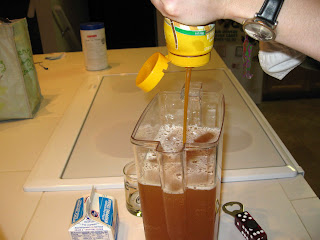 Next she added the butterscotch topping.  She squeezed about as much as you'd put on a large sundae, but then later added quite a lot more.  I'm going to say it was maybe half a cup's worth?  Or more. 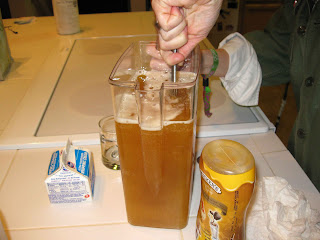 Then she whisked it up.  When she did this, I said, "Ooh, whisking."  She said, "Yes, the whisking is very important." 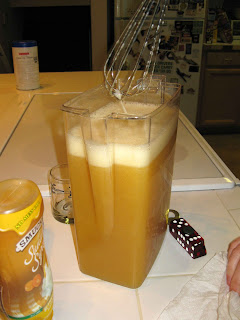 That's because the whisking is what makes it foamy, as you can see here.  This is also when it started taking on the butterscotch color. 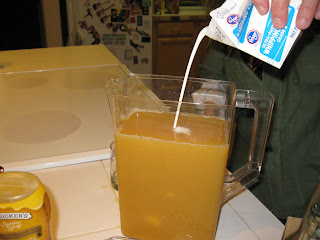 Then she added a dollop of cream.  She said it looks like it curdles at the surface a bit, but once you whisk it up, it all mixes in just fine.

After adding the cream we tasted it, and that was when she decided to add more butterscotch syrup.  When I tasted it, I looked at her in surprise.  "It tastes just like butterscotch candy!" I said. 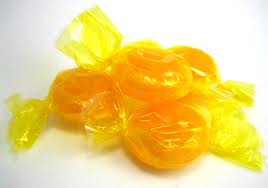 You know, these things.
(Photo from Nuts Online)


All in all, Brigitta's recipe made a little over 2 liters.  You could make all of this in a pot on the stove over low heat to make a warm version if you wanted to.  We opted for the cold version.

Her husband and I all had some before the movie, and it was downright tasty.

This is by no means the number one official Butterbeer recipe (there isn't one of those).  Lots of people have lots of different ideas about how to make it.  If you want to try some other versions of Butterbeer, here are some other places to look:


If you try out Brigitta's recipe, or any of the others, let us know what you think.

Image by Arabella Figg at The Hogshead
Posted by the apple lady at 1:12 AM 2 comments: