So, you know that bit of tom-foolery (pun) where the President "pardons" a turkey so it won't get killed and eaten for his Thanksgiving dinner?  Everybody says that's such a tradition, and isn't it clever and also humane, and there's all this ceremony around it.

Barack Obama pardoning the turkey -- or is he blessing it?
(Photo from change.org)


Well, as traditions go it isn't that old, and in my opinion, it's kind of dumb.  Here are the facts:

Nobody talks much about LBJ's turkey.  I have the feeling that's because it went quietly onto his table.
(Photo from Corbis at Bon Appetit) 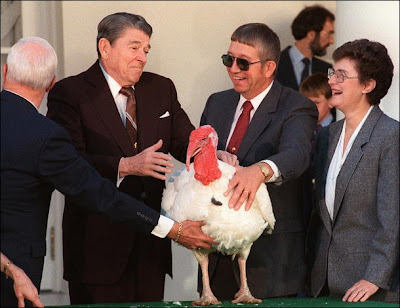 Ronald Reagan and his helpful press conference prop, the turkey.
(Photo from All This Is That)

GHWB and his officially pardoned turkey.
(Photo from Getty at Bon Appetit)


P.S. There is no period after the S in Harry S Truman.  He did not have a middle name, only a middle initial.  Since the S does not stand for anything, using a period is pointless. (pun)

I've had a request!  Daily Apple reader Jeroboam wants to know, when you switch your rear view mirror to the night-time view so the reflection from headlights doesn't beam straight into your eyes, how does that work?


I've always suspected mirrors are involved, but I didn't know exactly how, so I thought this was an excellent question.

Most cars' rear view mirrors have a button or a lever at the bottom that allows you to adjust the mirror to reduce the glare from headlights at night.  Pushing that button or tripping the lever does help -- but what exactly is happening with the mirror?  Why does this work?
(Image from Mobile Magazine) 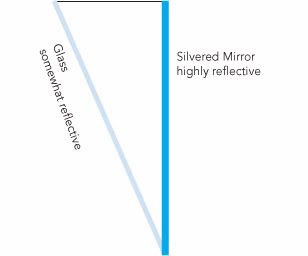 In these diagrams, you are sitting to the left of the glass, and the right edge of the silvered mirror is the back of the rear view mirror.
(Diagram by the Apple Lady) 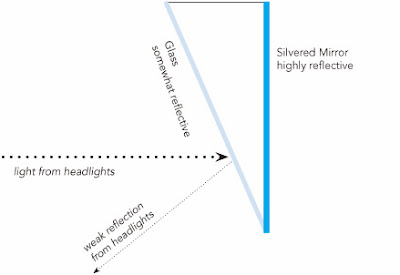 Also in the daytime, the angle of the glass relative to your eyes is such that the reflection bounces off in a direction not aimed at you.  So that's another reason why you don't perceive the reflection of the headlights off the glass.
(Diagram by the Apple Lady) 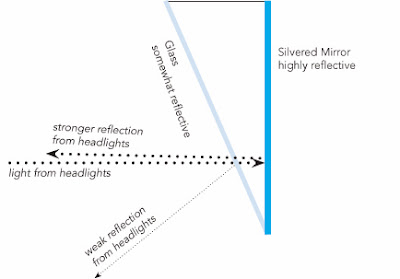 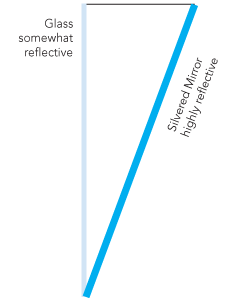 The day/night rear-view mirror in its night-time orientation.
(Diagram by the Apple Lady) 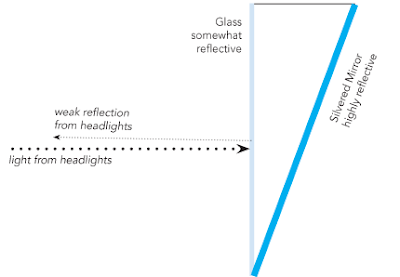 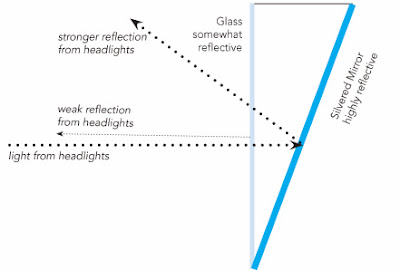 Though the reflection off the silvered surface is stronger than that off the glass, it is angled away from your eyes, so that's not the reflection that you see.
(Diagram by the Apple Lady)

Thanks for asking the question, Jeroboam!

Here's the video of the physics lecture, if you want to see the professor draw and explain the diagrams for you.  The informative stuff starts at about 1 minute 15 seconds in.

You might also be interested in: How Do I Get My Windshield Wipers to Stop Making that Annoying Noise?

Other Sources
Howstuffworks, How does a car's glare-resistant mirror work when it's in the glare-resistant setting?
The Straight Dope, How do "night" rear view mirrors work?
Today I Found Out, How a Car's Rear-View Mirror Works
Posted by the apple lady at 6:21 PM 1 comment: Links to this post

It's a blustery day, and that's got me thinking about hot chocolate.

Or is it hot cocoa?

What's the difference, if there is one?

Can you guess which of these is hot chocolate and which is hot cocoa?  By the end of this entry, I bet you'll be able to.
(Photo from fine cooking) Now that's a gooey cup of hot chocolate. The recipe for this Cioccolato Caldo calls for 6 ounces of dark chocolate.
(Photo from What's Cooking America. Scroll almost to the bottom of the link for the recipe)

This cup of hot cocoa has whipped cream, sprinkles, and a peppermint stick on top. But the important part is that it's made with a combination of half & half and whole milk.  That'll get you some creamy hot cocoa.
(Photo and recipe from Real MOM Kitchen)


FoodHappy's Hot Chocolate by the mug

FoodHappy's Hot Cocoa by the mug

This mug of spiced hot goodness is made using both cocoa powder and semi-sweet chocolate, plus cinnamon and nutmeg and cayenne pepper and espresso.  Yowza.
(Photo and recipe from OMFG So Good)

Of course you can add all sorts of things to your hot cocoa or hot chocolate for further deliciousness:
I wonder if sliced bananas would be good. Oooh, maybe sliced bananas coated in chocolate.... 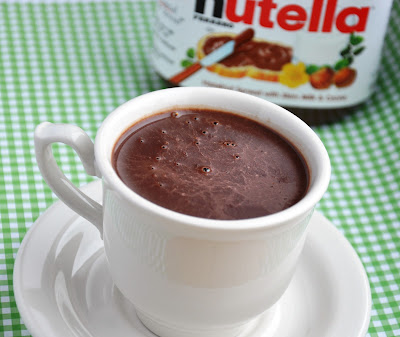 For Halloween this year, I dressed up as Raggedy Andy.

Raggedy Ann and Andy were dolls that came to life in books from the 1920s. They had nice little adventures like getting in pillow fights and roasting marshmallows and having the marshmallows get stuck to their soft cotton hands.
(Image from raggedyannandraggedyandy.com) 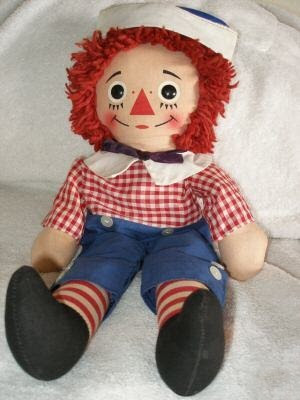 You could also get soft, stuffed dolls made to look like the drawings in the books. This is a Raggedy Andy doll.
(Photo from I Found My Childhood on eBay)


My costume was one my mom had and gave to me several years ago. I had worn it once about 10 years ago, and I thought this year, why not break it out again. Nobody I know now has ever seen me wear it, so it will be new to them.

Admittedly, my costume is only an approximation of the original doll. Also, while I remembered there were triangles on the face, I remembered them wrong so when I painted my face, it didn't quite look like Raggedy Andy's. The result was, people assumed I was a regular old clown.

And several people said they were therefore afraid of me--or my costume. 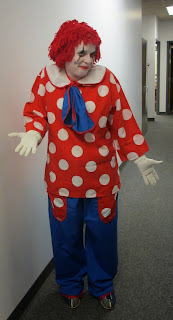 Really? THIS is scary?

First of all, I personally don't get the whole fear of clowns thing. It's a person wearing make-up and baggy clothes. Wooo, scary. So I'm wondering, especially since more people seem to be afraid of clowns--or more people are saying they're afraid of clowns--is this like bacon? I mean, is fear of clowns increasing the same way love of bacon has become so widespread, if you say "bacon," 15 people will start drooling immediately? Is fear of clowns becoming that pervasive, so now if you were to say, "Hey, a clown," 15 people would duck under a table and another 5 would say, "Totally. Love the bacon. Hate the clowns."

To me, if anything, this is only mildly annoying. But for some people, this instills fear.
(Photo from the Ronald McDonald House Charities of the Four States)

"We found that clowns [were] universally disliked by children," said one researcher who studied whether using clown images to decorate a children's hospital ward would be a good idea. 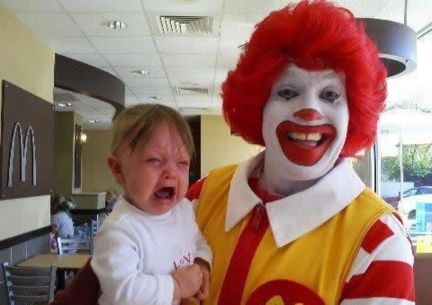 Children actually don't like clowns -- something to consider the next time you're planning a child's birthday party.
(Photo from Rap Genius)

I wondered if people were afraid of rodeo clowns too. I thought maybe not, since they help the rodeo contestants. But this guy, Keith Isley, who is a rodeo clown -- they prefer now to be called bullfighters -- said one of the parts of his job is helping people get comfortable with his clown-ness. One of the ways he does that is to let them see him put on his make-up, and even let them put some of it on him themselves.
(Photo by Michael Cavazos at the Longview News-Journal) L to R: Buffalo Bob, Howdy Doody, and Clarabell the Clown
(Photo from The Fifties Web)

We had a Bozo the Clown show at our local TV station.  One of the meteorologists played him.  I got to be on his show with the rest of my Bluebird troop.  He had a game where a lucky kid from the audience had to throw a ball into one of several circles, with the best prizes in the farthest circle. My friend Jill got to be the lucky kid, and she won a huge container of Tootsie Rolls that lasted her 2 years.  I don't remember anyone ever saying they were afraid of Bozo.
(Photo from Infinity Dish TV Blog)

Their weapons are popcorn that turn into spider-like insects, and cotton candy that gets spun into a suffocating cocoon of sugar-death. There's also something about the whipped cream pies that I can't remember.
(Photo from Pop-Break) Posted by the apple lady at 2:41 AM 2 comments: Links to this post