At long last, we come to the end of our series on What's Your Favorite Place. What does RoboCop have to do with geography, you ask? One avid reader (Anonymous) asked if I would write an entry about Detroit. I directed Anonymous to my already-existing entry on Detroit (paired with a companion entry about dachshunds, of course). Anonymous responded with:

I think the reason I forgot about the Detroit one was because you did not mention Robocop.

So I agreed that I would write an entry all about RoboCop and thus atone for my earlier omission.

Anonymous, I give you RoboCop

Here's what reviewer-types have to say about it:


Now, in true Daily Apple style, here are some various facts about the movie: 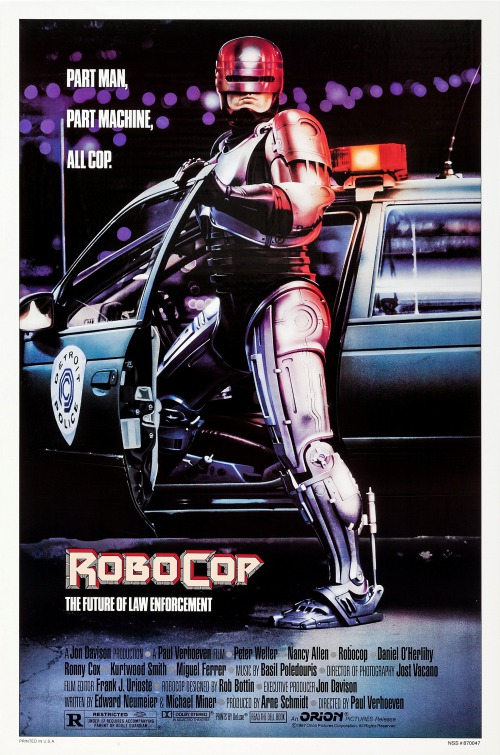 He's pausing on his way into the car because he can't get into it without taking the legs off his suit.
(Movie Poster image from IMP Awards)

The malfunctioning ED209
(Photo from an End of Media essay RoboCop, Now and Forever)

The Bell UH-1H Huey, the most-used helicopter in the Vietnam War, was the basis for the design of the ED209.
(Photo from Wings of Eagles Discovery Center)


This marks the end of our look into various geographic locations. Thanks, everybody, for your requests.

So I just got back from seeing Grindhouse. I don't usually post my reactions to a movie, and it's not that it was such a stellar film that I think everyone should go see it. But I went into it with a bad opinion, and it turned out that bad opinion was not justified. I have the feeling the movie has gotten a similarly bad opinion in general, and I want to try to counter that, even slightly. I had fun watching it -- for the zombie slasher movie that it is.

Grindhouse: refers to movie theaters whose main focus was "grinding out" or showing as many B movies as possible. Can also refer to the B movies themselves, which were often violent, racy, or exploitative. Sometimes the movies were passed from theater to theater, and over time they would become scratched or worn or some reels (usually the steamiest ones) would go "missing."

(IMDB Movie Terminology Glossary
FirstShowing.net Are you going to the Grindhouse?)

If you have any sort of fondness for the slasher movies of your youth, I think you'd enjoy this double bill. Also, if you remember and faintly miss the Mr. Microphone commercials, or the bizarr-o things they used to put on the movie screen when you were waiting for the feature to start, this movie will speak to you.

Here is what Grindhouse boils down to:
What more could you want?

One more thing to note: the Tarantino part of the double bill is really slow at first. Lots of talking, typical Tarantino fashion. Here's where you get up to get the beer (don't get up during the trailers, they're too funny and choice to miss) and the popcorn, go to the bathroom, have a smoke, etc. But make sure you're back by the time the second carload of chicks is on the road. And if you've missed the first part of his movie, know that Kurt Russell is The Bad Guy. Then sit back and wait for the ride. The payoff is worth the wait. Trust me.

And yes, the chick with the automatic rifle for a leg is worth it, too.

Except, in the movie, it's her other leg that's the gun
(Movie poster from worstpreviews.com)
Posted by the apple lady at 11:56 PM 1 comment:

I have one more request to address in the What's Your Favorite Place series (unless anybody else wants to ring in). That last request is actually about Robocop -- which is apparently somehow related to Detroit -- but since it's not really about a place, I think I want to insert my own request in first.

Some friends of mine are going to Venice in couple of months, and they told me that they're probably going to take a gondola ride. We were talking about the gondolas, and and how they work and all that, and we realized we were guessing about much of it. So I want to know the facts. How does one hail a gondola? How much does it cost? Do the gondoliers have to be licensed? How is a gondola different from a water taxi? As you can see, I have many questions.

Despite the colorful covers, all Venetian gondole are black.
This is thanks to a decree passed by the Doge in 1562,
which said that only gondole that transport important personages
may be colored. (Photo from Life in Italy)

Sorry this map looks a little funny, but it was the best one I could find
that shows the Grand Canal and the smaller and outer canals as well.
You can see this map in its original, much larger version,
which also allows you to click to view more detail at Venice Online.
The practical ferries, or the gondole de parada, or traghetti

The tourist gondolas, or charterage gondole

This canal in the San Marco district has a bit of a fondamente
on the left, and no shore on the right. Based on the pictures
I saw, most of the canals do not have a shore.
(Photo by Marpessa, 2005)
Additional facts about the gondole

With a slightly wider hull on the left,
the gondola lists to the right.
(Diagram from the Official Gondola Site)

Gondola with felze, or cabin.
Who knows what went on inside those felzes?
(Image from the Official Gondola Site)
Alexandra Hai in 2004.
She did much better on her tests in 2007.
(Photo from DW-World.de)
Sources
Official Gondola Site (English version)
VeniceWord, gondola
Teresa Cutler, "Gondolas: Venice in Black," Life in Italy
Kate Connolly, "Woman causes storm on Venice's Grand Canal," The Guardian, April 5, 2007
Judy Johnson, The Gondoliers of Venice: Co-operative Tradition Under Threat on the Grand Canal, ACCORD CASC Presentation, May 2005
"Rowing your boat - tips on becoming a Venetian gondolier," Insight on the News, September 6, 1999
Posted by the apple lady at 8:45 PM 1 comment:

By special request, I am interrupting the What's Your Favorite Place series to give you a brief biography of the recently departed Kurt Vonnegut. There have been tons of articles published about him since his death last week, and I don't want to re-hash what everyone has already said (modern-day Mark Twain, favorite on college campuses, etc. etc.). Instead, since I know only very sketchy details myself, I'm going to give you a biography. I’ve been a coward about heroin and cocaine and LSD and so on, afraid they might put me over the edge. . . . But I’ll tell you one thing: I once had a high that not even crack cocaine could match. That was when I got my first driver’s license! Look out, world, here comes Kurt Vonnegut.

Dresden, after the firebombing
(Photo from Tom G. Palmer's site)

This photo of Dresden, from Erich Ufschmid's site, is captioned Cremation on Altmarket, 1945

Q: What targets would you consider fair game for a satirist today?
KV: Assholes.

One of the few good things about modern times: If you die horribly on television, you will not have died in vain. You will have entertained us.

Listen. All great literature is about what a bummer it is to be a human being.

Like my distinct betters Einstein and Twain, I now am tempted to give up on people too. And, as some of you may know, this is not the first time I have surrendered to a pitiless war machine. My last words? “Life is no way to treat an animal, not even a mouse.”

I put my big question about life to my biological son Mark. Mark is a pediatrician, and author of a memoir, The Eden Express. It is about his crackup, straightjacket and padded cell stuff, from which he recovered sufficiently to graduate from Harvard Medical School.

Dr. Vonnegut said this to his doddering old dad: “Father, we are here to help each other get through this thing, whatever it is.” So I pass that on to you. Write it down, and put it in your computer, so you can forget it.

Next up in our What's Your Favorite Place series is the Merchandise Mart in Chicago. A reader named Cesar's Ghost also listed some of his favorite places in Chicago, but he seemed to be offering his own information about those places, rather than to be asking me to find out more for him. Cesar's Ghost, if you did want me to investigate any one of your favorite spots, let me know and I'll put together an Apple for you. In the meantime, we press on!

Here is the request I'll be responding to in this entry:

You so deftly handled my request for Chicago River schooling prior to a (truly) death-defying swim that I thought I might make another Second City suggestion: The Merchandise Mart! It's right here in the heart of downtown, has been here for many years, and is only 1 of 2 places in the city that warrants its very own L stop. It has a lot of history and remains to this day a hub for interior design of all sorts (amongst other things). I work in the building and have always been fascinated with everything from the architectural details to the pez heads in front to the mysterious pictures of fancy 40s era parties held on the roof. Please shed some of your light upon this magnificent (and monstrous) building in downtown Chicago!

The Merchandise Mart in Chicago
(Photo by Felix)

The most obvious thing about the Merchandise Mart is that it's big. But how big is it? A portion of the Mart, at the top of the central column.
(Photo posted by UptownChiBoy)

This cantilevered umbrella (model #P-18) stands on a teak wooden pole and is available from FIM Umbrella (Suite 8-1000). Or you can design your own patio umbrella to be custom-made.

Think you might want your office to look like this? That cabinet alone,
on which the flat-screen TV sits, will set you back a mere $4,300.
Part of the Mural office line from Nucraft (Suite 1166)

Who Owns It Now?

Chris, I'm sorry but I couldn't find anything online about parties on the roof of the Merchandise Mart back in some mysterious point in time. Looks like that's something you might have to look up in a book -- or I bet they'd tell you the answer during a tour of the building.

Next up in our What's Your Favorite Place series, we move from New York City and the East Coast to the West Coast, specifically, Los Angeles, home of Musso & Frank Grill. (Anybody from Chicago want to put in a request and fill in the big-city middle?) The front of the restaurant today
(Photo from Seeing Stars)

Judging by some of the narrower booths, I'm guessing this is the West room.
(Photo from Time Out of Mind)

The counter, getting ready to open for the day
(Photo from Time Out of Mind)