I was driving home one night and moisture kept forming on my windshield so that I had to use my wipers. I wondered if this was technically fog or dew. And what's the difference between the two, anyway?
That's the simplest way to think of it. But of course there's more to it than that.

Dew
(photo from University of Aberdeen School of Physics) Fog
(photo from the University of Houston's Fog in the Woods)


The moisture on my windshield certainly wasn't ice fog or freezing fog. It wasn't so late at night that you could say it might as well have been morning, which would lead me to say it couldn't be dew. However, there were no cloudy patches in the air around me that I was driving through (I do like to drive through fog. I like to make a verbal "foom" sound effect when the car first punches into it.)

The temperature probably had been quite a bit warmer earlier in the day and had cooled fairly significantly by the time I got in my car to drive home. So I'm going to say that the moisture on my windshield that I kept having to wipe away was dew.

And that's probably why using the defroster also helped, because it raised the air temperature so that the water on the window could evaporate away from my window into the air.

This also means that that old song "The Foggy Foggy Dew" is more than just inexplicable, it's enormously confusing.

A few days ago, I was listening to Dark Side of the Moon, specifically my favorite song from that album, "Time." It occurred to me to wonder how they came up with the name "Pink Floyd" anyway.

It's actually quite emotional standing up here with these three guys after all these years. Standing to be counted with the rest of you. Anyway, we're doing this for everyone who's not here, but particularly, of course, for Syd.

For an update since this posting, see a brief entry on Syd Barrett.


Sources
Wikipedia, Pink Floyd
Dolly Rocker's Syd Barrett FAQs
For a great article on Syd Barrett, read "You Shone Like the Sun," The Observer-Guardian, October 6, 2002
Posted by the apple lady at 11:55 PM No comments: Links to this post

A couple days ago, I was listening to a cooking show on the radio, and the chef was asked how to make Boston Baked Beans. He said that you can make them either with rum or with molasses, both of which were very much available in Boston once upon a time. He said that the molasses in Boston was part of the reason for the Great Molasses Flood, when a barrel of molasses exploded and oozed through the streets and actually killed a lot of people. I had to know more.

Molasses
(Photo from The Natural Path) 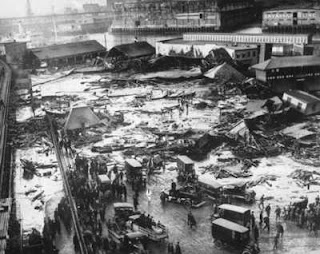 A while back now, 3d asked:

I don't know if this an unappropriate subject or not, but my wife would like to know why a woman's cycle will change when with different groups of women. Perhaps there's really no explanation for this.

Some brief investigation into this question pulled up some interesting research. Or anyway, I found it pretty fascinating. I always wondered about this. I had heard that maybe the moon had something to do with it, but people's menstrual cycles didn't necessarily seem to match with the full moon, so I didn't think that was it. Turns out, it's scent that does it.
Hope that helps, Wife of 3d!

I think that, since nobody has added any new requests in a while, we'll call the requests finished for now. Thanks to everybody who posted a question! You've helped make this blog even more interesting and informative for lots of other people.

A while back, Fork Stealer wanted to know, does one "welsh" or "welch" on a bet when one does not pay what is owed? And if one spelling is preferred, why that particular spelling?

First of all, I'm going to note that this expression is an ethnically pejorative phrase. It has its roots in England, whose citizens considered the Welsh to be a substandard people for reasons that are unclear to me. I don't care to unearth those so-called "reasons." Let's just say the English didn't like their next-door-neighbors the Welsh and leave it at that.

The primary reason I'm answering this question is in the hope that once people know what it refers to, they will stop using the expression.

To address Fork Stealer's question as accurately as possible, I consulted my Oxford English Dictionary. I found no entry for "welch." Under the entry for the verb, "to welsh," it offers "welch" as a variant, whose origin is unknown.

According to this same dictionary, a Welsher is "A bookmaker at a race-meeting, who takes money for a bet, and absconds or refuses to pay if he loses." Further down, an additional definition of Welsher is simply "a Welshman." In other words, once upon a time, people pretty much equated any man from Wales and cheaters. I don't know if the English vs. Welsh antipathy continues today, but I say, let's stop the name-calling, please?

Like Fork Stealer, I thought the phrase was to "welch" on a deal. I know that I thought this because somewhere in my childhood brain, I connected Welch's grape juice with the concept of not paying one's bets. If you did not pay up, this meant that not only were you a cheat, you also had the same kind of puckery mouth that you would have if you drank Welch's grape juice. While I now know that this is not the case, I think I prefer these connotations to the original.

I love the OED. I don't mean the Concise one, I mean the big honking 24-volume set (also available in micrographically reproduced form, in two thick but far more usable volumes). An online version is available, but as far as I'm concerned there's no substitute for the printed, bound, browse-through-it version. If you ever have the chance to buy a copy, do it.
Posted by the apple lady at 6:34 PM 14 comments: Links to this post

Whew, the insanity week is over. So now, on with Mr. T.

Poster from Rocky III, when Mr. T first said, "I pity the fool."
(order the poster from PopartUK)

This signed picture of Mr. T duking it out with Rowdy Roddy Piper can be yours for $119

All that gold probably would fetch a hefty sum.
(Image from Da Bronx Bombers)

Photo from movies.yahoo.com
Sources
Internet Movie Database, entry and biography of Mr. T
Wikipedia, entry on Mr. T
Mr. T vs Everything -- see him battle AC/DC, the Australian Parliament, the Brady Bunch, Carrot Top, the Iron Chef, and more!
Posted by the apple lady at 1:05 PM No comments: Links to this post

This is Not an Apple

Sorry about falling behind in the postings lately. I've been working overtime every day this week, and it's been pretty exhausting. Then yesterday, there was some kind of problem with Blogger and it wouldn't let me access the site. No worries, I'll very soon have an entry about the next item up for blogs, Mr. T.
Posted by the apple lady at 9:17 PM No comments: Links to this post