Apple #363: The Purpose of Mosquitoes

Last week, a friend told me about a story he'd heard on NPR, about how mosquitoes alter the pitch of the whine they make in order to harmonize with and woo a potential mate. This is a very cool bit of information, but the fact that it was about mosquitoes raised that old question for us, what good are mosquitoes anyway?


We all know a lot of the bad things they do:

By the way, only female mosquitoes bite. Male mosquitoes don't have the proboscis for it. They also don't need the blood. The females need blood only a few days out of their lifecycle, just before they're going to lay their eggs.


But what are the good things they do?

Mosquitoes and especially their larvae are food for fish, birds, frogs, bats, etc. But mosquitoes make up only about 1% of the diet of other animals and insects. Some scientists will even say that if you removed mosquitoes from the planet, those animals wouldn't starve because they eat lots of other stuff besides mosquitoes.

But, the scientists caution, you don't really want to get rid of all mosquitoes from the planet because they might play a bigger role than we realize. So, okay, I ask, what role could that be?

In addition to themselves being a food source, they pollinate. Nectar is their food (not blood), so when they stick their long skinny noses into the plants to get after the nectar, they also happen to collect and distribute pollen.

The don't pollinate a lot of plants, but some, including:

The Platanthera flava, or the pale-green orchid, and one of the plants pollinated by mosquitoes as well as other insects. This species is threatened or endangered in its home locales.
(Photo from Robert W. Freckmann Herbarium at U of Wisconsin)


In all of those above cases, mosquitoes are not the only pollinators to visit those plants. For example, some species of orchids are pollinated by mosquitoes and also butterflies. Both have really long noses that they can stick way down into the orchid to get at the nectar, and in the process, get pollen all over themselves. So you could also make the argument that, even when it comes to pollination, if you got rid of all the mosquitoes in the world, the impact wouldn't be that great.

However, there is one plant that is pollinated only by mosquitoes. It is the blunt-leaved bog orchid, (Habenaria or Platanthera obtusata). It grows in bogs and other swampy or wet woody places. Most people seem to talk about it growing in northern Wisconsin, but its habitat is in wetlands all over the Northeast, Midwest, and lower Canada. Varieties also grow in Alaska and Eurasia. 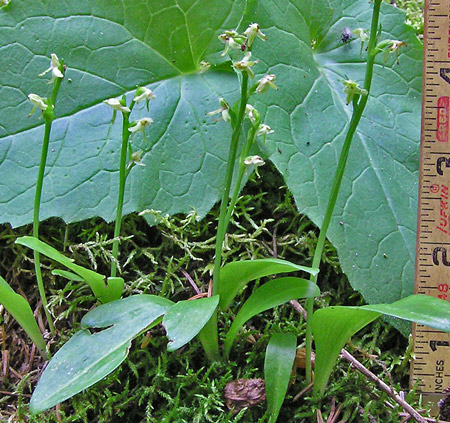 Platanthera obtusata, or bog-leaved orchid, here blooming in Colorado. This plant, too, is threatened and likely to become endangered in the foreseeable future.
(Photo from SW Colorado Wildflowers)


So the question then becomes, what role does this plant play in the greater scheme of things? I haven't found anybody who has the answer to that, or at least they're not giving it out for free on this here Internet. But as you've probably learned elsewhere by now, wetlands play very important roles in cleaning fresh water and balancing other ecosystems like forests and and aquifers. All the plants in a wetland -- and the species diversity in a wetland environment is quite vast -- play important parts in keeping the wetland healthy and functioning. 
So even though I can't tell you exactly what the Platanthera obtusata's role is in the world of wetlands, I'm going to bet that it does support other organisms in some crucial way. So if we want to preserve this and other bog orchids, it looks like we're going to have to keep the mosquito.

That said, I'm not saying, "Let's all love the mosquitoes," and don't slap them if they're biting you. Because in addition to being annoying, they do spread horrific and nasty diseases that kill people. Maybe there's a way we can manage them better, without killing lots of other stuff in the process, or maybe there's a way we can get them to stop carrying around those diseases. I mean, talk about baggage.

So, hey, scientists, would you get on that, please? Thanks.


Here are some other tidbits I came across while researching mosquitoes:

That's right. Your beloved chocolate, brought to you courtesy of biting midges.