I decided to follow up my entry on absconded president of Ukraine Viktor Yanukovych's home on Mezhyhira, Ukraine with an entry about the Black Sea.  I will try to steer clear of politics or finger-pointing or unpleasantness like that and just give you some facts. Aerial photo of the Black Sea.  The lighter blue swirls near the coastline are blooms of phytoplankton.
(Photo by NASA, via Wikipedia)

The Black Sea and its surrounding countries.
(Map from Marine Insight)

Since the waters of the Black Sea don't get mixed around, the oxygen at the surface does not get pulled down to the waters below.  Which means the deeper waters do not contain oxygen.
(Diagram from Marine Insight)

The Thornback skate is one type of fish that uses electroreception -- low pulses of electricity -- to navigate and locate prey. It also has a row of spines on its back which are sharp, though not venomous.
(Photo from Seaquarium.co.uk)

Topside, the Thornback looks fierce. The underside looks like she wants to be friends!
(Photo from Seaquarium.co.uk) Lawn of the palace said to have belonged to Vladimir Putin until it was sold for $350M in 2011.  Perhaps this is where Viktor Yanukovych got his ideas for his house?
(Photo from Wikleaks, via Wikipedia) The master bedroom of "Putin's Palace."
(Photo from Wikileaks, via Wikipedia) 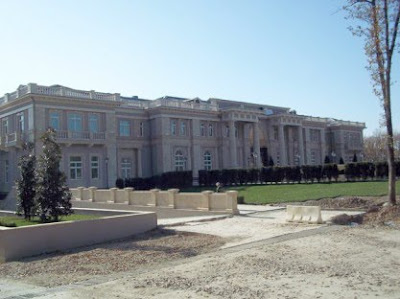 The exterior, when it was still under construction.
(Photo from Wikileaks, via the Real Estalker)

This building is in Sevastopol, on Artillery Bay.  Wikipedia says this building is called Nahimova, which is a monument built in commemoration of all the ships from Sevastopol that have sunk.  That doesn't speak highly of that location as a naval base, does it?
(Photo from Wikipedia) Tolstoy in 1854, during the Crimean War. Nice facial hair, Lev.
(Photo via Wikipedia)


Yep.  Those are just some facts about the Black Sea, what's in it, and what surrounds it.