I have had a request!  Daily Apple reader Jamal and his friend Monique wanted to know how trucking weigh stations work. That seemed like a pretty simple question, but when I conversed some more with Jamal, it turned out that he and Monique were wondering, what is to prevent some truck from driving a ton of explosives into some city and blowing it up, as happened in Nice.  They were wondering if those truck weigh stations, by virtue of how they work, would catch something like that.

The second part of this question turned out to be really hard to figure out.

In pursuit of the answer, I have read a ton of truck-driving websites, training manuals, and chat rooms.  I've learned a fair bit about truck driving, a whole lot about truckers' antipathy for the police, the complicated and sometimes adversarial relationship they have with the companies for whom they drive, and I've read more than a few trucker tales (they weren't as good as I was hoping for, or I'd have shared some).  I'll try to distill what I've learned into some usable bites for you to nibble on.  Hopefully by the end of this, we'll have arrived at or close to the answer Jamal and Monique were seeking.

Trucks lining up to get weighed at a weigh station.
(Photo from The Lantech Blog)


What Weigh Stations Are For

I thought I knew how these things work, just from having seen them in action as I drove past.  I was wrong.

I need to move the [trailer tires] back – but just a little bit. It takes me a couple of tries, and I find that I’m stuck between two positions. On one, the drives are over, on the other it’s the trailer. Adam and I discuss options. We’re SO close. Maybe a DOT officer won’t care about 100 pounds. But maybe he will. That’s a violation and a fine. Both our record and our company’s record gets a ding for it. I don’t want to take the chance. We joke that Adam could lay across the dash when we go through weight stations. We figure we can leave our fuel below 3/4 of a tank to help.

Certified CAT scale, typically available at larger truck stops.  Costs $10 to weigh your truck. Drive up, park, go tell the scale operator your trailer number, then get your weight ticket.
(Photo from Somanymiles)

Ticket from a CAT scale showing the 3 axle weights and gross truck weight.
(Photo from Somanymiles)


Types of Weigh Stations and What Happens There 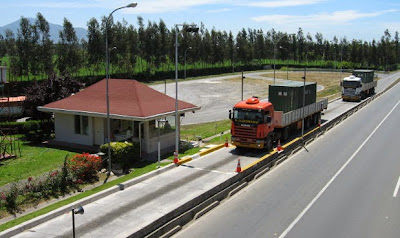 Weigh station in use
(Photo from Weighing Review)

EZ-Pass system used to tell truckers whether or not to pull over & get weighed.
(Photos from Baby & Honey Bear)

Sample IFTA license, showing where you're allowed to drive your truck because your company has paid fuel taxes in those locations.
(Image from Iowa DOT) 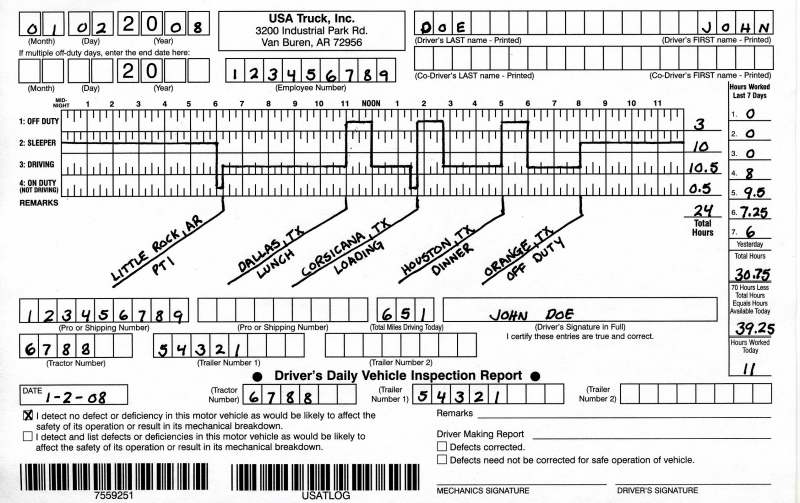 Sample log record showing what the truck driver did when while hauling this load.  You're not allowed to exceed 11 hours' driving time so you don't wind up too tired to drive safely.
(Image from Wikipedia)

Typical Coopsareopen map, showing the major highways in each state -- this happens to be Illinois -- with red dots indicating the presence of weigh stations.  You have to pay extra to find out if they're open or not.
(Map from Coopsareopen)


From the Officer's Point of View

State police cruiser having stopped a semi-truck on the highway.
(Photo from Police Mag)

Is the driver nervous? Is he sweating? Is he rubbing the back of his neck? Did he just urinate on himself when asked what his shipment was? (It happens.)  Several years ago a large cash seizure was made from a tractor-trailer on Thanksgiving Day. The big rig was being operated by someone who didn't have a commercial driver license (CDL), and was wearing Bermuda shorts, a Hawaiian shirt, flip flops, and multiple gold chains. Other than the big indicator of not having a CDL, the huge indicator was the fact that the driver did not look, dress, or act like a trucker. Just as you do when you're out stopping cars for drug interdiction, ask yourself, does the story match the person?

Understand that most truckers are hardworking souls just trying to make a living, but they do commit traffic infractions, and some are involved in criminal activity. (from Police Mag)

But Does It Work?

Oct 11, 2015, El Reno, OK -- An Arizona truck driver was pulled over for swerving and weaving while driving. He said he was exhausted from driving all the way to Georgia to help his girlfriend move. So the police suggested he pull over to take a nap.

"Then, out of nowhere, Vasconcelos told authorities he wasn't a criminal and they could check his truck if they wanted to."

Deputies figured they'd better take him up on that, so they searched his truck. They found a loaded pistol on the front seat, and a large metal box forced into the mechanism of the engine which contained $3 million worth of heroin. (KFOR News channel 4)

June 21, 2016,  New York City -- Police pulled over this vehicle as it was about to enter the Holland tunnel because it had a cracked windshield.

Once pulled over, the officer noticed a pistol on the front seat and asked the driver to exit the vehicle. He discovered that, in addition to the pistol in plain view, the driver had been literally sitting on a loaded .45. Further searching found a cache of weapons including an AR-15 assault rifle, a 12-gauge shotgun, 4 semiautomatic handguns, multiple ammunition clips totaling 2,000 rounds, including one labeled "Merica."

The driver and his friend traveling with him said they were on their way to a heroin hotel in NYC to rescue his daughter who was hooked on heroin, and any other addict who wanted to be rescued. (NY Post)

My Dad is a truck driver and he likes to tell a story about a Keebler cookie driver who was getting teased on the CB once: he said that the other drivers kept asking him questions, like "Do elves really make the cookies?" And "Are you an elf?" And "How tall are you, anyway?" Dad says this truck driver let the good natured ribbing go on for a while, and then he said, in a deep voice, "Listen, I only drive this truck for the paycheck. I don't ask any questions. I just back the truck up to the tree, and they fill it."