I was thinking about the word limbo. There's the kind of limbo you can be in, which to my way of thinking is an in-between state, neither here nor there. But there's also the dance, where you try to bend backwards and walk underneath a stick. I wondered, are the two words somehow connected, in their origins perhaps? Or are they totally different things that happen to share the same word?

Limbo the Place, or State

Mantegna's Descent Into Limbo
(Sold at Sotheby's for $28.5 million) Images of Mary Pickford as Priscilla, in the 1910 film "An Arcadian Maid." These images are provided as examples of films that have not been fully restored and remain unavailable to the public. The author of the Pickford Film Legacy website writes, "These Pickford titles remain in a seemingly unnecessary state of limbo." The woman herself seems to be stuck in limbo.
(Photo from the Pickford Film Legacy)

Dancers in Grenada, which is next door to Trinidad, doing the limbo
(Photo from the Grenada Drum Festival)

So, there are similarities. The dance originally depicted a certain type of limbo, that of being forced into slavery, a state from which one never knows when one might be released. In both the dance and the religious theological definition, people are trying to meet someone else's expectations but not quite making it. Clearly, limbo is not a good place to be.

It's a good thing they made a dance out of it. It's sort of like the blues, and how those songs take feeling so bad and turn it into something that makes you feel good. 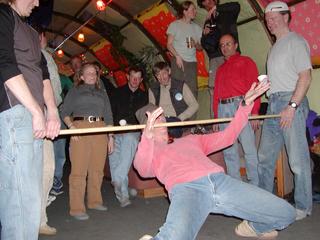 These people live at the South Pole, and they're doing the limbo
(they also may have been drinking alcohol mixed with fresh snow water)

It appears that the Pope is considering declaring that limbo was never an official part of the Catholic church's teachings, and that it may not actually exist. But as far as I can tell, he hasn't made an official determination one way or another yet.

So now even the concept of limbo is in limbo.