I generally avoid talking about brand-name stuff here because I don't want to go around advocating products and coaxing people to buy things and turn this site into some thinly-veiled commercial. I would hate that, as a reader, so I haven't wanted to do that to you. But I'm going to make an exception this time because I have been curious, ever since I tried it, how the Mr. Clean Magic Eraser works. Because it works really well.

The original Magic Eraser, out of the box, before being put through a trial -- and performing beautifully!
(This and other photos of how it performed at Michael P's blog of Cruft)


My kitchen sink is an old enamel thing and it stains really easily. Press a pan against it and voila, there are a bunch of steel-colored scrapes all over it. Leave a glass in the sink with water in it for a day and it leaves a ring. Even though these stains show up very easily, often even bleach doesn't get them out. With the Magic Eraser, though, they come off with hardly any effort. Miraculous.

Same story in the shower. Wipe it on the floor and the water stains come right off. It cleans gunk off the side of pans that regular soap & a dishcloth can't budge. It cleans out the bathroom sink easy as pie. It works so well and so easily, I was very curious to know how it does what it does so well. At the same time, I was afraid to find out that I was using something toxic or wrong or in some way bad. So I restrained my curiosity and did not look into it. Until today.

I am very relieved to know, the Magic Eraser is not bad.

I like the Extra Power variety. The curvy sides make it easier to hang onto. It's also supposed to work 50% better than the regular sort, but I haven't done a one-on-one comparison, so I can't attest to that. 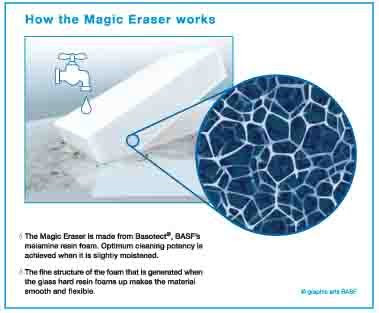 Diagram of the structure of the melamine foam in a Magic Eraser.
(Image from BASF. They also have an animation of how it works that's helpful.)


So then I have to ask, what is melamine? 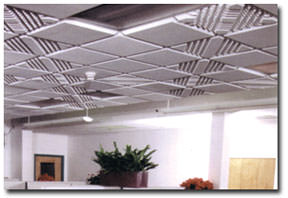 When your Magic Eraser starts looking grungy like the ones on the right, toss it.
(Photo posted at a billiards forum, by a member recommending its use in cleaning the shaft of pool cues.)