So there's going to be a blue moon in a few days.  Which means it will be the second full moon this month.

Why is it called a blue moon, anyway?

A full moon that, with photography's help, appears to be blue. But the blue moon we'll experience won't actually look blue.
(Photo from Geekologie)

This example month shows how the moon's phases mostly but don't exactly correspond with a calendar month.
(Image from menstruation.com.au)

"Seven times in 19 years there were — and still are — 13 full moons in a year. This gives 11 months with one full moon each and one with two. This second in a month, so I interpret it, was called Blue Moon." 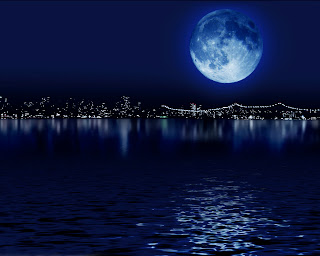 And this "blue moon" isn't exactly real.
(Photo from Within My Eyes)

This moon looks blue in the photo, but the moon probably didn't appear to be so when the photographer took the picture. Just as the phrase "blue moon" indicates a moon that doesn't actually look blue.
(Photo from Doing the 116 Blog)


But why is it Blue? 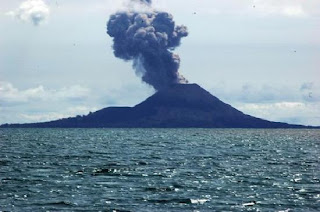 Krakatoa (or Krakatau as the Indonesians call it) erupting more recently.
(Photo from Fajaryusufrock)


In true correspondence with the term, I am preparing this Daily Apple as a true Daily Apple -- the second one in two days.  I also just discovered that I wrote an entry on Blue Moons once before.  I completely forgot about that.  Repeating a topic, my dear readers, is very rare.  That's like the moon after the eruption of an Indonesian volcano rare.