As the Olympics wind down to a close, I thought I'd show you the answers I found to a host of little questions that I had about various bits & pieces from different athletic events.  It's a medley of Olympic facts!

Diving: What's up with those little towels that the divers carry around all the time?

Christina Loukas drops her shammy down from the diving board during the women's 3M springboard prelims.
(Photo by David Eulitt of the Kansas City Star)

The Sammy towel sells for between $12 and $20 each.
(Photo from Swimx.com) 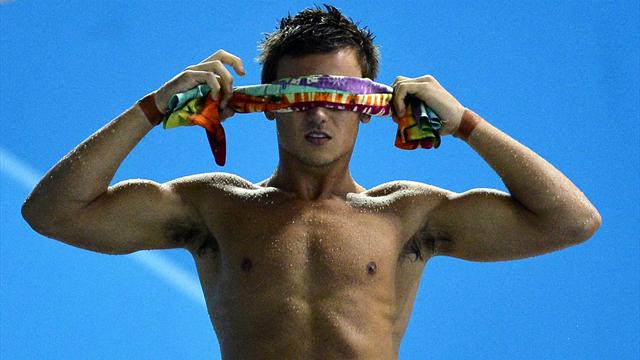 Great Britain's Tom Daley has a tie-dyed shammy.  Here, he's using it to cover his eyes between dives.
(Photo from UK Eurosport)

This leads to my next question, which is:

Diving: How come the divers go into those little pools after they dive?

Especially if they need their hands to be dry, why do they go in the water and get wet again before their next dive? Divers waiting in the hot tub in between dives. Notice they all have their shammies with them.
(Photo from Business Insider)

Swimming: How do the swimmers shave down?  Do they shave or do they wax?

I was on my school's swim team as early as the third grade.  I was never fast, and I have enough 5th and 6th place ribbons to prove it, so I wasn't on the high school team.  But we young ones swam the same practices with the older girls, so that's how I learned about shaving down.


Here's the deal with shaving for swimming.  Body hair increases drag and slows you down in the water.  Less body hair makes you faster. Research has been done that proves this, so shaving down has become a pretty standard practice in the sport since about the 1950s. What a lot of swimmers do -- this is true for both men and women -- is not shave for the majority of the season, until a key meet.  Then they'll shave pretty much everything that's not covered.

This is partly for the physical benefit of reducing drag by that 1%, but it also gives you the sensation of feeling slicker and quicker in the water.  Imagine shedding all that hair one day and then getting in the water -- whoo!  You feel slick as a seal.

The question I had as I watched the Olympic swimmers compete was, do they shave, which means having to shave several times over the course of the competition, or do they wax?

We're so well-shaven, it's kind of unbelievable!
(After Dana Vollmer, Rebecca Soni, Missy Franklin, and Allison Schmitt set a new world record in the 400M relay at London 2012)
(Photo from The Strata-Sphere)

That fan is practically shrieking, "Those lasers did a great job!"
(Kerri Walsh-Jennings after her 2nd gold medal win at the Beijing Olympics in 2008)
(Photo from Pregnant Hollywood)

At this team shave-down, a swimmer named Matt is getting waxed.


Track & Field: How come so many US runners are wearing those bright yellow shoes? 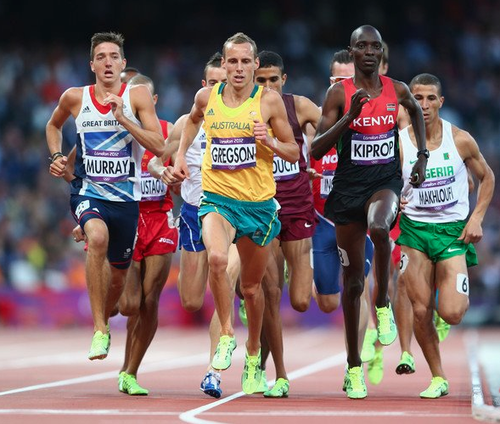 Looks like every runner but one in this group is wearing the neon yellow shoes.
(Photo from Natural Running Center)

The US women's gymnastics team compete barefoot. But at their medal ceremony, they were all wearing the Volt shoes. That's how pervasive these shoes are.
(Photo from Natural Running Center) 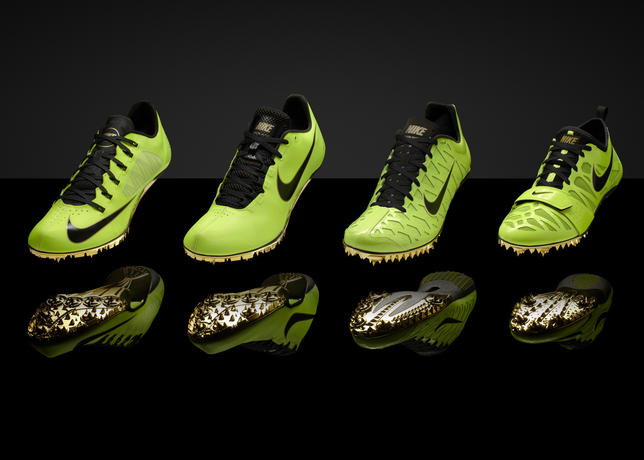 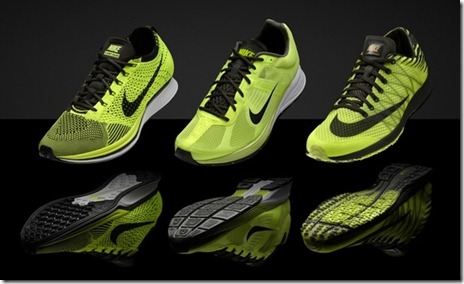 These Nike Volts are "flats" for the distance racers. And maybe preferred by the general public.
(Photo from Runblogger)

Oh, and one last thing. No, the gymnasts don't wear anything under their leotards. That goes for men and women.


Sources
Diving
Swimx, The Sammy Towel
NBC Olympics, 10 things you should know about diving
iSport, Why Divers Use a Shammy
Swimming
iSport, How to Shave Down for a Swim Meet
howstuffworks, Why do swimmers shave their bodies? Shaving Tips for Swimmers
Solo Swims, Shaving Down: The effects on swimming of removing body hair
Swimmer's Daily, Danish Darlings introduce Mie to their Wax On Wax Off ritual
Livestrong, What Do Swimmers Do to Remove Body Hair?
Daily Mail, "'Waxing makes me want to punch someone': Team USA beach volleyball stars on getting their bodies in shape for THAT skimpy kit", July 30, 2012
Well Being Tips, Split Seconds Count - Olympic Swimmers and Hair Removal
Track & Field
AdAge Global, Consumers Don't Really Know Who Sponsors the Olympics
Forbes, Ambush Marketing: An Olympic Competition. And Nike Goes for Gold, August 7, 2012
NBC News, The Bottom Line, Nike takes marketing gold with neon-yellow shoes, August 10, 2012
Metro News, Yellow volt shoes a hit at London Olympics, August 12, 2012
Nike, Inc. Nike Unveils Volt Collection for Track and Field
Posted by the apple lady at 11:17 PM