Valentine's Day approacheth.  I've already done an entry about the origins of Valentine's Day -- which, by the way, is far more bloody and insane than anything our capitalism-saturated culture could have come up with today.


Since I've already done that, I thought, what about the heart shape that we draw?  It bears pretty much zero resemblance to our actual anatomical heart in our body.  I know that we were drawing the heart shape long before we had an inkling what our anatomical heart looks like, so it's no surprise that the two have little relationship to each other.  So where did we get the idea for that shape? Well, so I've done some reading.

How we came to draw the shape of the heart the way we do, and how it came to be imbued with all sorts of metaphor and symbology -- my heart, my love, my sweet, my dear -- is one of those things that happened slowly, over time, and yet also in so many different ways, nobody can put a precise time stamp on what happened when, or first.

So we don't really know exactly how we came to draw that heart shape and call it what we do.  We just keep drawing it and equating it with love.  But, every once in a while, people like me get curious about where that symbol came from, and they try to figure it out.  They come across the multitude of theories but settle on one or two that they like the best.

It is my theory that the story you think is the most accurate about where the heart shape came from actually says a lot more about how you define the nature of love than it does about history or facts or anything like that.

So, of the theories I am about to present, which one will you decide is the most accurate? Here's Dionysus, god of wine and theatre and ecstasy, crowned with a wreath of ivy.  Note that the shape of the ivy leaf is similar to our heart-shaped symbol today.  Note also the pine cones to his left and right.  Pine cones will come up again later.
(Image from Greektheatre.gr) From the 1250-ish French manuscript, Roman de la Poire, here depicting a lover kneeling before the woman he loves, offering her his heart.
(Sourced from Wikipedia)

Adrea Pisano's Charity (Caritas), one of the bronze panels on the Baptisterium in Florence, c. 1337.
(Image from Wikipedia)

Imagine this turned upside down so the point is pointing up. OK, now think of various bits of naked anatomy.
(Heart shape from The Graphics Fairy)

This is a Renoir painting, done in 1918-1919, so much, much later than when the Medievalists were making their manuscripts. But this gives you several possible sources of the heart shape in one painting.  Could the heart be based on the shape of a woman's bottom, as shown at right?  Or is it perhaps the shape of her breast, like the one that comes to a very defined point at left?   Or could it be based on both breasts together, as shown at center?
(Renoir's Grandes Baigneuses from France This Way)

HEY! GOOGLE CENSOR MORONS! THIS IS FROM ONE OF THE FINEST WORKS OF SCULPTURE OF ALL TIME! MICHELANGELO'S DAVID! You idiots.  OK, readers, if you want to see the image -- no, wait, they put up the censor thing over the original source image too. Jackasses.

I don't want to leave out the male anatomy from this discussion.  Here is a zoomed-in shot of a reproduction of Michelangelo's David's specials. If you imagine the heart shape turned point up, you can see how the bulges at the bottom of the [I'm going to use a phrase that won't attract prudish people's attention] pair of round items might correspond with the bulges of the heart.
(Photo from Colors Magazine)


Now I'm going to post another photo that has nothing to do with anything. 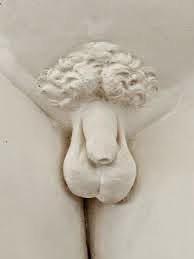 Here is a perfectly ordinary bit of sculpture.

Giotto's allegory of Caritas, from his fresco depicting the life of Christ, circa 1305. She is giving her heart to God above and demonstrating this by giving food to people below.
(Image from Wikipedia)

Here, again, is what an anatomical heart looks like.
(Image from Heart Research UK)

And here's your typical pine cone.
(Image from Wiktionary)

Title page from the Documenti d'amore, c. 1320, a collection of poems and other literature about love, taken from various authors including Dante etc., along with illustrations in miniature.
(Image from Google eBook version)

Depiction of the Five Wounds of Christ, from the Waldburg-Gebetbuch in Stuttgart.  Looks like contemporary art, you say?  Nope.  1486.
(Image from Wikipedia) Heart-shaped book of hours, from either the 15th or 16th century (the page where this was posted is not clear about which image goes with which caption).
(Image from Damien Kampf) Sheet music for a love song, "Belle, bonne, sage," in the shape of the heart as we draw it today, from The Chantilly Manuscript, c. 1350-1400.
(Image from The Public Domain Review)

German deck of playing cards, 1545.  Note that the heart suit looks like a heart, while the I'd guess to be spades looks like ivy.
(Image from Wikipedia) Emblem of two hearts on fire, from Devises et Emblemes Ancienees & Modernes, in 1699. This might be another one of my favorite depictions of love. We are our hearts on fire, traveling over everything and zooming through space and time together.
(Image from The Public Domain Review)