I'm thinking I might do some Christmas-related entries. I don't know yet if every entry I do this month will be about a Christmas topic. That might get a bit tiresome. Or we all might enjoy it. We'll see. But for right now, I'd like to talk about reindeer. A reindeer, doing one of the things reindeer love best -- eating.
(Photo from the Polar Trec)

Reindeer, headin' down the highway. Probably looking for more food.
(Photo from the Wonderopolis)

This reindeer herd lives in Sweden.
(Photo by Mats Andersson)

This is George. He lives near Palmer, Alaska. You can see the velvet on his antlers. Velvet is a furry skin with blood vessels that covers the antlers until they are fully grown and hardened. When the antlers are hard enough, around August, the reindeer will rub off the velvet and the males will fight each other.
(Photo from Reindeer Farm's Photostream) 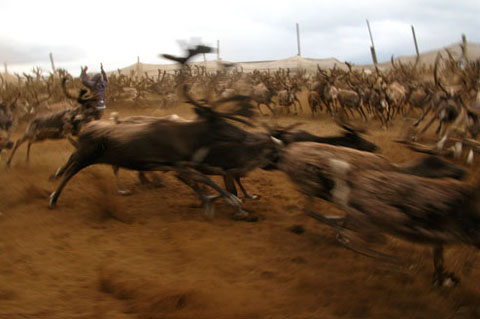 Very blurry photo of males fighting. It's hard to make out the details, but it gives you the sense of the herd as well as the fight.
(Photo from Microkhan)

A reindeer fawn named Thunder, only a few days old, from Knoxville, Tennessee
(Photo from Reindeer Owners and Breeders Association) Female reindeer and fawn, both with antlers. Since the fawn's are just sprouting, it's probably about a year old.
(Photo from Wonder Club)