I just bought two poinsettias, one for home and one for my office. I didn't go for the usual red; I chose pink with gold sparkles. That sounds awful, but they're actually quite pretty. 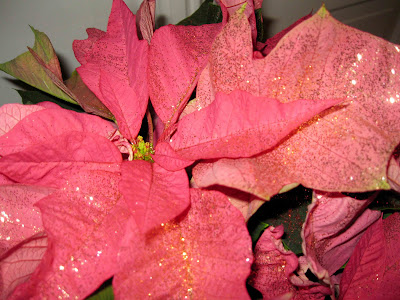 (Photo by the Apple Lady)

You can order a red poinsettia like this one, and have it delivered to Romania, if you order it from Romanian Roses. It'll set you back a mere $57.77.

Greenhouse technicians care for the thousands of poinsettias in varieties of all sorts that are displayed at Rutgers' George H. Cook campus greenhouse each year.
(Photo from Rutgers)

The flowers are the tiny little things in the center of the colored leaves.
(Photo from Our Ohio)

The flowers on this poinsettia are fully open and there is a sprinkling of pollen on the surrounding leaves. Best to choose a different plant to take home.
(Photo by Old Shoe Woman, sourced from Flowers Florist Information Directory)


Taking Care of a Poinsettia

Oh, dear. I've chosen plants that were crowded together, and it was really cold and windy when I carried the plants home, and I watered them. I suppose they're right now dropping their bracts all over the floor downstairs. 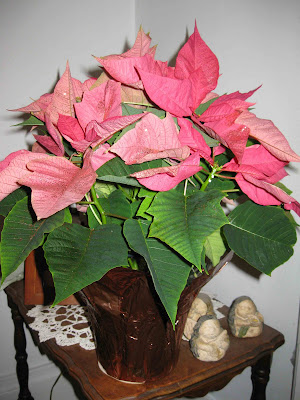 More signs I chose wrong -- the leaves aren't darkly colored all the way out to the edges, and some of the bracts are curling up. I should've consulted the Daily Apple before I went to the store.
(Photo by the Apple Lady)


Sources
University of Illinois Extension, The Poinsettia Pages
Steve Whysall, Getting your poinsettia across, National Post, December 5, 2009
Smithsonian Institution, Poinsettia Fact Sheet
The Gardeners' Network, How to Grow and Care for Poinsettias