The only problem is, anatidaephobia is made up.  By Gary Larson, in fact, in this cartoon: 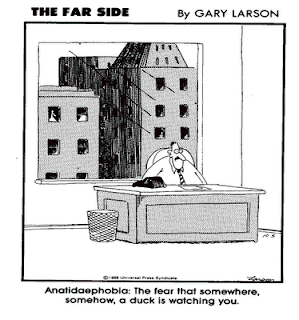 
The few dictionaries that list the word at all cite Gary Larson, as in the following definition:


anatidaephobia: nonce-word  the fear that somewhere, somehow, a duck is watching you [coined by Gary Larson, The Far Side]

"Nonce" means that this word was coined for this one occasion only.  So it doesn't exist.

Maybe it's obvious to most people that all those articles getting passed around are extending the joke.   But I don't think it's obvious to everyone.  That original Associated Content article, for one, seems to take it pretty seriously:


As with all phobias, the person coping with Anatidaephobia has experienced a real-life trauma. For the anatidaephobic individual, this trauma most likely occurred during childhood.

Perhaps the individual was intensely frightened by some species of water fowl. Geese and swans are relatively well known for their aggressive tendencies and perhaps the anatidaephobic person was actually bitten or flapped at. Of course, the Far Side comics did little to minimize the fear of being watched by a duck.

Sounds like the article of that author meant people to take it seriously, doesn't it?

The people who are members of the facebook group, however, Anatidaephobia -- the fear that somewhere, somehow, a duck is watching you seem to be fully aware that it's a made up word.  Judging by the photos they've uploaded, they are thoroughly enjoying the joke.

These guys take the joke to its furthest extent, having produced a rather too-lengthy mockumentary about people who suffer from anatidaephobia and the therapist who promises to cure him.

Gary Larson made up another phobia: Luposlipophobia, or the fear of being pursued by timber wolves around a kitchen table while wearing socks on a newly waxed floor.

A site called English for All has an extensive list of phobias, the real and the made up.  Keanuphobia might be my favorite among the made-up ones.