It's that time of year when the forsythia bushes are beginning to bloom.  I saw the first one of the season blooming in my neighborhood the other day. 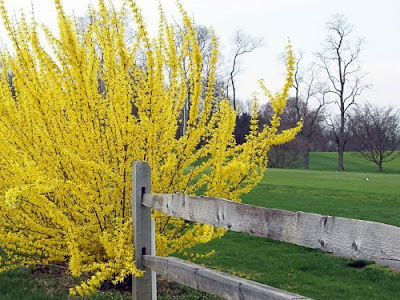 Forsythia blooming its nice, bright yellow flowers when few plants aren't doing much of anything yet.
(Photo by Arielle from Flickr, sourced from Country Gardener)

Botanists would say these blooms have 4 lobes, mostly in clusters of 2 or 6. The layperson might say they look like golden bells.
(Photo from Garden Calendar)

Forsythia grown in a border
(Photo from The Gardener's Network)

Because they're easy to care for and because of their bright, cheerful flowers, forsythias are a favorite with home landscapers.
(Photo from Home Interiors Junction) 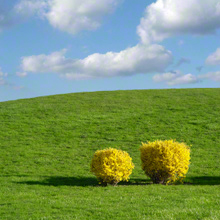 Dwarf forsythias are a popular variety because they can be grown in tight spaces. The dwarf will only reach about 2-4 feet high.
(Photo from Brighter Blooms)

Bluebirds are a welcome sight, too. A bluebird on a forsythia branch must surely be the best kind of good luck.
(You can buy a print of this photo from Marie Read Wildlife Photography for $45)